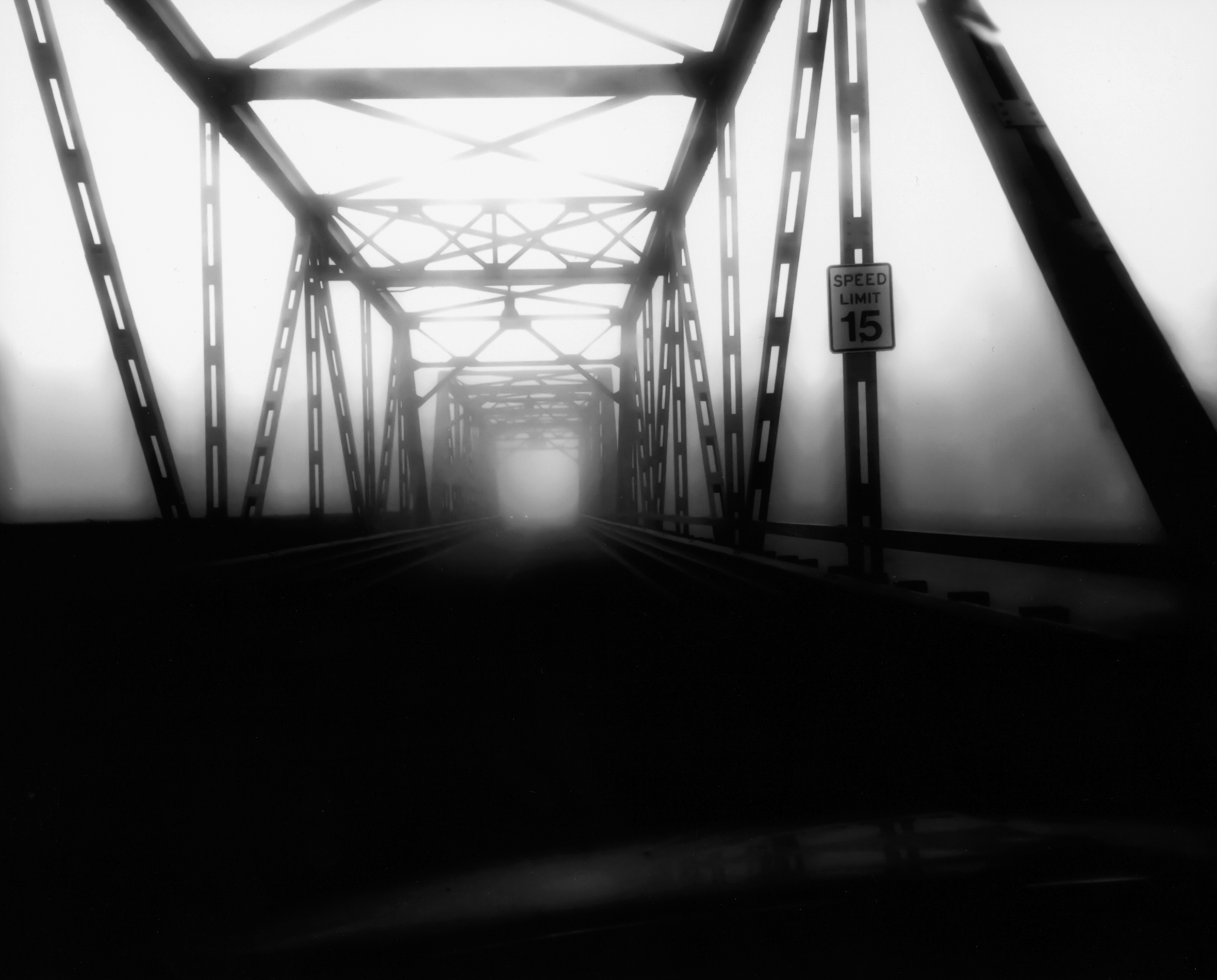 It seemed like a good idea when you saw him on the ledge, poised on the other side of the guardrail and staring down at the water. It was nighttime, or almost nighttime, daylight falling into a tailspin of dusk, and the road was empty, and you nearly didn’t see him at all. But when you did, you slowed your car. You pulled over some twenty yards past him and doubled back on foot, heart thumping, mouth dry, running like when you were a sprinter on the high-school track team, and then you leapt over the bridge’s rail and put your hand on his jacket, and you felt something hard underneath — broken-up lumps of cement block, you’d later learn — and then you bunched the fabric of his jacket in your fingers and gripped it tight and tugged him back.

You didn’t stop to think about what you were doing, because what you were doing was right. You knew that. The idea of being a hero, of having your picture in the paper, of being interviewed by television-news crews, your neighbors as well as your coworkers seeing it, not to mention your wife’s family, including that stupid, son-of-a-bitch, know-everything, Oklahoma-shit-kicking-rancher of a father-in-law — no, that was never part of the decision. The reason was that there was a life and it was about to end, and you saw that and responded. Simple. It wasn’t a moral objection either. You’re not one of those who believes suicide is wrong. You know there are times when it’s justifiable, like during prolonged terminal illness, or after terrible accidents or medical procedures gone awry, times when it’s likely the only humane solution. But the truth is you’d never really thought it through, never considered what, for instance, the distinctions might be. And, anyway, this guy was young. Or youngish. Couldn’t have been even forty. Certainly he had something to live for. Maybe a family. Something. Though, of course, and this is where it gets thorny, you do believe people have the right to make their own decisions.

So when you saw him standing there, looking out over the water, how were you to know he had been suffering for nearly twenty years? That his condition (and, thus, his life) was shit and getting shittier by the day? How were you to know that the doctors — by now he’d seen dozens — were more than stumped, that they were, in fact, dismissive and condescending, occasionally belligerent? As a relatively healthy person, how were you to know that, with the truly sick, when doctors don’t know the answers, they often blame their patients, thinking: Since I don’t know what this is, and since the tests are inconclusive, and since it isn’t listed in my manual of diagnoses, and I remember nothing of the sort from medical school, then the patient must be making it up. He looks sort of shiftless, anyway. You couldn’t have been expected to know that. After all, you’d seen the medical programs on television where they always figure out the cause of the ailment, and where ninety-nine times out of a hundred they find a cure. How could you have been expected to know that, if you get right down to it, there’s not been a single disease for which an actual cure — a bona fide, 100-percent-recovery, return-to-the-life-you-knew-with-no-ongoing-negative-side-effects cure — has been discovered in more than fifty years. You could not have been expected to know that to disguise this truth, the medical establishment has developed a smoke screen of officious, multisyllabic, Latin-sounding terms that, when translated, essentially mean “pain in muscles” or “intestinal disorder of unknown origin.” Really. You couldn’t have been expected to know that, in this modern era, most of allopathic medicine — discounting trauma, emergency, and anything mechanical — is a charade of addressing symptoms rather than underlying causes.

Taking that into account, how could you have been expected to know that this guy standing beyond the railing, pondering the steely, thrashing river below, had been through all this? How could you have known that he was once forty-five pounds heavier, most of it muscle; that he’d lived for the gym and the beach; that he’d eaten fanatically healthful foods and supplemented with vitamins and minerals, proteins and amino acids, living a practically ascetic life; that he’d done this religiously since the age of fourteen, until his body turned on him? Or that he’d once run his own business and had a few dollars socked away, not a fortune, but a nice nest egg, and that he’d lost it all? Or that his health problems had started a year or two after a tick bite? His unraveling was gradual at first. It began with numbness and tingling, then moved on to more-general weakness and headaches, muscle aches and fatigue, before the serious decline began. And, of course, there was the period when he had to be cautious with his movements, wary of exerting himself, careful to ease into chairs, a hand on either armrest, and to walk with a halting gait — this was when he was able to cover more than twenty feet at a time — so that his heart, that newly erratic pump, would not whip into a frenzy, a wild, racing thumpity-thump-thump that wouldn’t slow for days. By the end of the year he was coming home and falling asleep in his work clothes. He stopped bothering with his desk, now awash with papers, and his bills, which he threw into a pile on the floor, too tired even to open the envelopes. It was all he could do to get to work and get home. But he made it through. Somehow. Then he received treatment. He improved. He never got well, but he improved.

Ten months later, though, the symptoms returned. “That’s impossible,” he was told. The doctor held a book open to the page that described a cure after just ten days of medication, thirty days for severe cases. But look at him: he was still sick, a complete mess! So it must be something else now. Something new. He had taken the medicine, and that condition that he had before — it was cured. Now he had something else, it was decided, something that, coincidentally, exhibited the exact same symptoms, and he was getting worse by the day. Much worse. Certainly a divergent view of the science existed; the microbiologists who studied these pathogens painted a different picture, a less rosy and more persistent and nefarious picture, than the medical people. But he didn’t know that. And the infectious-disease physicians didn’t know that either. Worse, they didn’t make the effort to learn that he had, floating around inside of him, eleven infectious microorganisms that triggered a gross immune dysfunction, as he would discover later when finally landing upon a doctor experienced in treating this malady, a doctor who hadn’t yet had his license yanked for bucking the tide.

If these blinded-by-orthodoxy infectious-disease physicians didn’t know, well, then how could you have been expected to? Nor could you have known that he had gone into treatment, intensive treatment — which the mainstream medical authorities insisted wouldn’t work — and that it had helped for a few years, returning something of his life, although by then, as he would come to find out, it was too late. You could not have known that he had developed neurological symptoms. That his brain had turned on him. His gastrointestinal tract too. That he ended up too weak to prepare his own food, requiring a friend to drive down every two weeks, an hour and a half each way, to cook chicken and broccoli — the only two foods that did not paralyze his gut — and that this friend, a saint really, would buy and cook enough to last two weeks and then freeze it. All this would be done in his house with the windows blacked out using a special cloth, because, by this time, he had become so sensitive to light that he could tolerate only twenty-five-watt bulbs, and these turned down halfway with dimmer switches. This was when he still had the house, when he was still able to walk out onto the porch after dark to get the mail. But how could you have known that? Or that his girlfriend, who had vowed everlasting love and commitment, had recently, in a slow fadeaway designed to cause her the least amount of discomfort, walked out on him? You couldn’t have known. Nor could you have realized that, because of your efforts to rescue him, he would wake in a psych ward, heavily medicated, wrists and ankles bound, and that the two decades of suffering that had culminated in his decision to leap from the bridge and end this hell would now continue and increase in a way that was incalculable. Or that when you went to the hospital to visit, prompted by a comment from a newspaper reporter, he would refuse to speak to you, that in the silence filled with electrical bleeps and liquid drips and gum-bottom shoes, you would, before leaving in shame, see his eyes fill with tears.

No, you couldn’t have known any of this. So you did what any decent person would do. You reached out and grabbed his sleeve, bunching the fabric of his jacket in your hand, and you leaned back over the guardrail, jerking him back with the weight of your own body, both of you tumbling over the railing and sprawling in a tangle of legs and arms on the pavement, and you looked up and saw other cars stopping and people coming toward you, and you heard their voices, and then you were aware of his hot, sour breath against your face, and the cement-block pieces under his jacket, and the glare of headlights spiking into diamonds like sun flares, and suddenly a great sadness descended, a weight you’d never known, that squeezed your ribs and bore down on your heart and pressed the air from your lungs when the sirens announced themselves to your ears.