They say love inspires. Guess what inspires more? An enemy.

Every monarch keeps on a war footing all the troops which he might need in case his people are in danger of being exterminated, and this state of tension, of all against all, is called peace.

Can anything be stupider than that a man has the right to kill me because he lives on the other side of a river and his ruler has a quarrel with mine, though I have not quarreled with him?

He is a poor patriot whose patriotism does not enable him to understand how all men everywhere feel about their altars and their hearthstones, their flags and their fatherland.

There can be no progress without head-on confrontation.

Remember, confrontation is about reconciliation and awareness, not judgment or anger.

It is then he realizes that certain things loom larger than forgiveness and reconciliation: memory, for one, and history, bloody history.

It was the sort of anger that comes to a slow boil inside the hearts of good men who want justice, and finding it out of their grasp, decide vengeance is the next best thing.

Vengeance and forgiveness are about reconciling the accounts, but accounting is an ugly description of the tangled ways we’re connected. I sometimes think everything comes out even in the end, but an end that arches beyond the horizon, beyond our capacity to perceive or measure.

How can you love those who have stolen from you, assaulted or abused you, or tried to blow you up and completely destroy you? How can you forgive those who have kidnapped, tortured, and killed someone you love? Yet this is where reconciliation has to begin.

Perched upon the muzzle of a cannon / A yellow butterfly is slowly opening and shutting its wings.

Peace cannot be built on exclusivism, absolutism, and intolerance. But neither can it be built on vague liberal slogans and pious programs gestated in the smoke of confabulation. There can be no peace on earth without the kind of inner change that brings man back to his “right mind.”

In order to enter the path of forgiveness, we have to lose our feelings of both superiority and inferiority. Each of us has hurt another, each of us has been hurt.

Now there is a final reason I think that Jesus says, “Love your enemies.” It is this: that love has within it a redemptive power. And there is a power there that eventually transforms individuals. . . . Just keep loving them, and they can’t stand it too long. Oh, they react in many ways in the beginning. . . . They react with guilt feelings, and sometimes they’ll hate you a little more at that transition period, but just keep loving them. And by the power of your love, they will break down under the load. That’s love, you see. It is redemptive, and this is why Jesus says love. There’s something about love that builds up and is creative. There is something about hate that tears down and is destructive.

Do I not destroy my enemies when I make them my friends?

To recognize that failure at times is the common lot of all men, to see in ourselves and in others the traces of the primitive as well as the promise of the civilized, to admit that our friends’ patterns of life, although different from ours, are equally valuable, . . . to recognize that another may be right while we are wrong, is to attain . . . genuine inner tolerance.

We cannot love our enemies until we see those twin truths: God loves me. God loves them. 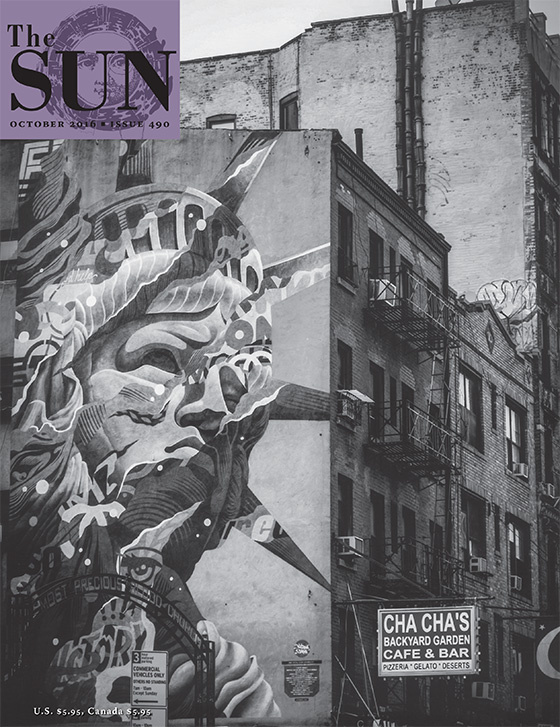 By Joe Wilkins
The Sun Interview

An Israeli And A Palestinian Make The Case For Peace

By Judith Hertog
The Dog-Eared Page

The Optimism Of Uncertainty

Embarrassed To Be An American