I left the house and walked to the corner. Maybe the bus would have a wreck. Maybe it would forget our street. But the big yellow machine rounded the corner. I was nervous as I boarded, nervous and embarrassed.

We were being bused to the heart of the white neighborhood. The buildings here were pleasant and new. There were a lot of pretty cars. We drove farther. Houses appeared, unlike any I had ever seen. They were new, clean houses, though not very large. Yet they grew larger and larger every minute. We came around a curve. I saw the biggest house. You could have placed half of a project block in its front yard. It resembled a castle, and had a long, twisted road leading up to its front door, then circling back out the other side. Who could have lived in that place?

The white kids I encountered later that day had risen to the scent of new clothes, fresh school supplies, and a hot breakfast. Their parents had made them brush their teeth and comb their hair.

The odds begin at birth.

Charles Murray’s controversial best seller The Bell Curve . . . claims that social class is largely determined by IQ, which in turn is determined by DNA. What drew my attention was the section where Murray pauses to politely denounce black schoolteacher Marva Collins’s fantastic claim that ghetto children had real enthusiasm for difficult intellectual work. . . .

I wondered why Marva Collins had excited him so. . . .

Finally, the light went on: If Marva Collins is telling the truth, [Murray’s] theory loses its credibility. Trillions of dollars and the whole social order are at stake. Marva Collins has to be lying.

Is Marva Collins telling the truth?

Thirty years of public-school teaching whispers to me that she is.

Your junior-high teachers don’t help. One calls you lazy. Another tells you that if you don’t shape up, you’ll end up pregnant, like all the other Mexican girls.

Your English teacher, Mr. H., is crazy. When nobody does the assigned book report, he waves his hands in the air and calls you all “yahoos” and “scoundrels.” You laugh at his antics. “You’re going to grow up illiterate,” he yells. “Actually, you are illiterate, and the sad thing is you don’t even know it.” He doesn’t call you savages, but he makes you feel like wild monkeys in the classroom.

He tries to civilize you with poetry. You read a poem about a raven who keeps quoting, “Nevermore.” You read Robert Frost’s “The Road Not Taken” and “Stopping by Woods on a Snowy Evening,” and you wonder what the big deal is about these guys who keep getting lost in the woods. You consider ditching English for the whole semester, but one day the only white girl in the class recites a poem, and Mr. H. practically weeps with joy. “You see,” he says to the rest of you. “That is how you recite a poem. Did you hear how lovely her voice was?”

We were like a troop of brothers. About nine of us would gather on the basketball court before noon, the August morning air still cool on our bare legs and arms. By one o’clock the heat would be torching us as we looted tennis balls from public courts or lifted packaged cakes off the back of unattended delivery trucks. Mainly we cruised Steinway Avenue, rolling by on our bikes like a hungry pride of young lions. When we decided the day should be an epic one, we’d cross the Queensboro Bridge into Manhattan. . . .

The camaraderie we shared was seductive, and for the first time in my life I understood what it meant to love someone other than a relative or the silent, pretty girl at the back of the class. These were my first true niggas, and my relationship to them was the initial demarcation of my blackness. I would’ve killed anyone who tried to take it away.

One evening about ten of us were hanging out in the courtyard of my grandmother’s building in the Queensbridge Housing Project. We had our bikes flipped over on their handlebars and were fixing flats, oiling chains, and trading parts. I haggled over an inner tube with a quiet, well-built kid named Ray. Our bartering turned sour, and we graduated to ranking on each other’s moms. I was only an average ranker, and when the crowd that had gathered began laughing harder at Ray’s jokes than at mine, I grew hot with anger. Ray let off several quick “yo’ mama” jokes, and all I could come back with was that I was smart and he was dumb, that I was brown-skinned and he was dark-skinned — powerful insults for any black person in the boroughs. Ray just threw his head back and laughed as if none of it fazed him. “But, nigga,” he said, “you talk white.” The crowd exploded, laughing so hard they looked as if they were dancing. I fumed. Even worse than being dumb and dark was sounding like a white person.

I think the reasons African Americans are more likely to want emergency end-of-life treatment are complicated. I can’t say for sure what’s behind it, but I would guess that if you come from a poor background, you are unlikely to have had good medical care in your younger days, which means you’re unlikely to have had a trusted family doctor, someone who can sit down with you and give advice when the time comes. Instead you show up in the ICU. Your family’s in crisis mode, and a doctor you’ve never met says you should remove your mother from life support. If we look at what’s happened to African Americans in the past — the Tuskegee experiment, for example, where doctors didn’t treat black people who had syphilis because they wanted to study the disease — we see that African Americans are justified in not trusting the medical system.

Physicians have no greater or lesser morality than anybody else, but they do have a wealth of medical knowledge: they know how the body functions, how to treat illness, how to alleviate symptoms, how to make people well. So their words are given greater weight. We trust them. . . .

We grant doctors that authority at our own peril. Their diagnoses can be wrong. And they have prejudices and biases, just like everyone else. What if a homophobic doctor tells a gay man with AIDS that only assisted suicide can prevent his suffering? That would be a deeply bigoted act, but one that could be covered with a veneer of supposed compassion.

“In the Name of Compassion,” Wesley J. Smith, interviewed by Mark O’Brien, February 1999

When I was a newspaper reporter in the 1960s, I frequently wrote about race and poverty. I interviewed scholars. I spent time in poor black neighborhoods talking with teachers and social workers and advocates for welfare rights. But I wasn’t black, and I wasn’t poor. Later, after I started The Sun, I lived for many years from hand to mouth. But I had two college degrees and marketable skills, had I chosen to market them. I may have been broke, but I never felt trapped in poverty, or a part of a permanent underclass. So what can someone like me really know about being black and poor in America — about the way racism crushes a man like a monstrous wave, and poverty, like a razor wind, strips him to the bone?

A couple of guys invite me to join them at the sauna to continue the conversation. The place is packed. Once the sauna’s good and hot, the one Native American at the gathering — a soulful, taciturn, middle-aged man named Dave — brings out his pipe, fills it, invokes the four directions, and passes the pipe around. When he first received the pipe, he says, he dedicated it to unity. After the pipe has made its rounds, Dave sends an eagle feather around the circle, and each of us voices a prayer while holding it. It’s no big deal. There’s no special hush or excessive reverence. But here we are, eighteen naked men — black, white, Jewish, gay, Native American, Asian, Indian — in a sacred ceremony late at night at the edge of a lake under the crisp stars of West Virginia.

Is this just a utopian fantasy we’re enacting, a blip on the radar, a moment out of time before we return to the catastrophic misery men have made of the world? [Or] are we the proof of a change that has already occurred?

Columns, chains, lashes, rope: the lengths to which we will go to keep the pedigree intact.

Let me count up the rows, tally the sums, match the figures in the files with the letters in my closet. Let me unplug the laptop and pack up my notes. Pay for my photocopies. Sign the ledger and thank the librarians and send the records back into the dark. Retrace the route to my hotel, the one with the queen-size bed and the minifridge, the breakfast buffet and the free parking. Draw the curtains, bolt the door, slide under the covers. Close my eyes. Imagine that if I had been born in my ancestor’s day, I’d have done otherwise. Imagine this changes anything. 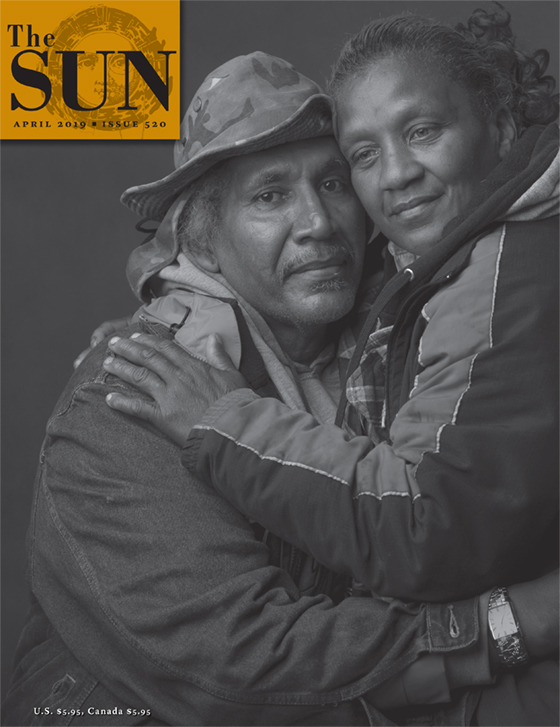 By Jacob Aiello
The Sun Interview

Not So Black And White

Dorothy Roberts On The Myth Of Race