Best Friends | By Our Readers | Issue 62 | The Sun Magazine
close

The last I heard of Jean she and her husband were heading for the beach where he would finally open up his medical practice. The last I saw of her — we met in a card shop one afternoon — she was having an affair. “It’s taking Ben so long to grow up,” she complained, distressed, wanting to love only him. “He’s always out on the basketball court when he’s not studying some disease.” That was five years ago. They are still hanging in there, I hear.

Three years before that I was at the university and she worked as a secretary in the adjoining medical complex. We had been strange friends in high school, engaging in long, philosophical conversations on the phone, but not having much to do with one another at school. We ran with different people, our curriculums were different, our dates never intertwined. Our lifestyles differed radically — after high school we slid easily, without question, into our established roles. Our paths seldom crossed. The town was two different worlds for us.

In my junior year I got pregnant. I went to the university counseling service to arrange an abortion. The counselor was a friend of hers, it turned out, which was a comfort to me. Eventually I showed up at the university clinic, where they were doing experimental work with saline abortions. I was terrified, but it was free; better than being terrified and paying $500 for it, too.

The doctor punched a little hole in my abdomen and inserted the tube through which the saline dripped. I think I was in shock, feeling violated, actually punctured. My contractions came, strong and hard right away. I had no idea what to expect. I had read nothing. It hurt and I was totally unprepared. Fortunately their policy was not to let their guinea pigs suffer and the nurses began hitting me up with demerol. The next 48 hours — for it was that long before it was done with — were one long dream. The pain was gone, but I was never sure if I was awake or asleep; it is the nature of that drug to erase that distinction.

At one point I woke up and there was Jean, in the chair next to my bed. Just sitting, being there. The counselor had told her where I was. Visitors were permitted all the time and some of my friends had sent candy bars and magazines, but no one had showed except Jean, whom I had not seen in three years.

I must have fallen asleep again, because I remember waking up after the doctor had checked on me. I looked at Jean and said, “He thinks we are sisters.” It slipped out of my unconscious and through my lips without my willing it — one of those lightning flashes that cements worlds forever. That’s all I remember saying. I have no idea how long she stayed or when she left. My mind swam back and forth in the strange twilight consciousness.

I only saw her the one time after that — in the card shop. Small talk. Shyness but gladness. Neither of us could say, “Remember when. . . .”

I’ve thought of trying to find her. I know the town she’s in. But something in me resists. Every so often I meet friends from long ago and I am seldom prepared for the changes, the compromises that show — even though I am the same as they, compromised. Sometimes I’d rather accept the memories intact and wholly good and clear as they are, unimpinged upon by the present.

I am a woman new to the working world, a year out of Northwestern University here in the Midwest. One might call me a “new” independent woman seeking a secure living and happy life — alone or with someone else.

In a high pressure graduate school, I discovered what needing friends is all about. At that time, I threw out my pride and begged help and companionship. Viewing myself as a pitiful figure I didn’t think anyone could help — but they could and they did. Sometimes that kind of communication is what friendship is all about.

How independent must you be? It’s easy to build walls rather than bridges in the name of career growth. Independence seems to be the name of the game, no matter how heartless you may become. Best friends can keep you from that unhealthy trap.

One of my best friends is me. The others are scattered all over. Each time I am lucky enough to see one of them, a different facet of myself comes alive.

A few weeks ago I drove four hours to spend a weekend with my best friend. Being with her is always one of the most comfortable, secure, and happy times for me, and I know it is the same for her. We had a wonderful agenda planned — a Sunday brunch; a long, windy beach walk; and an afternoon of pumpkin-shopping. In between the activities there is talk, lots of it, the real kind. Open your heart, bring out the secrets, laugh, make a cup of tea, talk more, listen, and almost always understand. Part of our being friends is that there is the common thread of memory. We have been a pair for as long as I can remember — my best friend is my own sister. Some people can’t believe it; they tell me about how distant they are from their own sisters, how they were never close, that they really don’t like each other.

My sister and I are very close in age, and this has led to some problems in the past. High school was an interesting time, mutual friends and mutual mistakes — big ones at times, but more material for us to reconstruct now. I was frequently and secretly in love with her boyfriends and she was frequently and secretly stealing my clothes and records. We fought at every bend in the road for a while, but came out of it true soul-mates.

Since I have had “best friends” and lost them, I don’t like that phrase anymore. It seems naive, dangerous. But when your sister is your best friend, that is an exclusive arrangement which is pretty hard to break up. Maybe it runs in the family, since my mother and my aunt were as close in ways as my sister and I. There is a feeling of such absolute love and trust, an effortless fact taken for granted, a natural certainty. When we are together, no matter how long has passed, we fool around and are wild and silly: no joke is too sick or cruel, no horrible secret is held back. When I have been sad or hurt, even after a wound has been healed by time or other friends, there is nothing like the relief of sharing it with my sister. Her seal of understanding and support never fails to mend. I think that is what is meant by the strength of love. 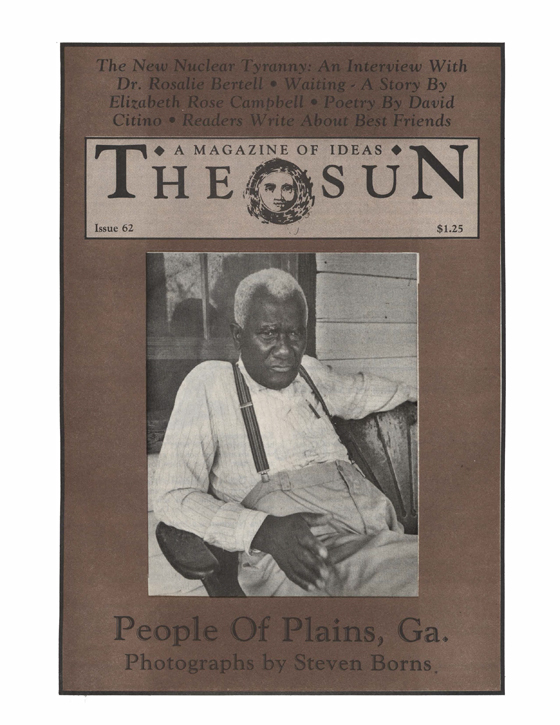 An Interview With Dr. Rosalie Bertell