How Things Came Into Existence

Once on a time long ago in that part of the present that is hidden from general view and which lies in the unreachable future, there were two, only two beings. Where they came from I have no idea and probably they didn’t either. Who could have told them? But I am certain that they were named Mr. Nous and Mme. Ordinat. They lived in a place called the Abode of Becoming. I really can’t say what it was like, because I’ve never been there. No doubt, though, it in no way resembled where you or I live.

They were a strange pair — Mr. Nous and Mme. Ordinat — not exactly opposites but definitely very different each from the other. Mr. Nous was a thinker, a muser, an imaginer. Nothing was more pleasurable to him than to spend his day thinking through long and elaborate thoughts. About all that was heard from him from dawn to dusk (if there were the daily cycles then) was “Hmmm!” “Gee!” “I never thought of that before!” “Absolutely fascinating!” His mind seemed to supply all the entertainment he could ever want.

Consequently, Mr. Nous was not much of a doer. And that royally irritated Mme. Ordinat, the kind who’s always doing something. Her shadow was threadbare from keeping up with her.

“Don’t you realize,” she often said to Mr. Nous, “that across the threshold of our Abode lies the whole realm of Existence? And you’ve never given it so much as a good long look. Why don’t you go out there with me now while I do my work. You could use the exercise. It’s not healthy to stay cooped up in here, thinking all day.”

“What’s out there to be seen?” he would ask. “Existence, sure — lots and lots of it. But it’s absolutely empty. Nothing in sight as far as the eye can see. No, thank you. I’d rather stay here and think my thoughts than waste my time traipsing about a hollow Existence.”

Annoyed at that, Mme. Ordinat would smack her measuring rod on the floor of the Abode and then charge out into Existence to do her work.

There was plenty there for her to do. She had given herself the job of measuring that vast realm. Only someone like Mme. Ordinat with a passion for order would have attempted it. Although her measuring rod was very, very long, she could lay it down, one length after another, a trillion times and still find the greater part of Existence lying ahead of her, yet to be measured. The worst part of it was that each day she had to begin all over again; when she took her rod home at night, there was nothing left in Existence from which to continue her measurements the next day. You or I might have given it up as ridiculously futile. Not Mme. Ordinat. Every day she set out annoyed with Mr. Nous and returned every evening completely exasperated by her work. But she never gave up, bless her.

Now one day while she was busy with her rod, Mr. Nous found himself embarked on an especially productive line of thought. What he was thinking about was the universe with its myriad forms and functions, all things and doings that have ever been or will ever be but were then not yet except in his imagination. He thought about stars aflame at birth and old men with stories to tell, about little girls giggling and splashing in mud puddles and the refraction of light in emeralds. He thought of love and hate, rivalry and reconciliation, pleasure and pain, want and plenty, red and yellow, blue and green. He thought what it was like to make something with your hands or to feel the hand of someone you loved turning cold in yours. He thought of redemption. He thought of all these things simultaneously and yet with an appreciation for the separateness of each, the way you might regard polished marbles poured out of a leather pouch. It was by far the greatest thought he’d ever had and it overwhelmed him to silence.

It so happened that this day had been an especially trying one for Mme. Ordinat. Twice she had dropped her measuring rod and quite lost her place as well as her count. And then she had come on a stretch of Existence that wasn’t flat like the rest but was instead corrugated like the surface of a huge washboard. How could you really measure it with a stiff, straight rod? If you laid the rod across the humps there were all those rounded valleys between that went unmeasured. She had tried smacking the corrugations a few good ones to straighten them out but to no avail. The way she’d tossed her head had almost ripped the neck of her shadow.

A soft word, it is said, turns away wrath. Mme. Ordinat’s required a craven plea for mercy to divert it. When only silence greeted her at the Abode, her rage swelled like an organ’s blast in a vacant cathedral.

“Look here,” she said, brandishing her measuring rod, “when I say hello to someone I expect a reply! My rod has had enough practice on bumps today to flatten that hollow head of yours if you don’t answer me!”

Even had he heard her, Mr. Nous couldn’t have broken off his thoughts about the universe; they were far too grand and compelling. Mme. Ordinat saw the look of bliss on his face and assumed he was mocking her. The measuring rod came down with a loud smack on the crown of his head.

What a smack it was! Tears shot out of his eyes and over the threshold of the Abode and these were the very first raindrops that fell on Existence. He cried out a thunderous cry that echoed far beyond the Abode and this was the very first thunder in Existence. As soon as the passing of pain had let him regain his sight, he noticed something else, something quite extraordinary had happened: Mme. Ordinat had knocked the thoughts right out of his head. They were running helter-skelter all over the Abode of Becoming, up the walls, across the ceiling, everywhere.

“Shoo! Shoo! Get away!” Mme. Ordinat shrieked as she made her stand in a corner, smacking at the whirligigs and fizzpops that played up and down her like tiny frolicsome puppies. “OOOeee!” The more she smacked, the more they capered across her body — the brave little souls. “What are these horrible scudders, anyway?” she cried.

By now the daze had worn off and Mr. Nous stroked his chin to think how he might explain them to her. It was no good telling her how they had existed in his mind, because obviously that was no longer their condition. Luckily, his imagination came to his rescue. He did what many have done since, when their thoughts were running free and needing some order. He did what I am doing now. He began with “Once on a time . . .”

It was a very long story he told, the longest that will ever be, as big as the universe and all that will ever happen in it, full of episodes great and small, with plenty of digressions and not a few redundancies. Mme. Ordinat seized the opportunity to rid the Abode of the infestation. As the storyteller went on, she shoved the appropriate subject across the threshold and into Existence. With her measuring rod she prodded each to act out its own story just as Mr. Nous told it. And so will she be doing until the end of time.

One thing needs pointing out. Mr. Nous told his story, as is the custom, in the past tense. That means that the one I have just told is happening actually in the distant future from us. If we ever reach that time — and I have my doubts — we’ll find ourselves, it seems, at our beginning. That hardly makes good sense. But then, neither did those corrugations Mme. Ordinat found in Existence. 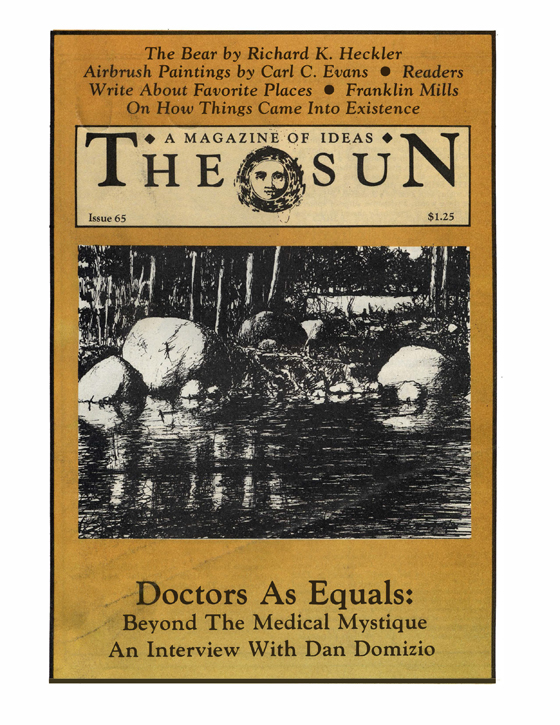 He Took The Doorknob With Him