Tonight I heard a man sing the most beautiful song I ever heard. At first I thought it was a fight, so I crossed over to the Post Office side of the street just to get out of the way. But even from a block away, I’d never heard such a voice coming from a grown man — so full and rich and so hurt way down inside like a tender child. For some reason I didn’t look at his face even when I passed him by, because it was too intimate.

There’s a woman, too. And she says:

And he starts to wail:

“No. He put your things outside. No.”

But he’s still telling it from the heart:

“You done me wrong,” and his voice is full of all the stars in the universe and all the dreams of love that are snuffed out like an annoying candle still burning downstairs at bedtime.

And I turn the corner and I watch my feet walking along and I think, “Christ, what are half the people in the world doing to the other half, and why, for God’s sake, why?” Three college guys come out of a door and crash into me and aren’t sorry because they’re so excited about something, something good, no doubt. My heart hurts, and I think maybe I’ll see someone I love in the next block and we’ll go home to my house and open a bottle of wine.

About that time one of the black Christians in front of the bank comes into left-periphery vision, and I hear her say whatever it is they say when they ask for money. And without thinking I put down my bag and start unzipping it while she says “Praise the Lord.”

Suddenly I remember how earlier in the day I spent five minutes going through petty cash trying to decide whether or not to borrow 35¢ to take the bus to work Friday morning. Now it sounds petty, but since I’d spent all weekend deciding never to borrow a cent from anyone, ever again, this 35¢ is a big deal. I only took it because I got the flu and I wanted to sleep in.

“I haven’t got much,” I say, hopefully, as if she might know the whole story.

“That doesn’t matter,” she says. “Every little bit counts. Are you ok tonight?”

I think about saying, “Hey, there’s this guy over by Hector’s. . . .” But I say, “Yeah, fine. Here’s whatever there is . . .” and dump my purse in her hand. She’s got the right idea and the right thing to do. And I think, “You just go on doing what you know to be true, and you don’t look to the right or to the left because that’s when you walk right off the path into the jungle.”

At home I feed the birds and the mouse and the rat and have brown rice and veggies and butter beans and a bottle of Cabernet Sauvignon for dinner. I sit on the edge of the bed and start crying because it isn’t that your mother loves you, it’s that you love your mother. People always think that what they feel is someone else, but everything comes from inside. I’m really drunk and I hear the rat ratting around in the kitchen and I yell, “I love you, Rat.” And Rat jumps on R.’s or S.’s old rum bottles and starts running his feet like it was Mardi Gras, and I love my Rat as much as anybody ever loved a Rat, I guess. He’s just a regular guy who’s getting clean on a good diet, not too yin and not too yang. This weekend I’ve got to go to the co-op and stop feeding the health food store all my hard-earned cash (blood money). Artists are all harmless. It’s their prime trait — ahimsa, “does no harm.” Just fooling around. Making something in the hopes it’ll make somebody care, notice, hopeful, sad, happy, loving. Endlessly narcissistic and irresponsible, but still on the path if their luck holds. 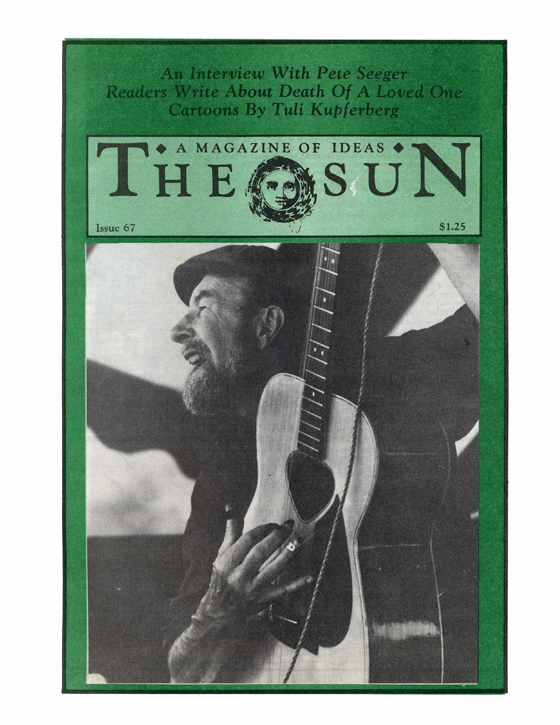 The Word Gets Around

An Interview With Pete Seeger

Excerpts From The Incompleat Folksinger