I’ve been criticized by two friends for a recent column (Issue 78) in which I suggested that Ronald Reagan was human, like the rest of us, and questioned the assumption that society’s ills are something “out there,” that we, and the problems we see, are separate.

In their eyes, I was politically naive and philosophically glib, pulling rabbits of love and light out of a New Age hat with a lot of hocus-pocus, and thus obscuring the real work of social change. Also, they said, Reagan is a bastard.

I don’t want to argue, or defend Reagan, and who isn’t naive and glib at times? In fact, by my own standards of fifteen or twenty years ago, I am, today, a politically ignorant man — unknowledgeable about the issues, getting my news mostly by word of mouth, a member of no organizations, a cipher, a stone. The contests of the great rarely interest me, nor crusades to topple the great. The Left and the Right run their rag across the window of the world, motion me closer for a better look. I’m unmoved.

But not uncaring, and not unaware. I look at the world, but not through the stained glass window the newspapers call reality. There are other windows, opening on other vistas, each framing reality in their own limited way. Some look out, some look in — inside the psyche, where the politics get really interesting, where we quite literally create a world of possibility or impossibility, love or fear.

It’s not that the inner is more important than the outer or that spirituality takes us deeper into politics; it’s that they are inseparable. The tree of the world — its trunk and branches and twigs and leaves — is only what’s above ground, visible, “realistic.” The roots are another story. No matter how much we prune and trim, or bulldoze, the living truth breathes darkly, out of sight. To go down into it is to meet ourselves — not just the springtime flowering of our desire for social justice, but the gnarled roots of ambition and competitiveness, the nay-saying, the twisted griefs. Either we make peace with ourselves, or we keep projecting our inner dramas, making heroes and villains of ordinary men and women whose only sin is that they are, perhaps, more deeply mired in fear and ignorance than we are — or simply better situated. Haig threatens 300 million Russians; we shake a fist at the asshole who cuts us off at the light.

I’m not suggesting we do nothing about poverty or environment despoliation or nuclear arms. But unless our actions are motivated by love — not an abstract “love of the planet,” or a romanticized brotherhood (or sisterhood), but a genuine love rooted in our oneness, and extending to everyone, regardless of how forcefully we oppose their actions — we end up simply moving around the pieces, obsessed with the drama of getting things done. This is the lesson of most revolutions (in Nicaragua, the Sandinistas, great hope of the democratic left, have shut down the opposition paper) and of all our lives — in Washington and Moscow, at the office, in the bed, at New Age gatherings and old age homes: only the names and faces change.

What doesn’t change is the eternal validity of our being and our need to honor who we really are — in what we do, and don’t do, in the kindnesses we show ourselves, and others. There’s bread for the belly and bread for the soul, bombs that explode and bombs that implode, love for a special someone and love that leaves out no one.

How much I liked your editor’s note in Issue 80 of July 1982! What I like about your approach is that it takes away a lot of anger and lets us begin to see problems more clearly. That’s uncomfortable for a lot of people (including myself) who are used to thinking in terms of Right or Left. But in the long run, it’s a lot more useful for humanity.

Hastings Wyman Washington, D.C.
More Letters
Thank You Your donations helped to keep our ad-free, nonprofit magazine in circulation last year, funding everything from production to distribution. Learn how you made a difference last year. Learn More 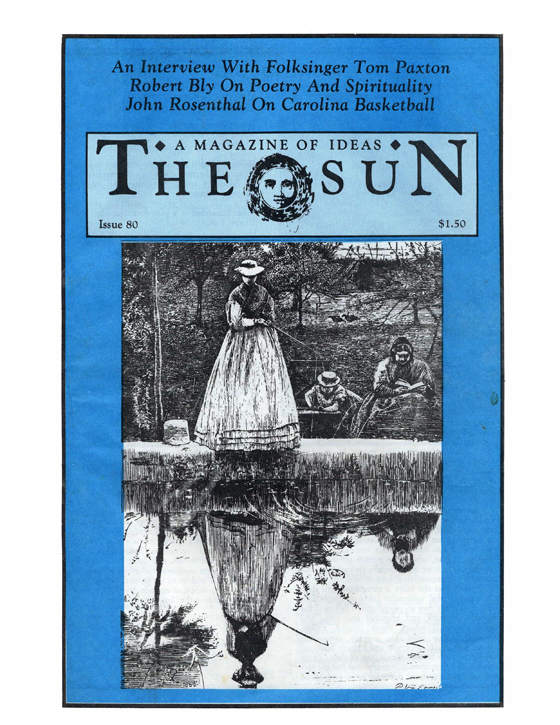 An Interview With Tom Paxton

The Witch, The Swan, And The Middle Class