There was an angry sky above 42nd Street on Hiroshima Day as Marianne and I walked to the demonstration. The men who shine shoes on Eighth Avenue were just starting their day. “Good morning, I guess,” one of them said as we passed.

We walked past the movie theatres on 42nd Street: “Humanoids From The Deep,” “Kung Fu Freedom Fighters.”

We ourselves were about to perform a live love act. We met our group under the word “Grace” on the W.R. Grace building. A woman passed covered with grey paint.

“Have you seen the shadows?” she asked.

“What shadows?” someone asked.

The woman left and we wished her a good day. Then the eight of us held hands in silence. There is a strength in silence.

We walked across the street to Bryant Park where the other groups were preparing. We stood in a half circle as a woman sang “Hiroshima Lullaby”:

Ed Hedemann of the War Resistor’s league called off the names of the groups as it was their turn to leave.

When we got there, it was surrounded by police. Inside, barricades, a religious service going on. Men and women knelt on the ground as a minister said: “We confess our nation’s pride in winning the race to develop the bomb. Forgive us, Lord, for wanting to be the best at destroying life.”

We sat down in front of the entrance to the building. A man in a suit walked up.

“I have to go to work,” he said, a little angrily.

“Step over them,” said a policeman behind us.

The man in the suit hesitated. Then he stepped over us.

The service continued. “The Lord hears the cry of the poor,” people sang, in a large rolling voice. “Blessed be the Lord!”

A policeman made an announcement: “Those blocking the entrance to this building are subject to arrest. . . .” Police began picking people up and taking them away. The service was not yet over.

A policewoman came up to our group. “Would you like to stand up or be taken away?” she asked.

“Actually,” said one of us, “we’d like to sit here a little while.” She nodded and walked away. We sat and held hands in silence. Then we chanted Na Mu Myo Ho Ren Ge Kyo, a Japanese chant which means, “Everything is holy.” We were the last group to be removed.

Marianne was the last to be arrested. She was lifted up, chanting, looking into the sky.

“I felt so powerful,” she said later. “I felt like there were hundreds more of us.”

We were put on a city bus, where the service continued. “We pray no more Hiroshimas, no more Nagasakis,” the people were saying. After the service, they passed around cookies.

Daniel Berrigan was on the bus with us. He’d been arrested dozens of times. I asked him why he did it.

“I got arrested,” he said, “because we have to choose between the bomb and the children.”

They took us to the 33rd Precinct and in a few hours we were out, with summonses for disorderly conduct.

That night, on the Upper West Side, Marianne and I saw bright young couples, deep in conversation, stepping over the shadows of the Hiroshima victims.

First Avenue was alive that night in a way I would hate to be alive. Even the avocados in the fruit and vegetable stands seemed too bright, too green. The New York Posts on the newsstands seemed suddenly humble. The disco music strained, but it couldn’t be loud enough.

I walked quickly — I was an hour late for a performance workshop. I felt the energy in the air, but I didn’t think that anything would happen. At 7th Street, I saw that something had: four ambulances were lined up neatly in a row, with five police cars behind them. The ambulances looked white and innocent, like toys, in the empty street.

I asked a little guy with a moustache what happened.

I stared at the ambulances. Next to them, on the street, was a pool of liquid. It was a lovely dark red.

“And they didn’t even take him to the hospital! It’s crazy!” the man continued.

A woman in a grey coat spoke up near him, impatiently. “They have machines in there. They probably just don’t want to move him.”

The little man looked at the woman and said nothing.

I closed my eyes for a moment, then I walked off, to the University of the Streets.

Walking down 7th Street, I came upon what was either a person or collection of clothes crouched in a doorway. No part of the person was visible. After staring at it for a while, I decided it was human; the arrangement of clothing was too sequential.

It suddenly became important to me to feed this person. My guru had said recently that we must feed homeless people.

I walked back to First Avenue — the ambulances were still there — bought a grapefruit, and came back. I stood over the person wondering where to put it — in the hand? by the foot? — when a young black woman stopped and asked me for a light. It happened that I’d found one match on the street earlier that day. I fished it out of my pocket and gave it to her.

She noticed my grapefruit.

“Oh, that’s nice,” she said. “Here, let me wake him up.” She pushed at the bundle of clothes and the man stirred. She took the grapefruit and offered it to him. He shook his head and walked off. “No,” he said. “No, no.”

“I’ve seen him my whole life,” the woman told me. “He never leaves this block. People look out for him. They cash his check for him at that bar; he keeps his money in his hat.”

She came to her doorway and went in, and said goodnight. I could tell that she was just a little afraid that I would follow her.

I walked back to First Avenue. There was a bar on the corner filled with people with short haircuts. The bar had big windows and almost no decoration. All the walls were white. Every person in the bar was talking. A strange music mixed with the voices. It was kind of accordion music. The man was still dying fifty feet away.

I went back to the small crowd and closed my eyes. Through my eyelids I could see the lights on the police cars turning. I felt the power that is at the center of everything.

When I opened my eyes, the ambulances were gone. Two men were walking back from the police cars. They were smiling and shaking hands. They had become friends while watching the accident. “I’ll see you around,” one of them said to the other. 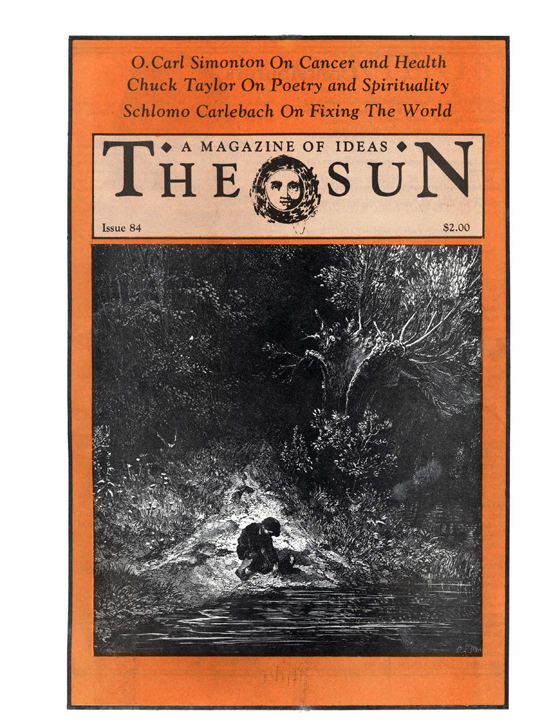 An Interview With Schlomo Carlebach