Luz lived with her mother and sister in the Raisin Capital of the World. In September, when the grapes were drying between the vines, the whole valley smelled of wine. It was at this season that the most beautiful woman in the town, Maria del Carmen Pacheco, looked her best. As she walked, shoulders braced, along the streets where the leaves were accumulating in drifts, she seemed to glow, her skin touched with a reddish gold. Luz loved the Fall even more than Spring.

Every day Luz watched Maria del Carmen go to work at the Sun Maid plant. She was a secretary, and wore full black skirts and pale starched blouses. Luz looked for her from the window in the morning and after school loitered in front of the steps to see her go by. She put the beans and rice on early and turned the flame low so that supper would be ready by the time Elena and her mother came home from the packing sheds. Then she went outside to wait for Maria del Carmen.

It seemed to Luz that her mother and Elena talked about Maria del Carmen more than they had ever done. She was in charge of the arrangements to send to Africa the raisins donated by the Growers’ Cooperative. “She read in the paper that the starving little ones take to them well even though they’ve never seen raisins before.” Luz’s mother nodded at the food on the table. “When I was young I thought we were hungry. But at least we had something to eat every day.”

While Elena washed the dishes, Luz and her mother went to SuperSave. It was hard to think of a famine with so much food on the shelves. They were stacked with boxes, cans, packages, the fresh and the dry. Luz looked at her mother’s padded buttocks and tried to imagine where her hip bones would stick out. Her mother’s eyes were fixed on the raisins. At last she said, “I think we need some masa harina. Rosarita is all very well, but one day you may need to know the old ways.”

Luz knew very little about the old ways. She did not even remember much about the village they had come from. The last visit was the year after her grandmother died, and on the way home her mother quarreled with Uncle Ovidio in the cab of his pickup. Even from the back all the children had heard. Now her mother went to church on All Souls’ Day. Luz was glad for the change. The smell of marigolds from the neighbor’s yard still reminded her of the elders working the flowers, scattering the orange blooms over the graves while her cousins, impatient for their candy skulls, waited for the candles to go out. “I want my skulls!” they cried. But Luz tried to erase the memory as soon as it appeared. She felt as though she was bringing down some ill luck upon herself, a blight upon her future. She turned and inhaled great whiffs of the winey smell. Then the town seemed full of possibilities, containing rich secrets or the promise of a glorious future.

Somehow these promises seemed connected to Maria del Carmen. Luz, waiting for something to happen, felt as though she was in a perpetual fever. At last, one afternoon when the sun had left great trails of pink on the horizon, Maria del Carmen noticed Luz for the first time. A smile spread slowly from the full mouth. “Hi,” she said as she walked by. “Aren’t you Luz?” Luz felt the blood fan out from her heart and gather in her face. She looked down. “Hi,” she muttered.

Luz did not speak of her passion, but after that stuck to the steps until Maria del Carmen had passed. One day her teacher kept her at school; she was so late she didn’t put the supper on until Maria del Carmen had gone home. Elena muttered at the late meal, and her mother said, “Our Luz is spending too much time at the mirror.” Luz felt the blood come into her face and kept her eyes on her plate. She made amends by clapping tortillas even though the masa stuck under her nails like grit. They were always strange shapes and sometimes would not stick together. She flung them through the window and they sailed across the yard, accumulating under the dogwood like exotic mushrooms in progressive states of decay. On Saturday her mother, hanging out the wash, said only, “Perhaps, in the case of tortillas, the old way are not the best.”

One day while Luz waited on the steps, Maria del Carmen did not come by. The blackbirds gathered in the biggest tree, but Elena and her mother did not come home either. Then Luz noticed a fountain of smoke spurting into the sky and spreading like a nuclear blast, dark clouds emerging, engulfing others and being engulfed in their turn. She ran the blocks to the plant. The police were restraining the crowd on the track, but Luz edged forward until she saw the bodies on stretchers being loaded into ambulances. The workers were trying to punch their way through. At last Maria del Carmen appeared, her beautiful head with the loose bun at the nape above all the others.

“Thank God!” said Luz aloud. Then she searched for her mother and sister; at last their pinched, weary faces appeared around the railroad cars. Luz walked home between them, their arms draped across her shoulders. Even Elena could not eat the enchiladas Luz had in the oven, so her mother poured each of them a small glass of tequila.

Exhausted though she was, her mother could not sleep. “Manuel Flores,” she said. “A good man. But they say he will not live.” Luz could hear the flop of her thongs in the other room and pictured the feet, the left with two toes missing where the rats had chewed on her in the cradle. I won’t work in the factory, Luz thought. She saw the elegant feet of Maria del Carmen in their pale hose and wavered. I won’t even be a secretary. I’ll be a beauty operator in the Golden Scissors.

When Manuel died, their mother made the two girls go to the funeral parlor with her. At first Luz did not recognize Manuel in a suit better than the one he had owned when alive.

“He doesn’t look burned,” she whispered.

“Smoke inhalation,” muttered Elena. Luz saw her own hand creep over the edge of the casket. In spite of herself, she couldn’t help touching him. The face was cold and waxy, like plastic fruit in Winter.

That night Luz lay in bed between Elena and her mother, the snore from one and the whistle from the other chiming with the pounding of her heart. They could have died, she thought.

The next day after she had put the albondigas on to simmer, she lay down. Just as she was dozing off, she heard a chorus of children’s voices. “We want our skulls! We want our skulls!” She jumped off the sofa and went out into the yard, but there was no one there. At bedtime she was wide awake and listened all night to her thumping heart. After a week, her mother said, “Our little one is growing thin.” Luz tried desperately to stay awake in the afternoon, and sat out in the cold. The world dimmed, receded; a great pit of darkness welled up behind her eyes. A soft, deep voice broke through: “Luz, why are you sleeping on the steps?”

Luz opened her eyes to see the face of Maria del Carmen. The clear eyes, the glowing skin, the small hairs between the brows were vividly in front of her.

“Growing up is hard work,” said Maria del Carmen. She pulled her skirts forward and sat down beside Luz. “I remember. But you’ll get used to it. Things will be easier for you in a year or two.”

That night, her mother’s soft buttocks on one side and Elena’s bony hip on the other, Luz thought, what kind of world is this, where children starve? And good men burn to death. A moment later a worse thought followed. One day Maria del Carmen will die. Luz tried to imagine the ripe skin turned waxy, the mobile lips fixed in the false mouth of Hallowe’en. What kind of world was she growing up in, where the most beautiful woman in the world had to die? But then she thought, “If she can die, then dying must be all right. My mother will die. Elena will die. I will die. But not yet.” Flesh touching flesh, she listened to the breathing that filled the room as the dawn brought in the smell from the vineyards. 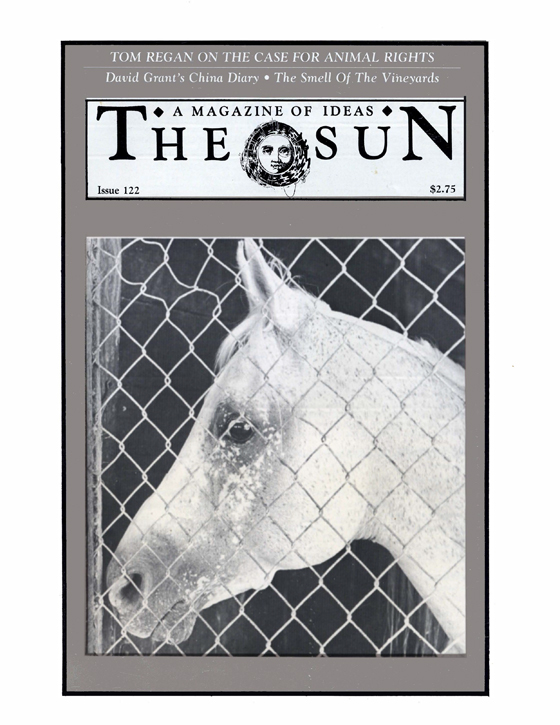