For Lee Hart, Standing By

This is for the women who have stood by their men, who have withstood separations and reunions, who have said repeatedly, Fine, it doesn’t matter, fine, I’m your little wifey, your honeybun your buttercup your little flower the little woman behind you all the way. This is for the women who love and support the unloveable, the unsupportable — when their men are swimming with Marilyn Monroe and dandling their secretaries across their laps. This is for the women who wait at home while their husbands drive off bridges and drown young women and wander in a daze mumbling, I wish this hadn’t happened. I wish I could just go to sleep and it would be over. I wish to God, pa, ma, it hadn’t happened. I wish I weren’t a man. I wish I weren’t in charge. I wish I hadn’t done that.

This is for the years of women who have stood by their men day after day, telling themselves, Things are going to get better, my lot will increase, we will prosper, we are prospering. It will be OK. Because he says it’s OK. Because I trust him. Because he is in charge. Because I have pledged my troth.

This is for the women, real and imagined — Sarah the Matriarch, Desdemona, Jane Welsh Carlyle — who were silenced or were silent. It is for those who imagine themselves and lose themselves in their husbands’ and lovers’ imaginings: what they ought to be, what they are not, who they could be, who they are not.

And, you may ask, What of Nora Astorga — the Nicaraguan spiderwoman, death woman, conniver — and others who stalked men and killed them or caused them to be killed, driven by politics or passion or paranoia, what of bloody vengeful Salome, Judith, Jael, Bloody Mary Tudor, Catherine de Medicis, what of Lizzie Borden and Mary Lamb who raised their hands against their own parents? . . .

This is not for those women.

But this is for all of us, all of the rest, all the others, at particular times, particular interstices, particular junctures and junctions, who have sighed or taken a deep breath and said, I’ll just wait it out.

For the women who are crouched in fear, who are afraid to come up for air, to raise their heads, who are afraid to lift their eyes above their husbands’. This is for those women, for them, for she, for you, for us, for we, for that part of myself, for that part of the population, that part of the gender, those who were burned in suttee when their husbands died, who are disgraced when their husbands are disgraced, who cling to something other than their own hand, who move to a rhythm other than their own breath, who are suspicious and trustful in the wrong amounts, at the wrong times, who are paralyzed to battle their fiercest enemy — self-doubt.

For these women, for ourselves — what should we give them? Pity? Pity to Lee Hart, who bore two separations from her husband in twenty-eight years, who stood silently by the fireplace, emerging from seclusion at the improbable-sounding place called Troublesome Gulch, defending her husband’s behavior on a boat called Monkey Business that crossed one island for another, crossed one border to borderless ocean. Nothing happened, he said, between himself and the model-actress who was born a year before Lee became Gary’s and Gary became Lee’s and they swore infinite fidelity before God and all mankind (womankind not yet recognized as a term). Nothing happened. I trust him. I will stand beside his fireplace stoking his fires quenching his fires fanning no flames, tending tending tending.

What would she do with pity? What does anyone do with pity? Accept it, absorb it into your skin like pain into a wound. Pity is not a balm. Pity has needles. Pity is not shared among equals. Pity comes from above. It hurts with a downward force like gravity.

Sympathy, should we pat her and soothe and cluck and gurgle and say, My sweet not-so-young thing, it is terrible, you know, we understand, it is awful, but this will pass. We are saying, You are soft and we will lend you insulation, rub you with creams and dust you with feathers of words. A nest.

Should we be angry, angry at Lee, at Joan and Jackie and Eleanor, for being dupes, for being stoics, for standing silently beside fireplaces, for turning their backs to the flame, for not looking the embers in the eye, for turning away, for turning to something else, some worthwhile endeavor, for turning? Angry at their weakness, their foolishness, their acceptance of themselves as dray horses, as back-up, as stage crew, art crew, prompter, makeup artist and costumer all in one? Angry at our mothers for taking it, day after day, at our grandmothers, for years of inherited deference? Anger at them for doing as they were told because — the reasons are obvious. The choice was obvious; there was no choice.

Anger at the system — shall we rail at it for taking Lee’s maiden name, Ludwig (her father’s name), so we know her as Gary’s wife, Mrs. Hart, “the bravest wife in the world,” Mrs. Gary Hart, Mrs. Lee Hart, daughter of — ? Shall we rail at the system because Lee Hart is not Geraldine Ferraro, she is not Ellie Smeal, she is not Jeane Kirkpatrick or even Elizabeth Dole. She is not Sen. Nancy Landon Kassebaum, born into politics. She also is not the immorally extravagant Mrs. Marcos, or the flirtatiously Western yet scholarly Mrs. Gorbachev. We didn’t know until now who she was. And now all we know is that she is not a twenty-nine-year-old Miami model-actress with streaks in her hair and a penchant for dangerous travel.

Should we rail at the system because Lee Hart is part Fawn Hall, part Pat Nixon — dupe, colluder, less than second-in-command — because she was not the Hart running for President?

Do we rail at ourselves? Do we see ourselves standing by a fireplace, preferring to play the fool to the shrew, preferring to bite our lip in the name of a higher cause, for a dishonorable man’s honor, for a vainglorious man’s ambition? Do we see her as sacrifice, as absorber of pain and humiliation, his bulwark, a woman who “continues to astonish” her husband with her “strength and courage?”

What do we give her, if not our pity, sympathy, anger? What does she ask for? She is not Lady Macbeth, urging her man to “screw your courage to the sticking-place,” to move ahead and slash whatever stands in his way. She is “my very strong wife close to tears,” says her husband, because of the roaring of helicopters, the glare of the cameras, the temerity of the press. What does she ask for, for herself? It is not in the papers. What must we give her? What must we give ourselves? An end to self-abnegation, self-mortification, self-sacrifice on the altar of another’s glory. We must give Lee Hart the same words we give ourselves, when we screw our courage to the sticking-place, when we dare to mine ourselves for our own visions of what we deserve and demand. For the meek demand nothing and inherit shame.

I had a few qualms about printing this, because it turns a human being into a symbol, and we don’t know who Lee Hart really is. But I agree with Sandi Wisenberg, who says her prose poem/commentary “will hold up after all the headlines have faded — because it’s about Lee Harts through history and Lee Harts in our midst.”

A former feature writer at the Miami Herald, Wisenberg teaches writing at The School of the Art Institute of Chicago and Northwestern University. 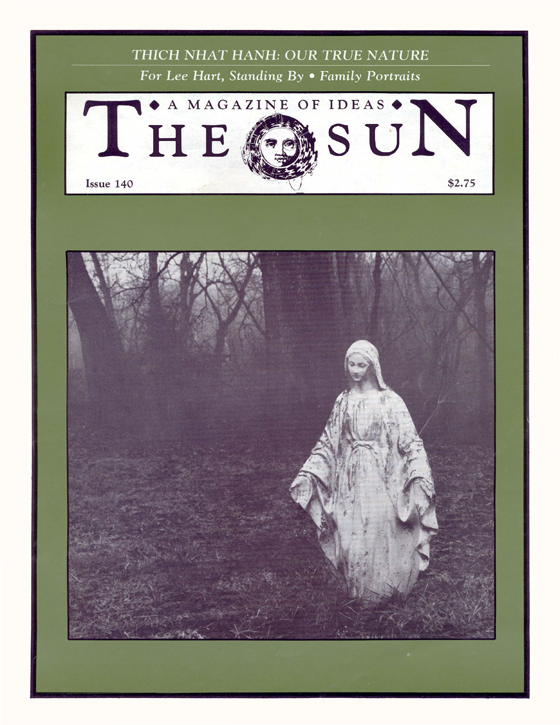