Later she would explain it was the only way to stop my screaming, that even in sleep I attacked the peace of the house with cries that were piercing and relentless. She would explain this in passing, as one might explain to a child the turn of seasons or the reason the stars shine at night — a little fable as much for her own amusement as my own, a laugh she would allow herself. She would explain this while drying the dishes, sighing at the throttled child beside her, not knowing that for years I would believe in the memory of a white gown, her resolution.

I began to search the house for what had been taken from me. I did not know its shape or dimensions, but I was sure I would recognize it as my own. A voice box — it would be something precious, under lock and key; it would be like finding a lost doll, or a brother you never knew you had.

Even as I searched, my silence alarmed no one. People remarked on how well-behaved I was, how quiet, how shy, how enigmatic. The adult world welcomed me and repeated with satisfaction — a nod of approval to my mother — that a child should be seen and not heard. Only I could see in my mother’s politely triumphant smile a spasm conveying guilt and hopelessness and unbearable defeat in the face of what would be denied me.

To my father she acknowledged nothing. Yet in his own eyes, as he took me on his knee, he betrayed an agony of sorrow and failure such as could be present only in an accomplice. He would keep me near him to expound upon the mechanism of an old compass he kept in his pocket, the beauty of the Brandenburg concertos or a certain line of poetry, bits of geography and anatomy and solid geometry remembered from schoolbook texts, and finally the secrets of his boyhood and the inexplicable fluctuations of his love, and on and on as he discovered that my patience was as vast as my silence.

In time I searched less desperately. I was the perfect traveler, for a silent intruder is no intruder at all. I learned to use my silence, to mold it into a thousand shapes so that I might please, or be pitied. Yet it seemed my silence was beginning to lose its charm.

“How long can this go on?” my father sighed one night into the television’s blue light. My mother remained a mute presence beside him, and from then on she was not much more talkative than I was. “How long?” he asked the next night, and the next, his eyes fixed upon that wondrous box of light that could do what I could not. The television remained always on. Its chatterings filled the house in place of a child’s laughter.

My father continued to inquire. Each time, my mother’s silence hardened. It took on a perceivable hue, inferior to the density of my own, yet equally inscrutable. Still, our silences differed. My mother’s was a wall, a closed door of impenetrable glass thickening about her. Mine was a window, a pillar of cool air that drew people toward me.

The trips began, endless visits to an endless array of doctors who would knock and tap and poke and peer and shake their heads. With my obedience, I tried to assure my mother that I understood our code of silence. Soon her hand no longer trembled when the doctors lit the narrow passage of my throat; that hand which I thought the instrument of my undoing no longer raged against itself. It found a clear repose that resembled, more than anything, a disembodied death; the wrist, the arm, the rest of the body had no more claim upon that hand.

I don’t know when the decision is made to give up, to adjust oneself to things as they are, but gradually I was left to my own devices. I was given magic slate boards on which to make requests. I wore them out slowly; in the hush of my world, I was self-contained.

I wanted my mother to know that I forgave her. I stopped looking, and brought new sounds into the house — music I made by brushing twigs together, or rattling pots and pans. I spread fallen leaves across the floor for people to crunch.

There was a time when my father did not come back from wherever it was he went during the day. My mother never wore the look of one who was waiting. She went on, as if he had never been there. Sometimes she would talk to me, but not with my father’s hungry solicitude. She spoke lightly; her voice made me think of butterfly wings. At times I would hear her in the next room, speaking into the air with that same fluttering voice.

Already I am planning how I will welcome him, with what words. I imagine that if a caterpillar can turn itself into a thing of great beauty, there is no reason why I cannot bring to life my voice. I wonder if I will recognize the sound, if the unaccustomed effort will hurt me. Before bed I gargle with warm, salty water. I form words tentatively, curling my lips into shapely oohs and aahs. Sometimes I think that I will not even wait for his arrival, that I will do it now, for practice, that I will walk downstairs and tap my mother’s shoulder and lean into the warmth of her quietude with sounds all my own, new and urgent, a deep sobbing that only she can comfort. 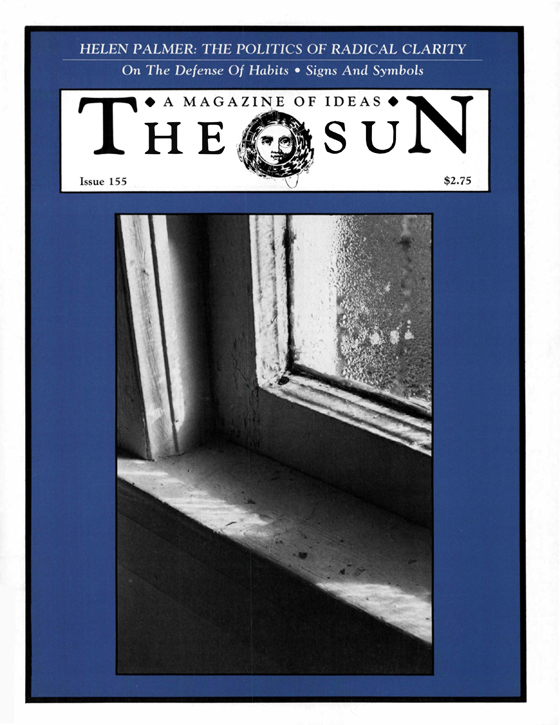 On The Defense Of Habits