The world is before you and you need not take it or leave it as it was when you came in.

Idealism increases in direct proportion to one’s distance from the problem.

Feeling that he must run and that he will take root forever and stand, does both at once, and neither, grows blind, and then sees everything, steps and becomes a man of stars instead.

One can fool life for a long time, but in the end it always makes us what we were intended to be.

All human life has its seasons, and no one’s personal chaos can be permanent: winter, after all, does not last forever, does it? There is summer, too, and spring, though sometimes when branches stay dark and the earth cracks with ice, one thinks they will never come, that spring, that summer, but they do, and always.

I was twenty when I went in, thirty-one when I come out. You don’t count months and years — you don’t do time that way. You gotta forget time; you gotta not give a fuck if you live or die. You gotta get to where nothin’ means nothin’.

It takes a long time to understand nothing.

Apart from the known and unknown, what else is there?

It is told that Buddha, going out to look on life, was greatly daunted by death. “They all eat one another!” he cried, and called it evil. This process I examined, changed the verb, and said, “They all feed one another,” and called it good.

Until God has taken possession of him, no human being can have faith, but only simple belief; and it hardly matters whether or not he has such a belief, because he will arrive at faith equally well through disbelief.

None of us has lived up to the teachings of Christ.

There is no such way to attain to a greater measure of grace as for a man to live up to the little grace he has.

By the time I was three, I was spending every waking moment at the keyboard, standing, placing my hands on the keyboard, and pushing notes. And I would choose very carefully what tones I would play because I knew that when I would play a note I would become that note.

Usually I like your choice of cover photographs. But I am really mystified by Issue 193. Why does the backside of a zebra merit the cover?

Then I read Sunbeams. Is no one editing these quotations? Why mix something as hopelessly mundane as the quotation by Martin Mull — “Always pee before a long car trip” — with the quotation by Kabir and the Bauls verse? Truly, life is composed of the banal and the sublime; but must I find them side by side in The Sun?

Katherine Alexander Downers Grove, Illinois
More Letters
Thank You Your donations helped to keep our ad-free, nonprofit magazine in circulation last year, funding everything from production to distribution. Learn how you made a difference last year. Learn More 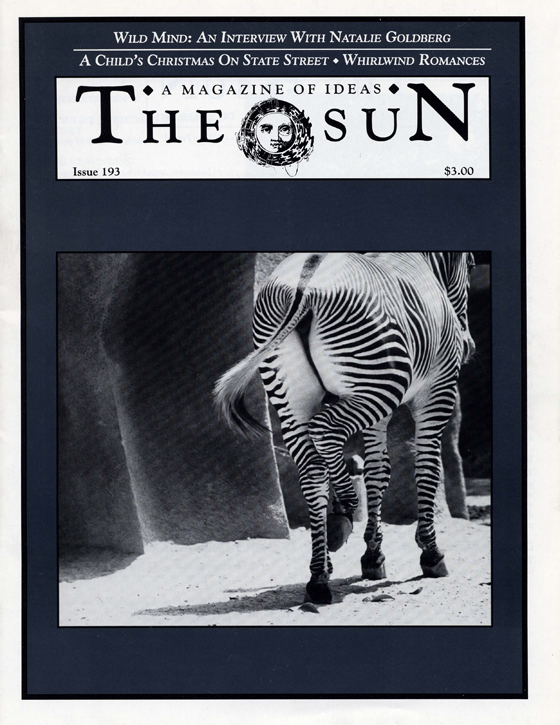 When You Get To A Fork In The Road, You Take It

By David Romtvedt
The Sun Interview

An Interview With Natalie Goldberg