They say it takes at least a million dollars to start a magazine. They say you’ve got to identify your audience in advance, and find advertisers who want that audience.

I’m glad I didn’t know that in 1974. I was living rent-free in a garage, working odd jobs, determined not to return to my former incarnation as a big-city newspaper reporter. I started The Sun that year with fifty dollars borrowed from a friend. I typed the first issue on my old college typewriter, a Remington manual with — I’m not making this up — Miracle Margins. Having no idea who my audience was, I tried to sell the magazine on the street, but after five minutes I was so embarrassed I almost gave up. Fortunately, an old acquaintance walked by just then. He threw one arm around my shoulder and, waving his other arm expansively, encouraged me to persevere. I believe he’d been drinking — he usually was in those days — but his enthusiasm was a godsend. Here’s to you, Henry.

I persevered. Yet for years, no matter how hard I worked, the pile of unpaid bills grew larger. No matter how much The Sun improved, there was no way I could pay writers. I’d thank them. I’d praise and encourage them. I’d fall in love with them. But a check was out of the question.

Today, The Sun manages not only to pay its bills on time but also to pay writers. If our payment scale is modest compared to that of many larger magazines, at least the checks go further than a handshake.

Still, it’s often difficult to put a dollar value on a writer’s work. What’s the value of an essay that’s short and unsentimental — no big, gas-guzzling sentences about God and Truth — but that takes me somewhere real, somewhere holy? What’s the value of a story that reminds me I’m utterly alone yet never truly alone? Maybe, when I started reading the story, I was a locked door; that story was the key. How much is it worth when the door swings open?

I’m aware that a story it took only fifteen minutes to read may have taken a week or a month or a year to write. The story got written because, day after day, someone was willing to juggle the demands of job and family, to get up early or stay up late, to push away sleep, to push away from the table or the television. Because of the writing. Always the writing. Yet the fact is that most writers don’t earn even minimum wage for the hours they put in. Though they’re grateful for a check from The Sun, the money is almost never commensurate with the effort that went into a piece — not when each sentence is distilled from so much unglamorous hard work, all that writing and rewriting we delicately refer to as art. (When Ernest Hemingway was asked how much rewriting he did, he said, “It depends. I rewrote the ending to A Farewell to Arms, the last page of it, thirty-nine times before I was satisfied with it.” The interviewer asked, “Was there some technical problem there? What was it that stumped you?” Hemingway said, “Getting the words right.”)

History will judge whether any of The Sun’s writers will rank up there with Hemingway. But down here, where history is still being made, I’d like to err on the side of generosity. I’d like to pay writers more.

If you think The Sun’s writers make a meaningful difference in your life, if they’ve opened any of your locked doors, please consider becoming a Friend of The Sun with a tax-deductible donation. Your yearly or quarterly pledge would mean a great deal to us. We could use the extra money to pay writers more without compromising our ability to pay other bills: throwing caution to the wind may have been a prerequisite for starting this magazine, but it’s no way to run one. Although The Sun is something of a success story in the world of small-press publishing, I know better than to take our good fortune for granted — not in the face of increasing postal costs and rising paper prices and the uncertainties that confront any nonprofit organization. Though we continue to economize however we can, the truth is that, without advertising, we depend on our readers more than most magazines.

And many of our readers also depend on us. As Art Kleiner has written, “Magazines are too little acknowledged for their effect on the North American culture. Just by existing, a great magazine defines a community of people with a common language of thought, and propels those people into a common experience.”

It’s not for me to say whether The Sun is a great magazine. (I try to remember Mother Teresa’s observation that we can’t do great things; we can only do small things with great love.) But I do know that the type of intimate conversation between reader and writer that occurs in The Sun is rare; that something miraculous happens in the margins month after month. And I know that the miracle begins in a room, where a writer sits alone, struggling to say something, and to say it well.

I still praise our writers. I still fall in love. It doesn’t matter that I’ve never met many of them and probably never will. What I love is the angle of their vision, their passion, their honesty. By inviting us into their lives, they help us make a place for ourselves in our own lives. 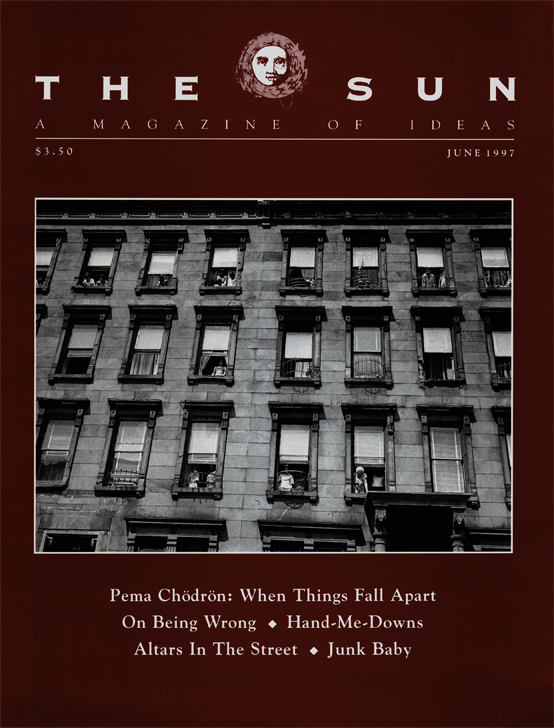