A Reconsideration Of The Good Death Of Scott Nearing

Ellen LaConte’s essay reconfirmed my feeling that Helen and Scott Nearing didn’t always tell the whole story about their self-sufficient lifestyle — though what they did tell was exciting, useful, and inspiring, and led the way for many of us.

I once visited the Nearings and witnessed firsthand some of the things they left unsaid. For instance, they often talked of their gardens, which produced greens, salads, roots, and berries in abundance, but they never mentioned the vast tubs of peanut butter and bulk bags of grain they purchased from a food co-op. They also never mentioned dairy products, but when I was there they had cottage cheese at every meal. I wondered how they bought these things — not to mention stones and mortar for almost a dozen buildings — on the money from sales of books, berries, and syrup. Obviously, the Nearings were not poor.

All of this is OK; they just should have told people. Some of us got led down the primrose path, thinking all you have to do is get some land, build a little house, grow some food, cut some wood, raise your kids, and all will be peaches and cream. It doesn’t work that way — at least, it didn’t for me.

Another thing Scott and Helen never fully addressed was the issue of children, especially teenagers, and the Good Life. Scott said make them do it. Helen avoided the subject. They didn’t have teenage kids while in Vermont or Maine. I did, and kids and the Good Life often did not mix. My partner and I ended up putting the Good Life on the back burner until the kids were out on their own.

I have learned to glean from the Nearings’ writings what applies to me, and to make my own Good Life. It’s not easy, but it can be done, and I am grateful to Helen and Scott for their example, and for the recipe Helen gave me for “applicious”: applesauce, a few apples, dates, bananas, and peanut butter run through a blender and served with a little wheat germ; good any time, but particularly on winter-solstice morning.

Having been the Nearings’ neighbor since 1969, I feel compelled to comment on Ellen LaConte’s revised version of Scott Nearing’s death.

I and my former wife worked closely with the Nearings for a number of years, using our backs, getting the paperwork caught up, and helping to organize and keep busy the droves of people who came to work with them. We commonly had a four-to-ten person crew at work making the Good Life what it became. The myth LaConte refers to was begun, even then.

I have known Nancy Berkowitz since she first moved to Maine as a young woman. She was a constant and loving contributor to Helen and Scott’s life, as well as to their myth. She is not the first whose work and devotion went unacknowledged by Helen, but she arguably gave more of herself than anyone else. Like the rest of us, she loved them anyhow. That the Nearings claimed the work of many hands for their own does not cancel out the good they did. They affected a great many lives for the better.

Helen and Scott are gone. Writing revisions to the story of Scott’s death serves no purpose. By writing of lies and myths at this time, LaConte has gone well over the line of propriety. Has she no shame? She knew the truth when they were alive, and denying it then has brought her much. (LaConte inherited a large part of Helen’s assets at her death.) She should let them rest in peace.

In 1985, when Helen and I began to talk about my being her biographer, I had little idea how complex and problematic the assignment would prove to be. I announced (fairly self-righteously, it seems to me now) that I would, of course, need to tell the truth about her life as I understood it. Helen assumed that I would tell the truth, which is one reason she asked me to wait until after she was gone. In the meantime, she helped me make a list of the necessary corrections to the record. It seemed to relieve her to ’fess up. I hadn’t guessed until then the degree of disparity between the public Good Life and the profoundly exemplary but very human life Helen and Scott lived privately. Nor had I realized the degree to which that disparity — and the challenge it presented to Scott’s beloved Truth and to her own spiritual aspirations — pained Helen.

Greene has got the dates right. In 1993, not long after I suggested to Helen that Nearing scholars would have a field day with The American Super-Race, the book mysteriously “disappeared” from her library. (Into the fire?) Though Scott was not inclined toward apology, he did openly rue his strained relationships with his family and, in his autobiography, The Making of a Radical, admitted to doubts about socialism as it had thus far been practiced. For the record, he had been separated from Nellie Seeds Nearing for a number of years before Helen came on the scene.

Heavrin seems to have missed my statement of purpose in the essay itself. It was never in the Nearing or Knothe makeup to let things “rest in peace,” especially not where getting at the truth was concerned.

As one of Helen’s several intimates and heirs, I wrestle daily with my responsibility to her, to her memory, and to her public. I’m torn between the urge to leave well enough alone and the desire to make well enough even better. I must determine whether and how to reveal what was hidden while preserving and enhancing all the good she and Scott did, even as Heavrin and his neighbors and fellow members of the Good Life Center struggle to determine what to change and what to preserve at Forest Farm, the manifest legacy of the Nearings’ lifework. In this, I take a cue from Scott: “The genius is not the man who makes no mistakes, but he who visualizes the right way and keeps on until he finds it.” (I’ll assume he used man out of habit.)

I’d like to correct a few minor errors in the introduction to Ellen LaConte’s wonderful demythologizing of Scott Nearing’s death [“Like a Leaf in Autumn,” August 1998].

Scott and Helen Nearing did not stay in their Vermont homestead for thirty years; they arrived in 1932 and left in 1951 or ’52 for Forest Farm, Maine.

At the time of their arrival in Vermont, Helen was Scott’s beloved partner, but to call her his “wife-to-be” skirts another issue: Scott had left his wife and family for Helen, but his first wife, Nellie Seeds, would not grant him a divorce; Helen and Scott were married after her death in 1947.

I bring these matters up because the point of LaConte’s article is accuracy of recollection and the danger of editing the past. I have admired the Nearings’ homesteading example for many years and followed it when I could, but Scott and Helen’s life together was full of contradictions, and their notion of truth was pretty loose. Their inconsistencies were often trivial, such as proclaiming strict vegetarianism while using dairy products, or resolutely opposing the keeping of domestic animals while they had cats wandering about, or urging everyone to stay home and tend to their own business while they globe-trotted six months out of the year.

But sometimes Scott was inconsistent on matters of utmost importance: It is hard to reconcile his pacifism with his public endorsement of Stalin’s executing four thousand Polish officers in the Katyn Forest as “a social service,” or his embrace of the Jeffersonian right of rebellion with his applause for Russia’s crushing of the 1956 Hungarian uprising. For a real chill, one can look at his 1912 book The American Super-Race, endorsing the eugenic sterilization and elimination of genetically defective “scum” in the interest of building a super species destined for world mastery. He ceased this campaign after he learned how genetics really work, but he never recanted or apologized for the book, or for the ideas in it. Indeed, as far as I have been able to determine, he never publicly changed his mind about anything he did or said.

In spite of all this, I admire Scott and Helen for their resolution, hard work, pacifism, anticapitalism, vegetarianism, individualism, humanism, crankiness, compassion for our animal brethren, and promotion of organic gardening.

Mott Greene Seattle, Washington
More Letters
Thank You Your donations helped to keep our ad-free, nonprofit magazine in circulation last year, funding everything from production to distribution. Learn how you made a difference last year. Learn More 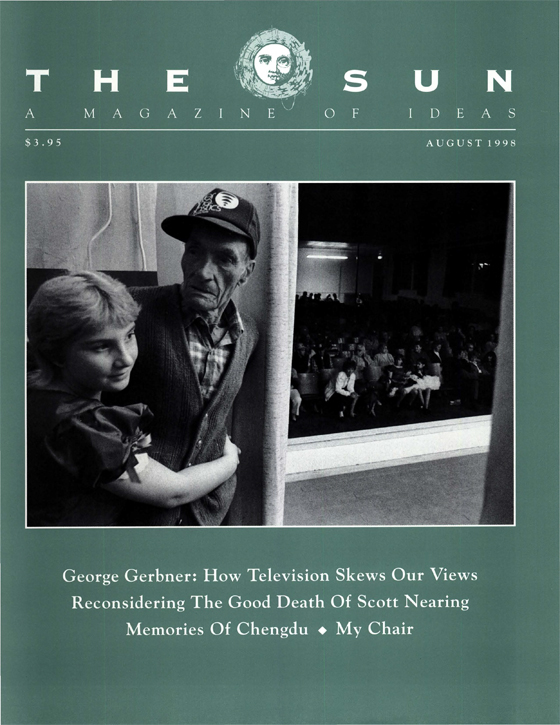 They Leave You Here Alone In The Dark