Foreign agricultural trade statistics for fiscal year 1977, just released by the U.S. Department of Agriculture, reveal some startling and potentially dangerous developments for America’s embattled family farmers. Production of food for our own dinner plates is being transferred rapidly to foreign lands.

The American farmer has lost control over American agriculture.

The U.S. receives more than 70% of its food imports from Third World nations. For years it was generally believed that these imports consisted of items not grown here — coffee, tea, cocoa, bananas, and so on. Again some startling news from the U.S.D.A.: over the last ten years, between 49% and 70% of all imports have been of food items which are being grown by U.S. farmers. The U.S.D.A. calls these imports “supplementary.” In other words, the bulk of our import trade crosses the border in direct competition with our farmers. Since 1967, the quantity of these “supplementary” imports has risen 63%. The quantity of food imports not produced by U.S. farmers (such as bananas, cocoa, tea) rose only 7%.

Large multinational corporations are behind the shift in agricultural production to countries like Mexico. Those corporations directly involved in farming are simply moving south of the border. Others are revamping their supply and distribution networks to take advantage of and encourage the importing of food from countries where land and labor are cheap. Meanwhile, domestic markets for U.S. farmers dry up. This tends to push the farmers towards specializing in the one or two crops for which a market still remains in their locality. Truck farmers and others practicing diversified agriculture find their operations increasingly threatened by the “Mexican connection.” Small family farmers, tenant farmers and sharecroppers are even more vulnerable to the loss of markets.

The American farmer has lost control over American agriculture. A tight group of food processors (two-tenths of 1% of the food manufacturers control more than one half of the industry assets) and a handful of national supermarket chains effectively keep the lid on farm prices while farm machinery and chemical corporations raise their prices with casual abandon. Hundreds and sometimes thousands of farmers thus find themselves squeezed out of business every week, a monument to their own powerlessness.

The farmers’ alternative is to go into debt. Farm debt has more than doubled since 1971. And now the U.S.D.A. reports that twice the normal number of farmers are being refused loans by commercial sources.

It is easy to see how a Continental Bank executive could assert recently that “the control of agriculture is moving to those who control capital.” Big banks are in the drivers’ seat in our modern corporate economy. The New York Times recently headlined a story, “Stock Voting Power Found Concentrated in a Few Investors.” The article reported on a study of 122 leading U.S. corporations by a U.S. Senate subcommittee. It found that Morgan Guaranty Trust, for example, is among the top five stockvoters in 56 of these corporations and the biggest stockvoter in 27. Who controls the banks? According to the report, “The principal stockvoters in major banks are other large banks. Morgan is the principal voter of stock in five of the nation’s ten largest banks, and, in turn, the top four stock voters of J.P. Morgan and Co., Morgan’s parent holding company, are other leading New York banks.”

These same banks hold many Third World nations over a barrel. Third World debt is now probably more than $200 billion — twice as large as in 1974. In order to repay the debt (or acquire more capital) many countries are forced to promote agricultural exports. It is the only way they have of making money.

Production of food in the Third World destined for the export market is often controlled by the local aristocracy or by foreign corporations. This has often meant that the best land in these poor countries has shifted from producing for local (often hungry) people to producing for the international market. The fact that 77% of the arable land in the Barbados is used to grow sugar cane (a crop grown in Florida, Louisiana and Texas) for export goes a long way towards explaining why so many people there are hungry.

This situation came to a head in northwestern Mexico in 1976 when peasants rebelled and even occupied the land of estates that were producing food for export to the U.S. rather than food for Mexicans. The peasants were demanding that laws already on the books giving them rights to the land be enforced. They were brutally suppressed. Today, increased imports from this very productive export-oriented farming region of Mexico depend on the maintenance of an unjust and illegal system of land use and land ownership. This system is made possible and supported by the U.S. corporations that import this food.

Even the American consumer fails to benefit from the shift in agricultural production to foreign countries. The money saved by corporations from producing food on cheap foreign lands, with cheap labor, and with pesticides banned for use in this country, is not passed along to the consumer. It simply serves to increase the profits of the corporations. This, at least, was the conclusion reached by the Federal Trade Commission in its study of the effects of the nearly total transfer of pineapple production from Hawaii to the Philippines and Thailand. The FTC reported that the decreased cost of production did not result in lower prices for the consumer.

The quality of many foods imported is also lower than domestic produce. Studies have shown that the nutritive content of many vegetables begins to deteriorate within hours of picking. Vegetables picked in South America, Asia, or even Africa could scarcely be of the same quality as those grown locally.

In Tennessee and Alabama, farmers organized by the Agricultural Marketing Project have set up direct farmer-to-consumer markets in some 30 cities. A cost/benefit analysis showed fresh produce being offered to consumers for as little as one half the supermarket price with the farmers pocketing 20% more profit even at these low prices. Compare the cost, the nutritional qualities and the taste of the vegetables in these farmers’ markets with their imported counterparts and it is easy to see that consumers’ interests would not be served by increased agricultural imports — especially if they drove the local family farmers out of business!

The central issue in agriculture today is the issue of control. The banks and corporations have it. Control over the domestic market makes possible rising consumer food costs (and declining quality) in the midst of stagnating farm prices. Control over foreign land and labor allows poor people to starve while food is grown for export. Control, as we have seen, has slipped from local farmers, wholesalers, processors and retailers to the large multinational corporations.

Five privately-owned corporations now literally control world trade in grain. This kind of consolidation of corporate power teamed with inadequate markets for domestically produced food and sagging prices raises an interesting question for the future. Is the U.S. being turned into a “banana republic”? As production of many fruits and vegetables is transferred abroad many farmers are being forced to specialize in grains, the market for which is tightly controlled by these five corporations. Will this not eventually cause even more farmers to be driven off the land?

Far from being enemies, farmers, consumers, working people and people in underdeveloped countries are natural allies. All lack control over the food system and all are being hurt in their own ways by it. In the face of this, any differences we may have among us are either artificial or tiny indeed. This lack of control — a situation shared by all except corporate and government interests — should serve as a basis for uniting us. Our common aim should be to regain control over our own destinies and the food system and reinsert more humane and sane values, like justice, into that system. 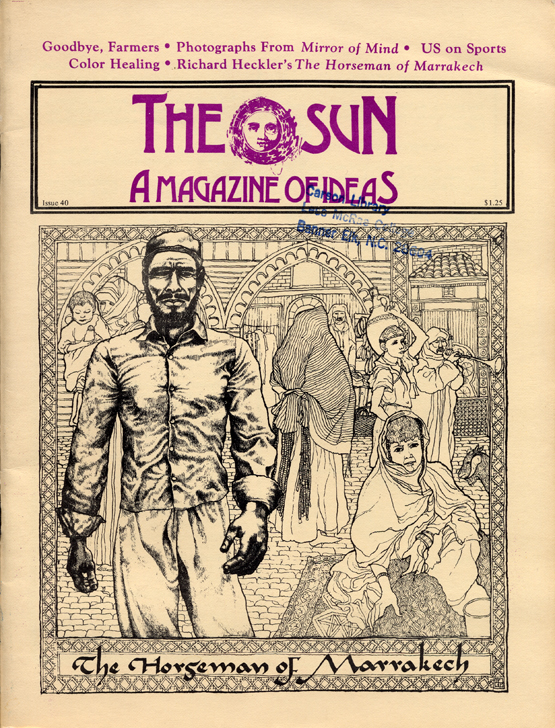 Pity: A Lesson In Self-Discovery