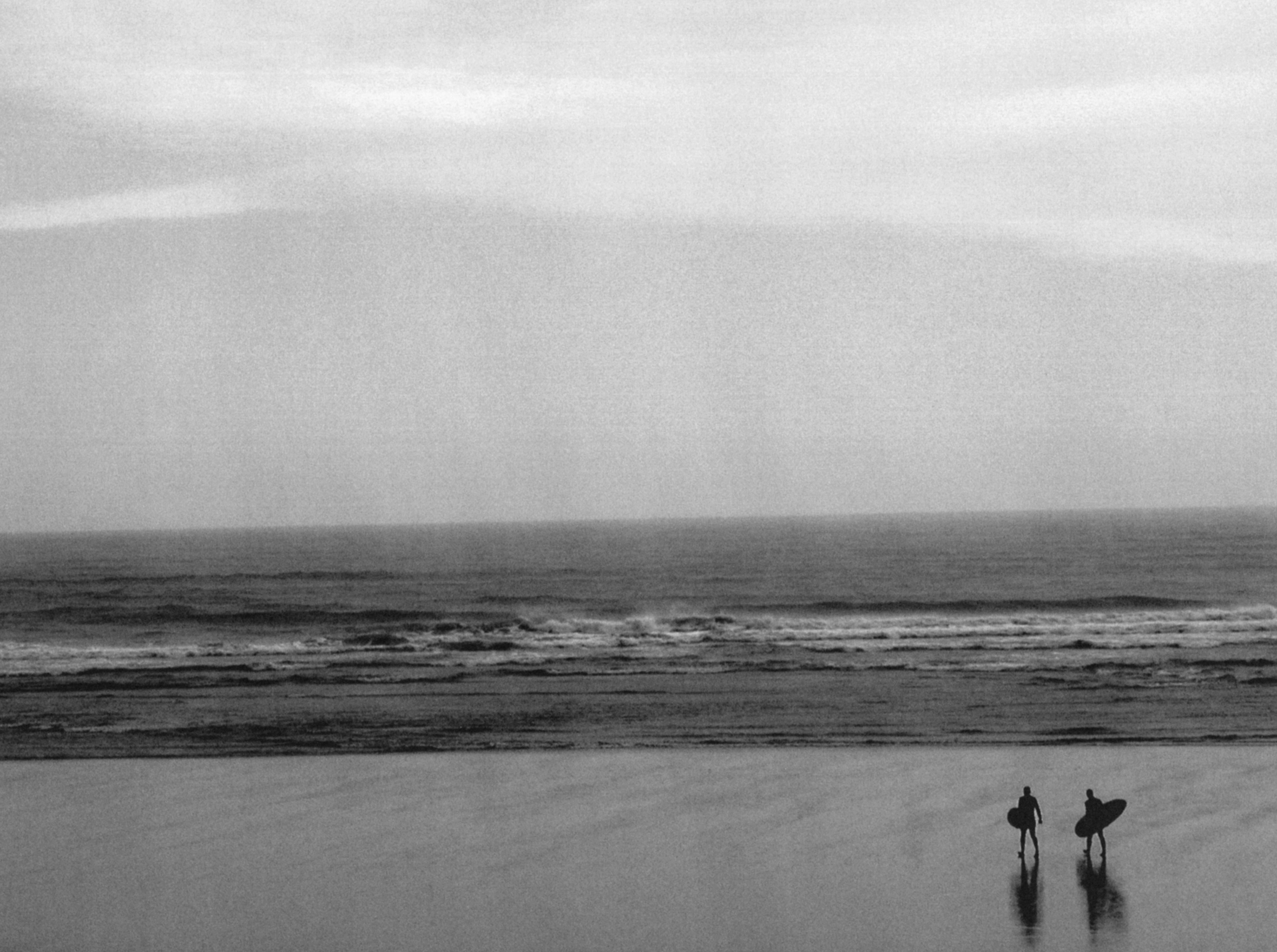 One sunny day a large man in faded red shorts with skin as brown as a coconut picked me up by the waist and settled me on a bright-yellow surfboard. He spoke a few words to me in pidgin English (which I didn’t yet understand), patted me on the butt, and pushed me into one of the gentle waves that rolled onto Queen’s Beach in Honolulu, Hawaii. “Go, Bruddah, go!” he called as I stood, my arms spread wide, my feet finding traction on the waxed board. I glided gracefully toward the white sand. Then my shorts fell down, and I fell off the board.

I was nine years old, strawberry blond, and freckled. The big Hawaiian dove to retrieve my shorts and swam over to help me put them on. He laughed as he helped me back onto the board.

He swam beside me as I paddled out, my arms clawing at the ocean’s surface. With his help I crested each sparkling swell, determined to succeed this time. Then I turned and was suddenly riding another wave, surrounded by other surfers on a shimmering sea.

From that moment on, I was a Hawaiian.

Before I became a Hawaiian, I was a child in Del Mar, California, growing up close to the racetrack and the ocean. My dad would bring my two siblings and me with him to the races, and when he’d take us for walks on the beach, he would draw the track in the sand and use it to tell the story of his latest win.

The walks we took with our mother followed a different path, along the cliff above the water. She’d stop, take my hand, and stare silently at the horizon. I’d do the same, imitating her expression of wonder.

One night at dinner my mother announced there would be no more talk of furlongs and ponies in our house. A month later we kids packed our suitcases and straw hats and flew with Mom and Dad on a plane bound for the Hawaiian Islands. My father had found a job there with the federal government as a house appraiser.

We lived in a hotel in the Honolulu neighborhood of Waikiki while my father worked and saved to buy a house. At the start of the 1960s Waikiki was a smaller, friendlier place than you’ll find these days. Hawaii had been a state for only two years. I remember the scores of construction cranes groaning, turning, and dipping, raising the new hotels. I remember a beautiful teal sky one evening after a nuclear test on distant Christmas Island. And I remember standing on a bright-yellow surfboard at Queen’s Beach at sunset, becoming a Hawaiian.

I would never be a true Hawaiian, of course. But, Lord, how I tried. I ate poi, learned to speak pidgin, and threw myself into the sea and the sun. A flock of us kids from the neighborhood would hit the beach whenever we could. We’d walk to Kaimuki to catch the bus. We’d buy packets of dried cuttlefish and mochi crunch from the Japanese market, then stand at the bus stop listening to the elderly women chatter beneath their paper parasols printed with red hibiscus flowers. We’d see the young couples shopping for wedding dresses in the Filipino dressmaker’s shop, the dark-skinned mannequins all dressed in white, and we’d laugh and consider ourselves lucky not to have girlfriends. Then we’d hop on the bus with our flowered shorts and our quarters for the fare, off to Makapu’u Beach on the windward side of the island, to spend the day in the water. Sometimes an older brother with a car would let us put our beat-up boards on his rack and take us wherever he was heading: Ala Moana, Mākaha. We were a diverse group: Hawaiian, Chinese, Japanese, and one little haole boy — me.

I learned quickly that haole (pronounced HOW-lee) meant “Caucasian.” We all had nicknames. The Hawaiians were kanakas. The Chinese were pākēs. I was a haole. The sound of the word could make me feel warm and welcome, or make me shudder. When attached to boy, haole had a gentle nature, as in “Little haole boy, when the wave is coming, put your foot on the board here,” or “Haole boy, bring your uncle one beer, please.”

Calling someone just haole was rougher and carried with it the history of the white race plundering the islands, and of Hawaiian culture disappearing. If I was paddling my surfboard and a wave formed, a friendly Hawaiian might call to me, “Hey, haole boy, my wave!” If I took his wave, I would hear, “Fucking haole!”

When I heard that, I would silently move to another part of the beach to study the coral heads or the smoke of the burning sugar cane that covered the Waianae Mountains like a shroud.

I would come home from those long days in the water fried by the sun. But, brother, I wanted to fry, because then I’d be that much closer to becoming a true Hawaiian.

My dermatologists ask me now: “Didn’t you use sunscreen?” Like some Hawaiian would have paddled over to offer me some Coppertone instead of shouting, “Hey, haole boy, my wave!”

These days I walk along the white sand and pull the dead skin from my arms and shoulders. I hold these gossamer fragments of myself up against the setting sun and let the light shine through them. All my Hawaiian surfing buddies had Polynesian bloodlines. Seafaring was deep in their DNA. Their double helixes were curled and curved by the wind and the sun and the sea. They got browner; I got skin cancer.

I’ve had it carved away, and I’ve been sewn up. I receive treatments under hot lights and then, baked to a candy-apple red, have to stay inside for five days or more, looking longingly out my window at the water and sand.

I walk on and pull from myself a bit more parchment, a record of my long-ago attempt to become a Hawaiian. I am shimmying out of my skin.

When I was a boy, all I ever wanted was to lose this white skin and disappear into the crowd. All youths want to belong. We buy the shoes the happening kids wear, try to walk like them, carry our books crooked in one arm the way they do. Acts of assimilation, of disappearance.

My plan to change my skin was a dismal failure. Once, in high school, my feet got so sunburned I had to wear flip-flops to class, which wasn’t allowed. At one point I had to slap-slap my way to the blackboard to solve a problem. The other kids stared at my feet in disbelief.

A big Hawaiian boy named Alvin in the front row — his feet, like everyone else’s, forced into leather shoes they never otherwise wore — raised his hand. “Teacher, how come he gets to wear his slippas to school and we don’t?” (Hawaiians call flip-flops “slippas.”)

My face was as red as my feet as I slapped my way back to my seat. Haole boy. I wanted to run out the door, down the hall, and off the campus. I wanted to hide in the sea.

How I loved the ocean. In it I could feel like the Hawaiian I wanted to be. I’d sit on my board and watch the clouds gather on the horizon and see the humpback whales like distant islands. Or I’d slide off my board and sink into the blue and watch the turtles swimming by or go nose to nose with the curious fish. On land I wanted to disappear a good part of the time, but in the sea I could be with other odd-looking creatures, happy in the water’s vastness. Like a white feather on a blue canvas, I rode the crests, lulled in the troughs, and flailed in the breaking foam, all while the sun beat down like a hammer.

I’m still skinny and white, and I still paddle out into the ocean to catch a wave or two, like some elderly sea turtle.

We all have to borrow in life. We borrow money to buy a home or to travel. We borrow from our independence and our spirit to make a living. I borrowed from my health to try to become Hawaiian. And somewhere a ledger is tallied.

I’ve had at least ten surgeries: they cut a piece from you, send it to the lab, check the margins, cut you again, then zip you up once more. I’ve had the light treatments: sit before a ray gun disguised as an innocent lamp, and the next day your face falls off. I’ve hidden inside for a week, walking in circles around my apartment, checking the mirror every now and then to see if I’m still a monster. When I go out, I sneak down the street with my peelings and bandages, feeling as if the whole world were eyeing me, as if I were back in that classroom with my sunburned feet and my slippers.

As the years roll on, we lose prostates, breasts, and memories to life’s slow winnowing. We lose skin — the thin and freckled vellum on which is written the story of our lives. Yet with each payment against what I’ve borrowed, I also feel a lightening, a slimming. Bit by bit the burden of my debt is lifted. I am no longer that boy who wanted to disappear into the group, but a man on the path to another, bright disappearance.

Stars And Moons And Comets