“One Nation, Indivisible” features excerpts from The Sun’s archives that speak to the current political moment by giving readers perspective on the past and determination to face the future.

This idea that we can’t talk about regulating capitalism because it would be a form of socialism has a profound silencing effect, and it’s going to take us quite a while to convince average Americans of the difference between Stalin and single-payer healthcare.

“The cop said they found him sitting at the bus stop in front of the hospital,” Cat-Eyes told me. He said the man’s name was Wilbur, and that he didn’t talk much. He put a hand under the old man’s elbow to steady him. Wilbur swayed a little, then fell back into Cat-Eyes’s arms.

Wilbur spent the night on the floor of the office, bundled in a worn mattress pad and my mother’s parka. He seemed too frail to be left in the hallway with the other latecomers, who were restless with drink or delusion and hadn’t wanted to come inside at all. I sat in the desk chair after lights-out, listening to him breathe. It seemed possible that, at some point in the night, his breathing would stop. The papers he’d been carrying were prescriptions and discharge orders, and the bloody bandage covered the hole where he’d had a feeding tube until just that morning. A tumor the size of a loaf of bread caused his belly to hang over his belt. Stomach cancer, he’d told me during the intake process. “I probably won’t live till spring,” he’d added, as if it were just another piece of information for the form. “But the Medicaid card only pays for so many days in the hospital, and I guess my days ran out this morning.” He smiled, then turned his hands up in a gesture of helplessness.

My husband was raised in a mud hut on the coast of Libya, where families collected water from a common well and filtered it through empty flour sacks before giving it to their children to drink. By the time he was a teenager, the sound of his mother wailing in labor was as familiar to him as her haunting moans of grief. She gave birth to thirteen children, five of whom did not survive early childhood. Today three faint gray lines are visible at the center of my husband’s chest — the last traces of a tattoo his mother gave him when he was a child, slicing his skin and filling the wounds with ash, to protect him from evil spirits. That was his health insurance.

My first disillusionment with the medical profession had to do with the pharmaceutical industry: In 1993, while I was in residency, I saw that estrogen was being prescribed indiscriminately to menopausal women without informed consent. The most commonly prescribed estrogen, Premarin, was the top-selling drug in the U.S. at the time. We doctors were supposed to tout estrogen’s benefits: it’s heart healthy, good for the bones, and stops those annoying hot flashes. That was the party line, and patients believed us. But there’s nothing in the world you can say only positive things about. Even broccoli causes flatulence. [Laughs.] . . .

My suspicions about estrogen were confirmed by a study the National Institutes of Health [NIH] launched in 1991. It was a fifteen-year clinical trial on the effects of hormone therapy on healthy menopausal women. A portion of the study was stopped early, in 2002, because of higher-than-expected incidence of breast cancer, heart attacks, strokes, and blood clots in participants who were taking estrogen plus progestin. The study also found twice the rate of dementia in women over sixty-five who were taking estrogen and progestin — and we’d been telling people it was good for the brain!

In 2002 the NIH added estrogen to its list of known human carcinogens.

“Who Will Heal the Healers,” Pamela Wible, interviewed by Jamie Passaro, November 2009

In 2000 GlaxoSmithKline spent more than $92 million on direct-to-consumer advertising on a single drug, Paxil, which is more than Pfizer spent the same year on Viagra, and those Viagra ads were all over TV and magazines, and even appeared on race cars. The Paxil marketing campaign took a product that had produced spotty results in early trials — including one so riddled with side effects that the company had seriously considered shelving the drug — and turned it into a blockbuster, so called because its annual revenue surpasses $1 billion.

When they realized that they could sell Paxil not simply for depression, where it was competing with Zoloft and Prozac, but also as the first FDA-approved drug for social anxiety disorder, they went all out. They organized and funded a public-awareness campaign — “Imagine being allergic to people” — that didn’t even mention the drug but helped sell the condition. Large numbers of people went to their physicians asking for free samples, which GlaxoSmithKline, of course, made sure were abundant.

“Side Effects May Include,” Christopher Lane, interviewed by Arnie Cooper, March 2012

Medicare will not pay doctors decently for the time it takes to say, “It’s not a good idea to put a pacemaker in your dad,” or, “Another round of chemotherapy will not benefit you.” But it will pay a fortune for drugs and devices. The financial incentives benefit the highly profitable medical-device and pharmaceutical industries, which spend enormous amounts of money promoting their wares to doctors and paying for medical studies that suggest more and more people ought to use their products. . . .

When we say to doctors, “We’ll pay you thousands to prescribe the expensive chemotherapy that you know will be ineffective because it’s too late, but we’ll pay you only fifty-four dollars to talk to your patient,” we’re telling them what we value. Why have we set up a system where a physician would have to be a saint to do the right thing?

The Republicans have made a tactical error by constantly using the term “Obamacare,” because it sends the subconscious message that “Obama cares.”

In her white coat, with her stethoscope, [my wife] Norma was virtually indistinguishable from the rest of the staff — the interns and residents and attending physicians. Every few months, she rotated through a different service — surgery, internal medicine, obstetrics and gynecology, psychiatry, family practice — each a separate world, with its own rules and customs, passions and politics.

There was the surgeon from Texas, who insisted that country-and-western music be piped into the operating room. There were doctors who treated diseases rather than people; those who put money first; those who made mistakes and tried to hide them. And doctors who were sincere and caring, who still believed in talking with patients and in small, redeeming acts of mercy. The best of them knew that no matter how strong the medicine, healing is always affected by more than the intended cure; that we are affected by everything — what we eat, the weather, our dreams, our relationships, our faith or lack of it. These doctors knew how to listen to their patients, and to their own hearts. They honored the shimmering mystery we are — even as pain knots our insides, and our life leaks away. One doctor, asked by a student how he kept from being overwhelmed by all the suffering, answered: Have you ever been in a great cathedral? Yes, the student said. What did it feel like? The student remembered the awe, the reverence, the sense of being in the presence of something greater than herself. The doctor nodded.

The Sun: Gary Younge, writing in The Guardian, says the U.S. is “a country where it’s easier to obtain a semiautomatic gun than it is to obtain healthcare.”

Ralph Nader: It’s worse than that. A peer-reviewed study from the Harvard Medical School in 2009 — this was before Obamacare — said that forty-five thousand people die in this country every year because they can’t afford health insurance; their life-threatening illnesses aren’t diagnosed and treated in time. That’s almost nine hundred people a week. Nobody dies in Canada, Japan, Taiwan, Germany, Norway, Denmark, or Austria because they don’t have health insurance — not one person — because they’re all insured from the moment they’re born. But in the land of the free and the home of the brave we allow this to happen. Where the heck is the patriotism? Is it patriotism only when you have a flag and a tank? 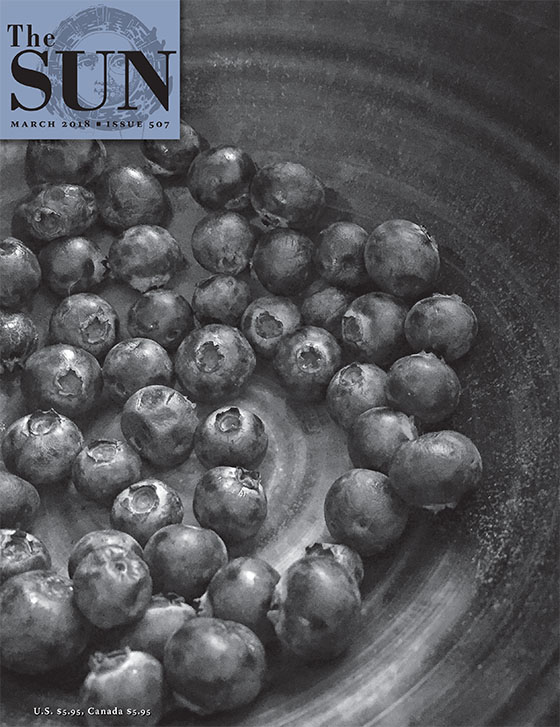 By Megan Fulwiler
The Dog-Eared Page

The World Of Love

The Book Of Saints