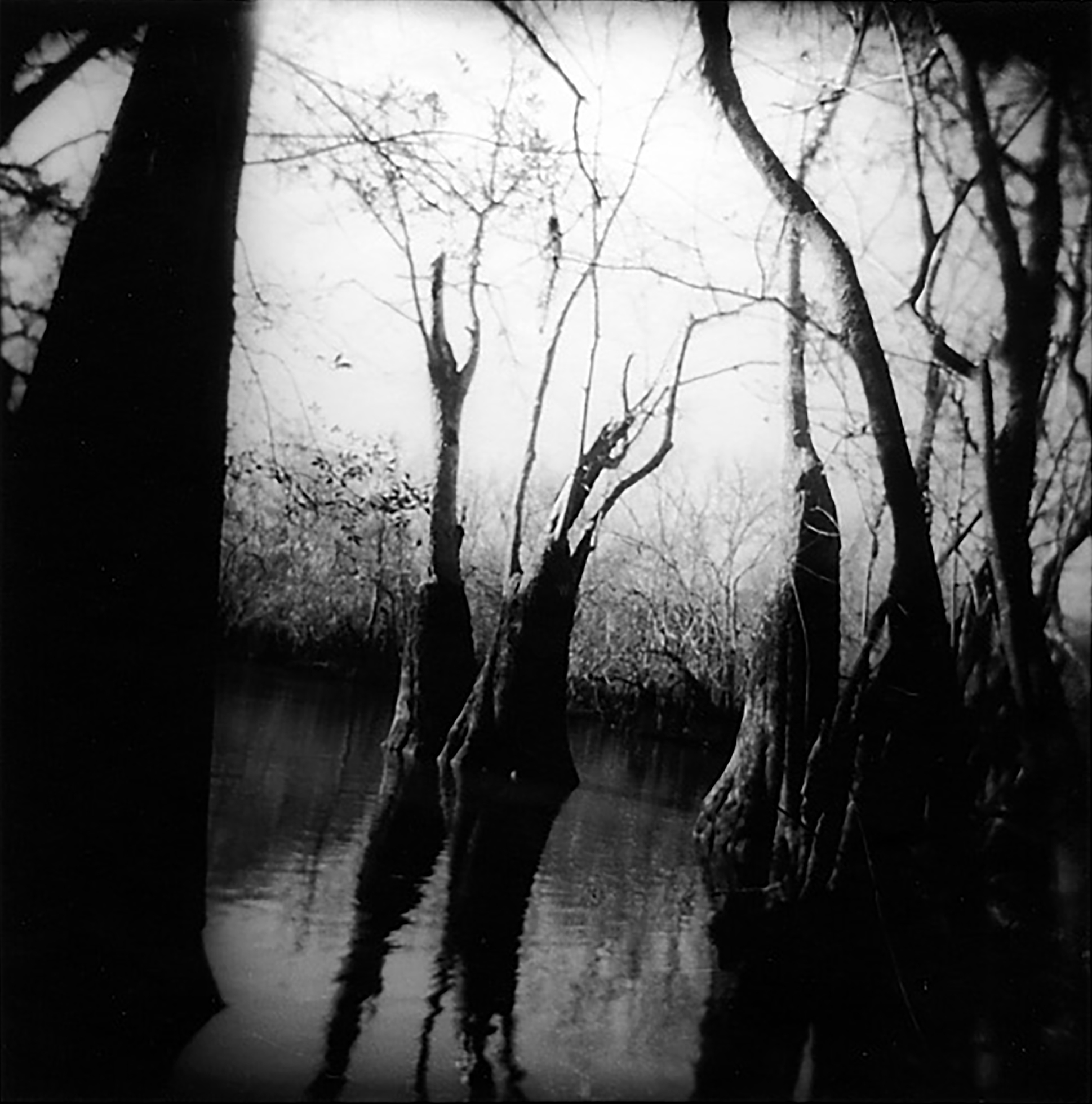 I step on the shovel blade and push down with all my weight. The scent of musty earth fills my nostrils as I turn the clod of moist dirt — “Richest dirt in the world,” my dad is fond of saying. As I crumble the clammy soil in my hand, I think, If it’s so rich, why are we so poor?

I pull a huge night crawler from the clod and toss him into the margarine container my mom gave me. We eat tons of the butter substitute because “it’s healthier for you,” she says. Sweat drips from my forehead even in the cool of the dark woods, and I dream of another place, far away from this Louisiana heat. I’m digging worms because I know they will work well as bait tonight during this full moon, even though catfish rely on their sense of smell, not eyesight, to find food in the murky water. Everything is murky in their world, moon or no moon.

The sun set more than an hour ago, but the stifling heat persists. I smell like dirt and worms — not a complaint for a fourteen-year-old boy. I flip over my pirogue (pronounced “pee-row”). That’s the Cajun word for a flat-bottom canoe built from plywood instead of fancy fiberglass. Last December I wanted the pirogue more than anything. On Christmas morning I awoke to a new fishing pole, a life jacket, and a canoe paddle, but no boat. Still, I was happy to have gifts at all. My dad sent me outside to the toolshed for a wrench, to put together my younger brothers’ toys. The “shed” was an old porta potty without the potty. My dad worked for a porta-potty business during the recession last year, but Mom would not allow anyone in the family to talk about it.

Dad was unsatisfied with the wrench for some reason and said to me, “Go get me the big, flat-blade screwdriver. I think I left it on the ground next to the toolshed.” He followed me outside. When I started to open the porta-potty door, Dad slammed it shut, grabbed my shoulders, and turned me to the left. Right there next to the shed, set up on wooden sawhorses, was the pirogue. I turned and hugged my dad, then ran inside and hugged Mom and both my brothers for good measure. Dad followed, laughing, “You going to go look at it or just hug everyone?”

My parents had saved for more than a year and still had to make payments to Mr. Bessette, the boatbuilder from Plaquemine. I spent the next several months painting and sanding until the pirogue looked like an expensive fiberglass model. I wanted it just right before I started paddling up and down the muddy canal behind the house, setting catfish lines at night, fishing during the day, and playing Navy in the flooded woods down the road.

The rainy Louisiana winter turned to spring, and the pirogue was launched. I told my little brother to hit the front of the boat with a Coke bottle — “hard enough to break it.” He swung with all his might, but the bottle stayed intact, and his hand stung from the impact. “Forget it,” I said and shoved the pirogue into the canal. The first few paddle strokes propelled me swiftly through the water. It was all in my grasp now: freedom, adventure, and possibly a way to make a bit of money for the family.

I set my first catfish line that night and caught a few small ones. I knew if I was allowed to leave the canal and paddle into the main lake, I could fill the boat with catfish. I asked my mom, who said, “Ask your dad.”

Dad said OK — “but stay within sight of the canal.” And thus a plan for the summer was hatched. I saved every penny, nickel, and dime — and, when I was lucky, every quarter. The elderly couple next door paid me two dollars in quarters to mow their yard from time to time. They told me to save it for college, but I used it to buy nylon twine and fishhooks to make a twenty-five-hook catfish line. Just in time for summer break.

Now I load the paddle, life jacket, and five-gallon bucket holding the catfish line and hooks into the pirogue, followed by the plastic container with the fresh-dug night crawlers. A small cubby in the back of the boat holds the container tight so it doesn’t slide around. I push the boat into the water and hop in. A touch of the paddle to the water and the light boat moves forward. In twenty minutes I am out on the lake, where I tie the catfish line to a pole I stuck in the muddy bottom weeks ago. I let the wind blow the boat as I attach worms to the hooks and feed out line from the bucket, careful not to let a hook catch me instead of a fish. The worms are dry and easy to hold, until I insert the hooks into their bodies. Then they release a slime from their skin as protection, but it doesn’t save them from being impaled to become food for fish.

By the time I finish setting out the entire line, it’s gotten dark, and I paddle home. The cool breeze feels good on my face, and the swamp smells sweet at night. At home I tie the pirogue to the creosote boat dock I helped my dad build using old lumber he found at the dump. I spent hours standing in the smelly water, sinking posts into the soft muck below the surface. Dad drove the poles in deep while I held them straight, the creosote raising red welts on my skin. The posts will continue to give off an oily film on the water for years to come.

In the morning I wake up before everyone else and quietly leave the house. The mockingbird is loudly singing a twirling tune to welcome the new day as I paddle out to the lake to check the lines, dreaming of large catfish — maybe twenty or thirty dollars today. I’ll give half to my parents and keep half for myself. As I approach the pole I tied the catfish line to, I see the line jerking around. The fish that took the sticky worms in their mouths are shaking their bodies back and forth underwater, trying to free themselves from the hooks. I pull up the line and find a big, fat catfish on the first hook. Careful of his sharp spine, I slip a hand over his slimy head and, with a pair of needle-nose pliers, twist the hook from the fish’s mouth. I drop him into a bucket, and he speaks his strange catfish language to me — a croaking sound that I’ve read comes from air sacs in their bodies but certainly sounds like a chastising voice: Put me back in the water.

By the end of the line I have a bucketful. Thirty dollars for sure. On the way to the lake this morning I paddled by an older man sitting on his dock who said he would buy all I caught today. Daydreaming of having money, I reach down for the last catfish, and as I close my hand around his spiny dorsal fin, he shakes his body violently. Before I know what’s happened, the spine goes straight through my hand. Blood squirts out, pulsing with my heartbeat. I pull off my T-shirt and wrap my hand tightly to stop the bleeding, but the throbbing continues. I leave the last fish on the line and, with one hand, paddle to the old man’s dock to show him the fish. I tell him I want thirty dollars, he counters with twenty, and I take it. When he sees my hand, he asks if I want a car ride home.

I sneak into the house and unwrap my hand. The swelling is massive. The hand looks like a club. My mother walks into the room, turns pale, and ushers me into the car.

“Don’t tell your dad tonight when he gets home,” she says. “Let me.” She has always kept Dad calm during times like these.

At the hospital the doctor says the swelling is what caused the bleeding to stop. He gives me a tetanus shot and sends me to the discharge office. The bill is $125. I hear my mom asking if she can pay half now and the rest in three months.

“Yes, of course,” says the pleasant woman at the desk.

I feel ashamed that I’ve caused my parents to spend so much money. Dad has been looking for work for a few months, so our family budget is even tighter than usual — no cushion for emergency-room visits. I tell Mom she can have the whole twenty dollars instead of half.

We get home, and my mom makes me a peanut-butter sandwich — the jelly ran out a few days ago. I wolf it down with a glass of water, grab my shovel and bucket, and head for the woods across the street. I start digging earlier today, because this time I need fifty worms. I must catch enough fish to pay the hospital bill. Maybe forty dollars for tomorrow’s catch. Visions of croaking catfish fill my mind as I scoop dirt before darkness sets.

For A Future You

Mothers Of All Pandemics