Under The Influence | By Stephen J. Lyons | Issue 550 | The Sun Magazine
close 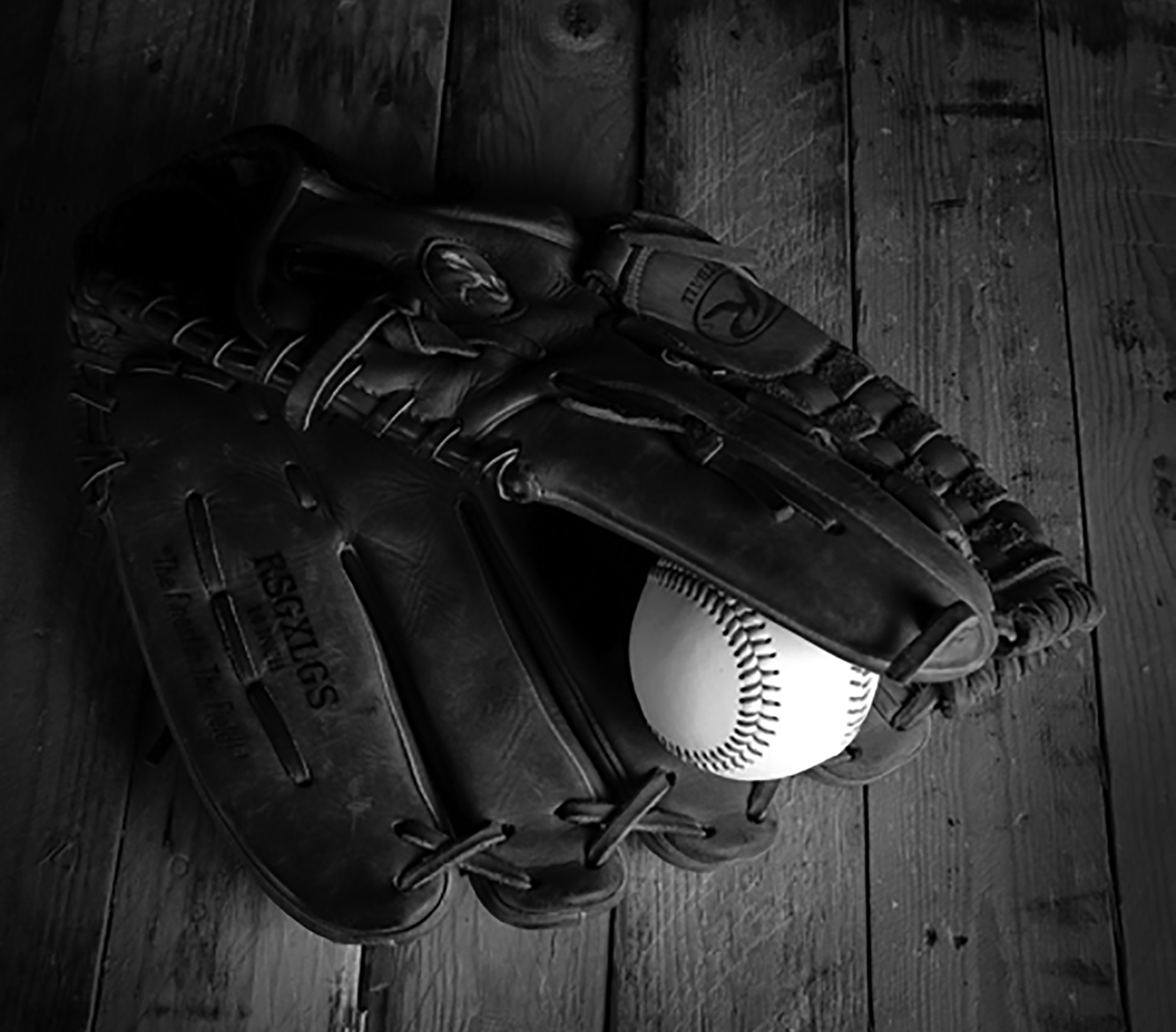 In his prime my grandfather could hit the most beautiful fly balls. Behind his wood-frame house, on the long, narrow lot with the rusty rabbit cages and the fruit cellar where we hid from tornadoes, sat his own field of dreams. Here my grandfather was king: the empty diamond, glorious in its isolation; the clean white chalk of the foul lines; the unattainable fence; the comforting summer smell of fresh-mown sod; and the raked dirt, ground to the fine black dust that is the lifeblood of eastern Iowa.

My grandparents lived their entire married life on the southwest edge of Cedar Rapids, a city in the final throes of the industrial revolution. The Quaker Oats plant and the Brer Rabbit Molasses plant emitted a grainy stench. Underneath that odor was the smell of the working class: an oily, rusty smell found in machine shops and feed stores, where men like my grandfather Chuck, with his sixth-grade education, could punch the clock and make enough to buy a house and an out-of-date Chevy pickup, then marry well and raise three lovely daughters in relative comfort.

I spent summers with my grandparents as a boy. My grandfather seemed old to me then, but he was only in his forties, just half his life lived. His days were ruled by routine. Up at 3 AM, he’d leave for his job at the Cedar Rapids city-bus garage. Grandmother, awake with him for the moment, packed his lunch: a steel thermos of Folgers, white-bread sandwich of beef or pork, hard-boiled eggs in their shells, and a kolache or sugar-dusted piece of poppy-seed coffee cake. This was their life, year after hardworking year, until the cancers and heart disease, then the divvying-up of the backyard junk that some in my family coveted as potential antique gold (but was, alas, simply rusty junk in the end), the eventual razing of the house that held so many memories, and the final distribution of an estate that wasn’t much but somehow held five hundred dollars for each of us grandkids.

On the baseball diamond is where I had Grandpa all to myself. While I ran to my position in the outfield, he stood at home plate, a cigar stuck in the side of his mouth, long ash ready to drop. He wore his off-work uniform of OshKosh overalls, either a V-neck white tee or a short-sleeved shirt, and a scuffed pair of Wellingtons. On bowling-league nights he slicked up in pressed slacks, Western-style sports shirt, and spit-polished oxfords — all courtesy of Armstrong’s in downtown Cedar Rapids, where Grandma also bought my school clothes the week before I returned home to my mother in Chicago. Grandma always took time to indulge in her favorite lunch at the store’s cafeteria: a goose-liver sandwich.

My grandparents’ yard teemed with snakes — racers, greens, and garters, easy for a city boy to catch. They curled around my wrist like reptile bracelets, seeking warmth. And even when they bit, I didn’t give the pain much thought. Hurts were temporary then and easily soothed with the balm of a popsicle, a bike ride, or a swim. What I do remember about those summer days is this: the world seemed large and incomprehensible. The hardwoods near the house were wild. The Cedar River, which flooded and receded along the edge of the woods, seemed as wide as the Mississippi. The furrows between corn rows were trails without end. The train trestle over the river was a trapeze without a net. Only once did I walk across it, frightened with each step, cautiously listening for whistles and watching for the cyclops of the train’s light announcing a freight coming across the plains. I stopped taking such risks as I gradually learned of all the unannounced ways the world can trip you up when you are not even daring it to.

My grandfather’s hitting technique began with a ritual warm-up similar to the movement of an oil derrick. Bat in his left hand, ball in his right, he would swing both arms in a circle several times, searching for the perfect timing. When bat and ball were in harmony, he would lob the ball above his head, grab the bat with both hands, and crack! A soaring fly — a “can of corn” — to his waiting grandson from the dark, urban streets of Chicago, a place my grandparents equated with Gomorrah. My grandfather would step back from his swing, let out a cloud of smoke from the stogie, and admire the arc of the ball that would, just for a second, disappear into the humid air.

At that perfect baseball moment, he seemed to be both there and not. What was he thinking? His dreams and feelings he mostly kept to himself. I understood and respected this. After all, I was a shy boy who could never begin to express the tide of complex emotions that engulfed me: separation, divorce, visitation rights, stirring hormones, and a wish to attain baseball purity. Mostly I did what I was told. Each summer, at Chicago’s Union Station, my mom gave me a kiss and put me on the Empire Builder for the train ride to Iowa to spend long weeks alone with my grandparents.

Grandpa’s reverie would soon be interrupted by his certain disgust when he saw me flailing about in center field, unable to catch the easy fly ball. “Jesus Christ!” he would say, and I, the sensitive, arty boy, would be temporarily ruined.

Almost every weekend during those summers Grandpa would take me along on visits to his parents’ failed farm near Chelsea, where the Iowa River cuts a handsome swath and where my Czech aunt Herring still cooked on a wood-burning stove. It was only on those drives — after he’d drunk several beers in the dimly lit taverns of towns like Keystone, Vining, and Elberon — that my grandfather at last let his feelings show in under-the-breath monologues punctuated with words I was not allowed to say. He carried on imagined conversations with relatives, both living and dead, who had done him wrong. The transformation was gradual, intensifying with each bar stop. I waited in the truck with a soda and a singing bladder. When I snuck out of the pickup to peer into the dark, blue-collar bars, I saw men like my grandfather: hardworking guys sipping Old Milwaukee and Wild Turkey in the middle of the afternoon, the fog of Lucky Strike and Swisher Sweet smoke surrounding their faces in the blue glow. My grandpa would be standing at the bar, slapping down the box of dice to see if he could win his drink.

These were men who rarely strayed from their pre-ordained station. They knew the general direction their lives would go: thirty years of toil at factory or farm, a modest pension, and then all that fishing. Escape routes — St. Louis, Chicago, California even — could not compete with the pull of the familiar. Nor was escape worth the disruption. When you pushed against the mold, it always ended badly.

After a half hour or so Grandpa would come stomping out and toss me a bag of Beer Nuts, and off we would go to the next town. The change in his emotions — and his increasingly erratic driving — was startling. It was as if I no longer existed, although I sat close to him on the Chevy’s bench seat. He cracked open the side vent window and relit the damp, partially chewed cigar that had been in his mouth most of the day. The summer wind blew the hot ashes back onto my bare arms, but I refused to flinch. I imagined the sharp stings as snakebites.

By now it was late evening. The truck’s headlights shone on moths and mayflies, and the corn and soybean fields were ablaze with lightning bugs. Grandma would certainly be worried, looking out the front windows and getting angrier with each passing moment. The truck heaved and groaned, and when I dared to look at the speedometer, I saw we were doing eighty miles an hour. Grandpa was passing cars on steep, stomach-fluttering hills and blind curves, swerving and swearing as he steered in the general direction of Cedar Rapids. Pedal to the floor, slamming the stick shift in tandem with the abused clutch, Grandpa intensified his tirades: so-and-so was a whore, such-and-such a no-good son of a bitch, a bastard, or worse. For emphasis he would roll down the window and spit.

Who knows why we never crashed? Just lucky I guess. Seat belts and airbags were nonexistent then. Our bodies were vulnerable to jagged metal, fragile windshields, and the gravelly washboard roads.

It was during those wild rides that I felt closest to Grandpa. I never complained about his driving. I kept my mouth shut, as I had been raised to do, and dared not judge him. I didn’t know at the time that drinking and driving was wrong. I knew only that I hated the same people he did, even though I had not met them. All that mattered was that they had wronged Grandpa, my grandpa, who hit pop flies to me in the ballpark behind the rabbit pens and the piles of rusty junk, amid the remnant prairie grasses where the snakes basked. I snuggled closer to him to show my loyalty. See, I am your grandson. I belong to you. Placing my head lightly against his shoulder, I could smell the oil, the sweat, the Old Milwaukee.

At that moment I loved him completely — my grandfather, who could fix anything that broke down in all of Iowa, who made sauerkraut and homemade wine in the garage, who let me win at poker. I listened to him rage, and I heard every word that came spilling unfettered from the dark chambers of his heart. And I beheld him in the soothing glow from the yellow dashboard of the wobbly Chevy that would miraculously carry us back home to the rabbits and snakes, back to my grandma, and back to my roots.