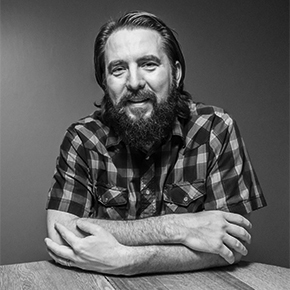 Joe Wilkins is the author of a novel, a memoir, and four poetry collections, including Thieve and When We Were Birds. He lives in Oregon.

I wasn’t good at sports, like he was, but when it was just the two of us, he liked to play pretend. That, I was good at. Whether we were knights or ninjas or mountain men or astronauts or soldiers in Vietnam, he listened with his whole self — intent, leaning in — to whatever story I was telling.

I pretended to be busy on my computer until she leaned so close to me I had to sit back and look up. She had my attention now. She smiled with one side of her mouth. “That was my mom,” she said. “Fucking Wicked Witch of the West.”

Tell me how to do it, Father. All of it, I mean. How to be a better fisherman, a better man, a better being on the earth. How to say a grateful prayer for the silver fish given, how to open my two hands and let go of whatever darkness I have gathered.

Boys, Ten In All

The first bends his knees and raises his clasped hands over his head. Aims the slim knife of himself at the water. And leaps.

He drapes one hand over the wheel, reaches the other out to her, palm up, like he’s trying to make a point, like he’s trying to come to the point — but she’s not listening. We don’t even have to say that. You can see it in the way her gaze has gone as flat and vacant as these plains. See the sunburnt angle of her jaw? That quick tremble of her lip? For her sake let’s say that, finally, he shuts up.

I wander off the basketball court, the pain rising and crinkling into stars. There are bits of garbled conversation, my own heaving breath. No blood that I can feel — but space, I need space, to be away from other bodies, to be alone in my own blood-heavy, throbbing body.

You, All Of You

His palsied hands shiver as he twists the fishing line one, two, three, four times around, then threads it through. He pulls the tangle of line tight and drops the blue-silver lure. It swings between us. “That’s a fisherman’s knot,” Pa Peters tells me, and he chuckles and pushes his thick glasses up the bridge of his bent nose. “That’s how you do it.”

In April I believe only in lilac, dogwood, and wisteria — such suddenness and color, indecency and mess, / always opening and opening, and fading, and falling away.

August 2009
What Do You Think? We love getting letters to the editor for our Correspondence section.
Has something we published moved you? Fired you up? Did we miss the mark?
Send A Letter