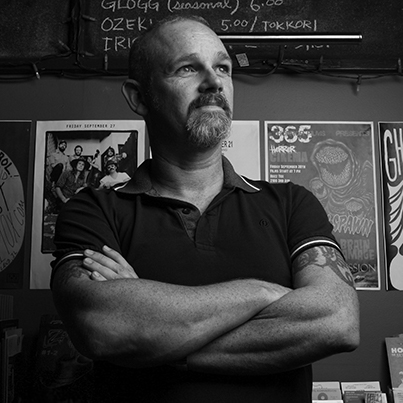 Kelly Daniels is the author of the recently published novel A Candle for San Simón and the memoir Cloudbreak, California. Born and raised in California, he’s spent the last twenty years trying to find his place in the American heartland. He now lives in Le Claire, Iowa.

In a bus, bumping elbows with messy humanity, I create memories that will bolster me for life. Our lives, as the author of Job reminds us, are short and full of trouble. The best we can do is connect, share a smile over this gift of existence.

It was the first Friday of spring break, 1984, when I climbed into the bed of Greg’s compact truck, leaned back against the cab, and watched the keg party fade into the distance as we drove away.

Three months before his third birthday, his Italian grandfather (on his mother’s side) set him on a proper bicycle, pushed him forward, and shouted, “Spingi, spingi, spingi!” Just like that, he rode down the driveway.

The Apostate Of Orange Street

I was dressed and ready for church, waiting while the others bustled about in preparation, when a sudden conviction took hold of me: “I’m not going,” I told my mother.

The title “visiting instructor” suited me. Born into a life of hippie nomadism (even living out of a van at one point in my childhood), I’d been roaming since I’d left home at seventeen. An impulsive enrollment in graduate school at the age of thirty had been intended to impose order on my life, but at thirty-five I was as adrift as ever.

Six years after my father left us, in the summer of 1977, my mother, my younger brother, and I were living in a single-wide trailer in the desert of Wildomar, California. My mother’s sister Anne and Anne’s husband, Gerick, lived with their boys in a double-wide on the same property, ten acres of scrubland my wealthy grandparents had bought as an investment. We must have resembled squatters, but we were there legally. I was ten and would enter the fifth grade that fall.

A Friend Of The Devil

Between the ages of four and nine I lived in a California desert community called Anza, a gathering of burnouts, hermits, and rejects where I had come with my mom and little brother, Eli, after my parents’ divorce.

Our family’s involvement with the Church of the Living Word — aka “the Walk” — began with plain white cassettes. At first just a few lay scattered around Mom’s tape player, but they proliferated fast, covering shelves and filling drawers, even spilling from the car’s glove compartment when I opened it.

July 2015
What Do You Think? We love getting letters to the editor for our Correspondence section.
Has something we published moved you? Fired you up? Did we miss the mark?
Send A Letter