To test my new answering machine, I call myself at the office as soon as I get home. The recorded announcement says I’m not there. I reply, “Of course you’re not. You’re here.” Norma laughs from the next room. For several weeks, with growing amusement and a hint of dismay, she’s been listening to me evaluate all the answering machines and their features: automatic redialing, remote playback, and — Norma, get this! — a speakerphone that lets you carry on a conversation from anywhere in the room.

When I get to the office the next morning, I check to see if our new machine really works. (Our old, no-frills machine was reliably unpredictable, taking some messages and not others, until it stopped working at all.) The volume control is turned up a tad high, which makes my voice boom out like one of those embarrassingly loud announcements that used to come over the school P.A. system, making everyone snicker at the principal’s ineptitude with the mike. I lower the volume, satisfied I’ve made the right choice — these sleek buttons, the reassuring sophistication of flashing lights and digital read-outs, evoking that heady sense of proud ownership.

I’m not sure what all the buttons are for, not having had time to read the thirty-page instruction booklet. Indeed, I can’t say what’s more amazing to me: the gadgets, or my fascination with them. It’s not like me to get this excited over a machine. I know that for some people there’s a poetry in mechanics or electronics, a delight in discovering what makes things work. While I admire that quality, and wish I were more handy, for me there’s more poetry in poetry. Besides, I’m suspicious of machines. So many of them seem to bruise the spirit, deceiving us with lies about our illusory power, luring us with pleasure guaranteed to make us forget our pain. Other machines seem benign until we become dependent on them. We did this with cars. Now we’re doing it with computers, having convinced ourselves we need information more than wisdom, and that our survival depends on how quickly we can move data from terminal to terminal and from one confused soul to the next.

Thus, I’m wary about which machines I surround myself with, and what I use them for. I got rid of the stereo at the office, because I realized that the music I played all day, no matter how inspiring or impassioned, had become sound, ignored or soothing, and I wasn’t really listening at all. I write on an old typewriter, a manual Underwood, instead of an electric or a word processor, because I write slowly — an unavoidable consequence of thinking slowly — and my typewriter has no problem keeping up. Indeed, I find the steady hum of an electric unsettling, as if I’m wasting time and energy while thinking of the next thing to say.

Am I proud of being a little old-fashioned? Fortunately, not as much as I used to be. Years ago, I imagined my preference for a simpler life — heating with wood; washing the dishes by hand instead of using a dishwasher; growing a few vegetables without sprays or chemical fertilizer — made a statement, set me apart from a culture enamored of progress. Like many of my friends, I thought that being conservative in this regard — if in no other — made my life more authentic. It was a conceit that had nothing to do with the advantages or disadvantages of wood heat or organic gardening, but with the need to be a little different, a little better. How tempting it was to romanticize my wholesome values, my fashionably old-fashioned style. This was to confuse the look of a life with looking deeply into life. How ironic to see such posturing as evidence my life was more authentic — but I always find a story more convincing when the hero is me. Less heroic, though perhaps more authentic, were the deeply troubled and destructive aspects of my own nature; this I didn’t want to see.

I’m reminded of the Luddites, who roamed England in the nineteenth century, smashing textile machines, hoping they could stave off the Industrial Revolution and preserve authentic village life . . . and of IBM, in the 1980s, dreaming of a global village linked by computers. Seemingly worlds apart, these visions share an uncompromising faith in the power of technology, making it something to worship or fear. Both, in their wish to save the world, ignore the human heart, which tells us we need first to save ourselves. The tools for this are available to everyone, but it’s pick and shovel work under a scorching sun, and we find as many opportunities as possible to distract ourselves, and call it progress.

It’s not surprising. We imagine our eyes are windows, through which we see reality, but our eyes are more like mirrors, reflecting back our own beliefs; this, we call “the world.” Perhaps we acknowledge this on some level — seeing how childhood shapes and haunts grown-up friendships and loves — but can’t see how it’s true of everything: politics, economics, the environment . . . everything we call real and believe to be more real than our inner realm, the peaks and valleys of emotions, the ancient landscape of ideas.

Thus, my wife, studying to be a doctor, ponders the appropriate use of machines to keep the dying alive a little longer, sometimes against their own will. Medical technology seems to have redrawn the boundary between life and death; doctors, perplexed medically and ethically, feel like pawns in technology’s controlling hand. To take another, more universal example, we all feel like pawns who may be sacrificed at any time: nuclear weapons, designed to protect us, have become meaningless as a means of defense; using them seals our fate; thus, technology apparently redraws boundaries again.

Looked at closely, such dilemmas, seemingly the consequence of technology, may be seen instead as artful symbols created by the mind, terrifying new ways to confront age-old fears; evidently, the stakes get higher the faster we run from ourselves, avoiding the really important questions — such as who we are, why we’re here. After all, physicians who make death the enemy, whose only goal is keeping us alive, are doing what we all do when we pretend we’re these bodies, like a driver who insists he’s his car. And when we recoil from nuclear weapons, and blame Reagan or the Russians for the fix we’re in, we might consider the immeasurable destructive power in each of us, and whether the bomb is any more or less evil than ourselves. When have we not made war, or prayed for wars to end? A computer error may “start” the next war, but what error started us on this war within, each part of our nature denying the rest, until our soul was divided like so many countries, armed and dangerous, ready to kill?

How much easier to blame technology than to stand before the mirror, not averting our gaze, or to sit quietly for half an hour, eyes closed but inner eyes opened, steadfastly refusing to turn from what’s there: the conditioning and anxiety and fear. Talk about pollution! Talk about a world where we use nuclear power to boil water for electricity (which, as Amory Lovins said, is like using a chainsaw to cut butter) and then look at the tremendous mental energy each of us expends on petty grievances, little worries, protecting who we think we are — with the past for a sword and the future for a shield.

We protect ourselves because for all our technological sophistication, we’re frightened of life, which our technology will never explain or control. In the aftermath of the Challenger disaster, with everyone trying to figure out what went wrong, we all know what really went wrong, what always goes wrong: the unexpected happens; someone suffers; someone dies. Then there’s grief, also uncontrollable, and thank God for that: after the crash, if only for a moment, explanations weren’t needed, faces were unmasked. Like a family that needs a funeral to bring it together, we all paused briefly. But was it Christa McAuliffe and her six companions we eulogized — or ourselves, and our parents and children and friends? For a moment, we were reminded of how brief our lives are, and how much we don’t understand. Then we shrugged and slipped behind our masks, ignoring again the countless other tragedies around us, the questions technology can’t answer — questions it takes the courage of a space traveller just to ask.

Do I exaggerate? Some questions I find nearly impossible to ask. Last winter, for example, I started brooding about how compulsively I eat; I recalled some painful childhood memories but they seemed too painful to bear. Instead, I became depressed; I started eating more compulsively, which led to feeling guilty, which led to overeating again. This was even more discouraging: I mean, I’m a man gifted with words, who communicates ideas and feelings, but this was like talking to myself in a language I couldn’t understand.

My interest in getting a new answering machine started back then. Maybe being depressed had nothing to do with it. Still, I wonder: during a difficult time, when I felt inarticulate and incomplete, when I couldn’t get through to myself, I bought an answering machine that dials and redials, lights up and beeps, lets me leave “personal memos,” and does countless other time-saving, inconsequential things.

Now that I have it, I’m learning to use it. That’s the nature of technology, which is why the bomb seems like such a threat. The real threat, I think, is our reluctance to listen. The heart asks all the right questions, and we play deaf. 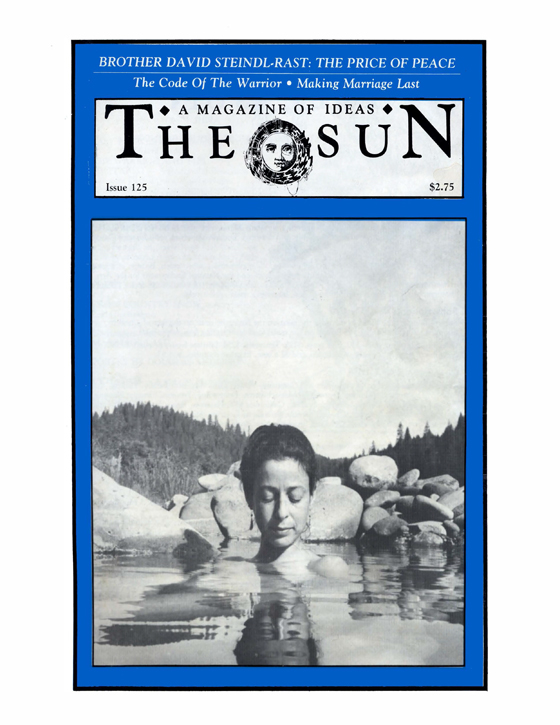 The Warrior And The Militarist