The Minotaur | By Andrew Shalit | Issue 160 | The Sun Magazine
close

In traditional Greek mythology, when King Minos of Crete failed to sacrifice a bull to Poseidon, the god caused his wife to lust after the animal. By it, she conceived the Minotaur, a monster with a bull’s head and a man’s body, which was confined in a labyrinth. There, it devoured human beings, until it was killed by Theseus.

The first thing that must be said is that the Minotaur was blind. Her mother — for the Minotaur, actually, was a woman — torn with guilt for her own sins, blinded the Minotaur soon after her birth. She could not bear to see the eyes of her child staring at her from the face of a bull. She blinded her, and then she placed her in the midst of the labyrinth, of which you have probably heard.

The Minotaur grew up in the labyrinth with no knowledge of any other living thing. As she grew she learned the windings of the labyrinth, learned the places where food was left for her, where water continually flowed, where the sun shone down warmly (for the labyrinth was not fully underground), and where there were soft warm spots for sleeping. Though she was blind, she learned to move through the labyrinth quickly and surely, following it with her hands and feet and even by smell. The walls and turnings acted as familiar guides, allowing her to move freely where others quickly became lost. In this way the Minotaur grew peacefully, knowing nothing of herself or others. When her mother’s servants left food, they were careful to move silently and avoid her touch because they could see she was a monster, and they were afraid.

A change came on the day when the Minotaur first touched another human being. The poor servant was tired, and had lain down to rest under some trees in the labyrinth. The Minotaur stumbled upon him, and he woke up. When he opened his eyes and saw the monster bending over him, he screamed, struck out, and tried to get away. But he was not so lucky. The Minotaur, moving by reflex, struck back. And being filled with the power of her father the bull, she killed the servant with a single blow. She felt his blood on her hands, and thought of the waters she drank. She tasted it, and remembered the taste of some of the foods she had eaten.

This was the beginning of the second stage of the Minotaur’s life, the stage for which she is most famous. She learned the smell of humans, and learned to listen quietly for their steps. She had smelled them before, when they brought her food, but she had always thought the smell was the food itself. Now she knew that the smell came from the bodies of the servants, from a different kind of food. She caught them whenever she could, and feasted upon them. She knew every place to hide, and how to walk through the labyrinth silently, and so she was a good hunter.

Her mother and the king quickly learned what had begun. The queen was sorrier than ever for the birth of her child, now that it had truly proven to be a monster. The servants became more careful. After the first few, they were rarely caught by the Minotaur, who still fed mostly on the dishes prepared by her mother’s cooks.

It was not long, however, before the king realized how he could make use of his stepdaughter. He began sending prisoners into the labyrinth. At first servants carefully followed, to make sure the Minotaur did her work. But after five or six easy successes they realized that such watching was not necessary. The prisoners, unfamiliar with the labyrinth, quickly lost their way and grew tired. The Minotaur had acquired a taste for human flesh. She preferred it to cooked food, and she quickly dispatched anyone she came upon. As an added precaution the king began leaving her without food for a day before sending anyone down. The Minotaur quickly learned what this day without food meant, learned to move carefully through a hunt on the day following. In this way the king and the Minotaur entered into a dark partnership, which continued for many years.

The story changes again with the arrival of Theseus. We remember from other tales that he slew the Minotaur, but this is not what actually happened. He did come to Crete and befriend the daughter of the king and queen. And it was this daughter who warned him about the Minotaur. But she gave him maps, not a string, to help him find his way out of the labyrinth. The rest of the story was also quite different from what is usually told.

We watch him walking slowly, softly, until he comes to a small glade in the center of the labyrinth. And here he has some luck, for the Minotaur is asleep in the glade, lulled by a warm summer sun. When Theseus looks at the Minotaur he is shocked, because he does not see a monster. He does, of course, see a beast with the head of a bull, a beast deformed by years of eating human flesh. But he also sees his lover, the woman who gave him the key to the labyrinth. He sees the body and the soul of his lover reflected in her half-sister, as he looks upon her scarred eyes.

We then see Theseus forget his fears (for even he had some). He forgets he has no sword (for the stories lie there, also). He forgets that this thing before him has killed many men. And he approaches. We see him softly crouch next to the Minotaur, ready to run. He touches her cheek, the cheek of a bull, and he touches the breast of a woman. She stirs and turns her face toward him, reaching out slowly.

Perhaps you will wonder now why the Minotaur did not simply awaken and strike Theseus, killing him as she easily could have done. It was for this reason: the Minotaur had never been touched, and she didn’t know what this thing was that touched her. In all her years, she had always been the first to catch her prey, and as she caught them they fought and cried and struck. She killed and ate them in this frenzy, never having felt their human hands upon her, never having heard their human voices. Now that she was being touched by two such hands, hands filled with the memories of a lover, she did not remember the fighting and killing of struggling beasts. She did not remember that she had gone without food the previous day. Rather, she almost remembers the touch of her mother on those few days before her blinding and her placement in the labyrinth.

We see the two of them again. Theseus remembers his place and his danger. He takes a piece of cord (perhaps this is the source of the myth of the string) and he binds the Minotaur quickly, before she understands. We walk with them. She is calm. His haste in tying her was not needed. She would not have fought. Even bound, she is changed. She is searching her memory for something, something from before, something from outside these corridors whose every groove and branch she knows. We follow, turning every familiar corner, past every fountain and brick wall, known by touch to one, to the other known through the study of maps. We come to the familiar door at the top of the labyrinth, the door we both know, but have neither passed.

We pass through this door now, beyond the walls of the labyrinth. It is here that Theseus leaves me, here that I repeat my story. Still blind, I cannot move from this place. There are no walls around me, and I am lost. 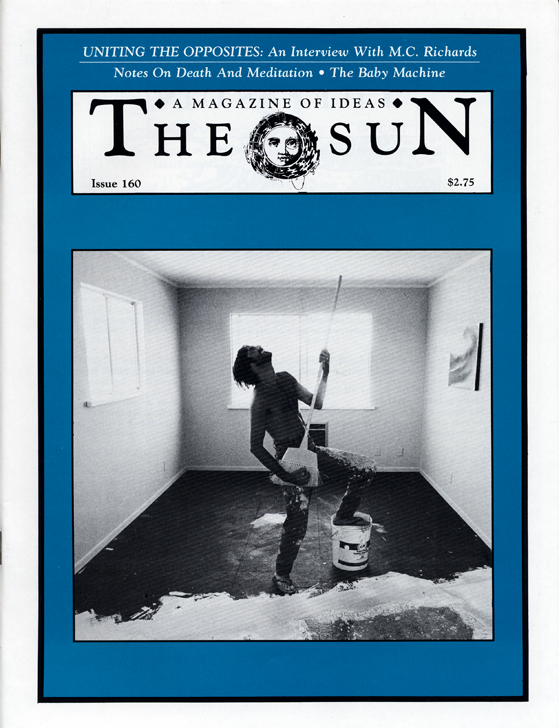 In Pottery, Poetry, And The Person