My mother wanted to flush our pet goldfish down the toilet. My brother and I thought we at least ought to look after its death since we hadn’t done much for its short life.

We had learned about funerals when the President died and preempted the cartoons. My brother and I had watched the long, flag-draped wagon lumber past throngs of silent people. We saw soldiers turn stiffly and salute, clapping guns from one white-gloved hand to another. It was cloudy that day and leaves smashed like mud against our living room window. A photographer was coming to the house to take our family’s picture; my mother had curled my hair and brushed it into long sausages the way she did when we went to church. She told me to sit still and not mess it up. I sat in front of the television and rolled a piece of yellow Playdoh between my hands until it was very long, then put it on the floor and rolled it some more. I picked it up at one end and wiggled it in my brother’s face.

“This is Jackie Kennedy,” I said. He cocked his peanut-shaped head and giggled with me.

Now the goldfish was dead, and I said to my brother, “Let’s have a funeral.”

He had gotten his “butch” haircut for the summer a couple of weeks before and looked like a pear with light brown bristles. He kept touching his scalp as if searching for his lost hair.

“We can ride around the block and stop for ‘Hail Mary’s on the corners,” he said, suddenly excited.

“You know, God didn’t give us prayers to say for goldfish,” said my mother. “Animals don’t have souls like people do.” She was finishing up the breakfast dishes we had abandoned. Her yellow gloves squeaked against the wet bowls.

“But they still need a funeral,” said my brother. “They count, too, you know.”

“What a joke,” said my sister, coming into the kitchen. “A goldfish funeral.”

“You have to help us say the prayers,” I told her. My brother wasn’t going to have his first communion until school started again, and I had an even longer wait. Neither of us was too sure about the words for the prayers we mumbled every week in church. Usually we made up the parts we didn’t know: “Our Father, wart in heaven, hollow bees high name.”

“You can be the priest.”

“Just do it respectfully,” my mother added.

My sister rolled her eyes. “It’s just a fish,” she mumbled, but my mother didn’t hear her.

When we first brought the fish home from the church carnival, I watched it flicker back and forth in its bowl. After a few days, I couldn’t just watch anymore; I stuck my hand in to pet it. But the fish always slipped through my fingers; all I felt was a cold, slippery wiggle on my skin. I gave up after a while.

Soon the bowl grew cloudy with slime, and my brother and I seldom sprinkled any food in the water. My sister complained that the fish would either starve or suffocate, and she shook in huge globs of food while pestering us to clean the bowl. My mother threatened to keep us inside after school. She finally got my father to come after us with his belt; we cleaned the bowl at the last minute to avoid a strapping.

My brother scooped the belly-up fish out of its bowl with a tea strainer and tapped it into a small cardboard jewelry box that I’d found in my mother’s dresser. The fish had been floating in its water for more than a day and was beginning to smell. Lying on the cotton inside its coffin, it looked like a small flame sealed with a dull glaze. I squinted at its tiny scales, and spread out its fanlike fins.

I stole one of my mother’s handkerchiefs to drape over the coffin. My brother and I brushed the cobwebs out of his Radio Flyer wagon and perched a metal milk case in the middle. We covered the milk case with some clean rags and placed the coffin on top. Then we searched the neighborhood for mourners.

Back at our house, I asked my brother, “Where should we bury it?”

“In the prairie,” he said. The prairie was a vacant lot kitty-corner from our house. In the summer, weeds grew over our heads, and mountains of grass clippings left by neighborhood fathers rotted sweetly in the sun. My mother said the grass attracted rats; some of the older neighbor kids said they’d seen dead cats there. Only the tough kids from the next block went in at night, armed with matches and kerosene-soaked rags to build fires.

My sister snuck out a thin, fringed scarf of my mother’s to lay across her shoulders, and a black prayer book. She led the procession down our driveway, the prayer book leaning against her chest, her head bowed. Behind her, my brother pulled the wagon, creaking and rocking over pits in the asphalt. I led the mourners, dabbing my dry eyes with one of my mother’s fragile handkerchiefs, her black lace mantilla covering my face. The three mourners behind me, my brother’s first-grade friends, were wailing and moaning as I had instructed.

As we shuffled up the block, my sister chanted some Latin-sounding verses and the rest of us hummed in response. I counted my steps between the cracks in the sidewalk: one, two, three, thump, as the wagon bumped over each crack. My sister started timing her chants for us to respond on each thump.

When we approached the end of the block, some of the neighbor kids we didn’t play with much wandered out of their back yards and stared at us. Usually, whenever we went past their houses we had the same argument about whose sidewalk it was and whether or not we could use it. This time, they hung back on their front lawns.

“What’re you doing?” one of them asked.

“Having a funeral,” I said from under the mantilla. “Can’t you tell?”

But they let us pass, still staring as the wagon creaked by.

At the first corner we stopped to say a “Hail Mary.” The sidewalk at this corner banked up to meet the busy road that cut diagonally through our neighborhood. I lifted the black lace from my eyes to peek at cars zooming past, hoping someone might notice us.

We followed the sidewalk along the embankment to the next corner where all the old people lived. None of them were outside, though I thought I saw a curtain stir in one of the front windows as we said our second “Hail Mary.”

By the time we reached the third corner, the mourners were tugging on my mantilla and shoving ahead of each other. My brother took the corner a little too sharply, and the milk case tipped over. I rushed to grab the little coffin before the fish corpse spilled out. Ricky, one of the mourners, grabbed the mantilla as I leapt forward, then dangled it in front of me when I turned around. I snatched it from his hands and plopped it back on my head and over my face.

At the last corner we said one more “Hail Mary.” Suddenly I felt tired. The black lace made my face hot, and the swirls and curlicues of its pattern were straining my eyes. Just as I was lifting off the mantilla, my sister announced, “The burial will be in the prairie. Follow me.” Ricky and the other mourners quieted down. I quickly wiped sweat from my face with one hand, then let the mantilla fall back down.

The wagon trembled and swayed as we made our way across the gravel street, the little coffin pitching like a boat on a choppy lake. At the prairie’s edge we waited for my brother to scout out a break in the high weeds.

“Back here,” he waved and, one at a time, we filed in behind him, the wagon, and my sister. He paused before a scrubby cottonwood. “Ground’s soft here.” He kicked the dirt with the toe of his sneaker. I held the coffin while my brother tilted the milk case and pulled out a hand shovel.

He scooped the soil into a small mound next to the hole. Above him, the new leaves of the cottonwood trembled. My eyes wandered up the knotted branches where the pale sun flashed. As I stared, the sun grew dark in the middle and an orange spark leapt across the treetop and behind us into the prairie. I turned my head to keep it in sight, and my sister scowled at me. She invited the mourners to shovel some dirt onto the coffin. My palms were cold and sweaty as I rubbed them together. I brushed more sweat from my forehead and swallowed, my throat hot.

My sister started the recessional song. “Drop the flowers,” she hissed. From the wagon I grabbed the limp dandelions that I’d picked along the way and scattered them on the newly turned earth. Then I walked past my sister into the high weeds.

The spark floated over the sunflowers, dipping low, then gliding up again, orange against the blue sky. My sister was calling, but I was in the deepest part of the prairie now where cinders from the tough kids’ fires blackened a circle of earth. I nudged a fire-eaten branch with one toe, then looked up to my left. Perched on a milkweed flower was an orange and black butterfly; its thin black tongue prodded the flower, its wings pumping slowly. I crept closer, the burning flush on my skin collapsing into a hot core in my stomach, until the butterfly flew out of the weeds and drifted away.

Squatting next to the spent fire, I stirred my finger in the ash, then inspected the specks of soot trapped in the whorls of my fingertips. My brother called me, but I didn’t answer.

He struggled through a wall of weeds, his cheeks scratched a deep red.

“Let’s go,” he said quietly and held out his hand. Suddenly I felt very old, older than dirt. I pushed myself up slowly. As we walked across the street to our house, he told me about the rest of the funeral, but it was as though he were speaking through a string-and-can telephone, his voice thin and far away.

I climbed upstairs for my nap without my mother’s telling me to, pulled down the shades in the room my sister and I shared, stripped to my underwear, and crawled beneath the sheet and comforter. I was hot inside and cold outside. As I lay half in, half out of sleep, a secret I’d forgotten grew clearer and clearer until, clutching the comforter, I woke.

I didn’t know if it had been real or a dream, but I remembered a tree my brother had shown me when I was very little. He had led me to a small cottonwood where hundreds of orange and black butterflies clung to the branches, their wings folded like hands in prayer. They covered the branches so completely that I couldn’t tell them apart from the changing leaves.

As we crouched there, the butterflies crawled over each other to make room for us. I started to touch them, but before I could, my brother shook the branches so hard that the butterflies tumbled in great waves to the ground. Out of the tall grass they rose up all at once and climbed into the autumn sun. 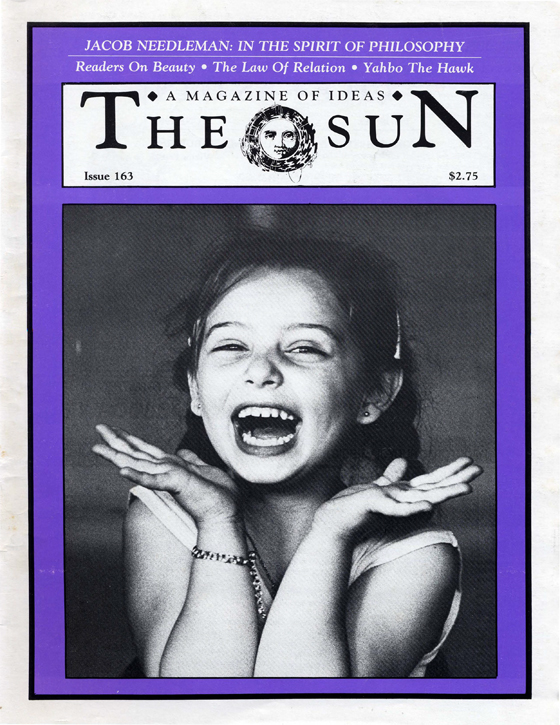 The Things We Learn