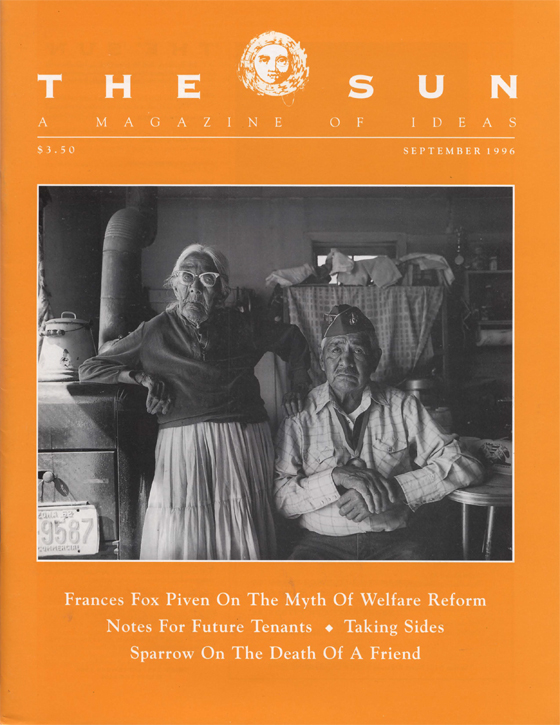 Buying a gun; reading Being Peace, by Thich Nhat Hanh; going to the hole for fifteen days

If Jesus Christ were to come today, people would not even crucify him. They would ask him to dinner, and hear what he had to say, and make fun of it.

Why Welfare Reform Is An Attack On All Women

What is being proposed under the title “welfare reform” is cuts in programs for the poorest and most vulnerable members of American society: nutritional programs and Medicaid programs and housing programs and programs for the aged, impoverished, and disabled. But the program that is most targeted for reform is Aid to Families with Dependent Children (AFDC), a program for poor mothers and their children. Men can get benefits, too, but the overwhelming majority of parents on AFDC are women, about five million of them, with about nine million children.

My friend Clayton died just before Christmas. He threw himself from the forty-fourth floor of the Marriott Hotel. Clayton Brooks was a poet, an actor, a taxi driver, a playwright, a drug addict, and a lover of humanity.

The tests came back negative: Colete Lopez will be all right. She does not have AIDS, hepatitis, or cholera. According to the New York Times, the six-year-old, who attends first grade at PS 150, was stabbed in the leg with a hypodermic by a fifty-one-year-old man with no known address.

My boyfriend, Tony, tells me he remembers seeing Muddy Waters sitting in a chair on Maxwell Street in Chicago playing the blues. He says it was a Sunday morning and Muddy was playing alone. Now the Maxwell Street market shines with the silver circles of cleaned hubcaps, hanging for sale.

The astronaut and his guides were making their way toward Assembly when Sally Jerzik lost her finger in the box press. People said her screams were louder than the conveyors, louder than the hoppers even.

Silas works at a social-service agency. He sits inside a cubicle, behind a metal desk with a simulated-wood surface. One by one, people — mostly old women, but some old men, too — come and sit on a metal folding chair across the desk from Silas, where they weep and whine and struggle to maintain their dignity and finally grow vexed and demand their Social Security checks.

He told me about his own first “transgression”: fondling a seven-year-old girl; how one thing led to another (he was mostly vague about his crimes) until he finally got caught. How his greatest fear was that he would someday molest his own children, though he didn’t have any yet. The other inmates at Coxsackie had pinned a label on him: “tree-jumper,” a guy who stalks children and hides in bushes or behind trees.