How is it that you do not know how to interpret these times?

If a free society cannot help the many who are poor, it cannot save the few who are rich.

America has the best-dressed poverty the world has ever known. . . . It is much easier in the United States to be decently dressed than it is to be decently housed, fed, or doctored.

We have grown literally afraid to be poor. We despise anyone who elects to be poor in order to simplify and save his inner life.

For those who have lived on the edge of poverty all their lives, the semblance of poverty affected by the affluent is both incomprehensible and insulting.

When society does step in to help out a poor woman attempting to raise children on her own, all that it customarily has to offer is some government-surplus cheese, a monthly allowance so small it would barely keep a yuppie male in running shoes, and the contemptuous epithet “welfare cheat.”

To blame the poor for subsisting on welfare has no justice unless we are also willing to judge every rich member of society by how productive he or she is. Taken individual by individual, it is likely that there’s more idleness and abuse of government favors among the economically privileged than among the ranks of welfare.

The four sons of my friend heard me say, and repeat: “This box of chocolates is for the four of you. One, two, three, four. Have you heard?” When I gave the box to the youngest, saying once again that it was for all, the little one opened it, and, pressing it to his chest, exclaimed, “It’s mine, it’s mine!” I felt as if I had just witnessed a meeting of the powerful of the earth.

The relationship between our motives and our quality of mind is very subtle. Can we give truly without any expectation of getting something back, just for the joy of giving? Becoming very honest with ourselves is part of our training in morality.

Men feel that cruelty to the poor is a kind of cruelty to animals. They never feel that it is injustice to equals; nay, it is treachery to comrades.

The same suffering is much harder to bear for a high motive than for a base one. The people who stood motionless, from one to eight in the morning, for the sake of having an egg, would have found it very difficult to do in order to save a human life.

As you are, so is the world. 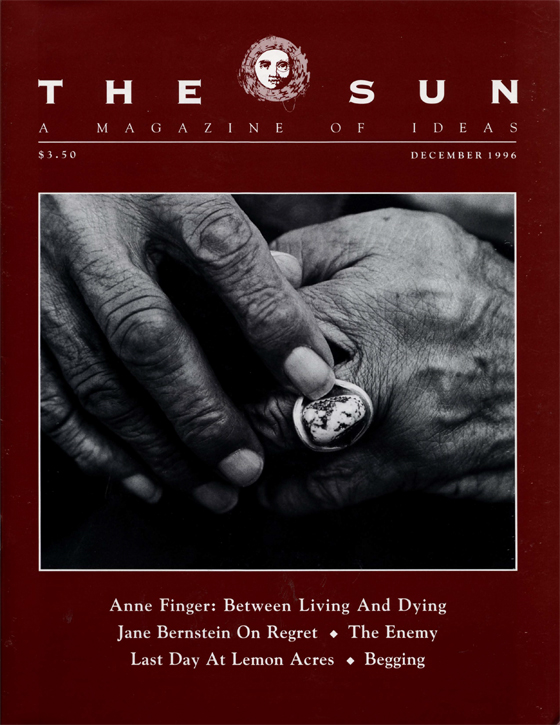 Between Living And Dying

A Conversation With Anne Finger About Disability, Abortion, And Assisted Suicide