I was taught when I was young that if people would only love one another, all would be well with the world. This seemed simple and very nice; but I found when I tried to put it into practice not only that other people were seldom lovable, but that I was not very lovable myself.

Did you ever see little dogs caressing and playing with one another? So that you might say there is nothing more friendly? But, that you may know what friendship is, throw a bit of flesh among them, and you will learn.

To forgive oneself? No, that doesn’t work: we have to be forgiven. But we can only believe this is possible if we ourselves can forgive.

One of the most time-consuming things is to have an enemy.

Anger stirs and wakes in her; it opens its mouth, and like a hot-mouthed puppy, laps up the dredges of her shame. Anger is better.

Anger makes us all stupid.

Could a greater miracle take place than for us to look through each other’s eyes for an instant?

The world is divided into people who think they are right.

Treat the other man’s faith gently; it is all he has to believe with. His mind was created for his own thoughts, not yours or mine.

If you understand something, you don’t forgive it, you are the thing itself: forgiveness is for what you don’t understand.

How should man, a being created in the likeness of God, live? What way of living is compatible with the grandeur and mystery of living?

It’s a hard, sad life for most people. Don’t scorn the simple things that give them pleasure.

My goal in life is never to have a moment when I could not say, “This is how I want to die.”

Once a woman has forgiven her man, she must not reheat his sins for breakfast.

Man in the Cook County Jail being strapped into the electric chair: “This will certainly teach me a lesson.”

Be in the world as though you were a stranger or a wayfarer, and consider yourself one of the inhabitants of the graves.

I thought that I had arrived at the very throne of God, and I said to it, “O throne, they tell us that God rests upon thee.” “O Bayazid,” replied the throne, “we are told here that God dwells in a humble heart.”

Wife and daughter are driving and rejoicing together, another car careens into their lane, and mother and daughter are killed. The other driver is thoroughly drunk in celebration of the birth of his first child. At home, in trauma and desolation, the bereaved husband, after some days, becomes aware of the one person who is suffering more than he is. He drives to the young man’s house, knocks on the door, and confronts the surprised man. He speaks two quiet sentences. “Do not be afraid. I have come to forgive you.” 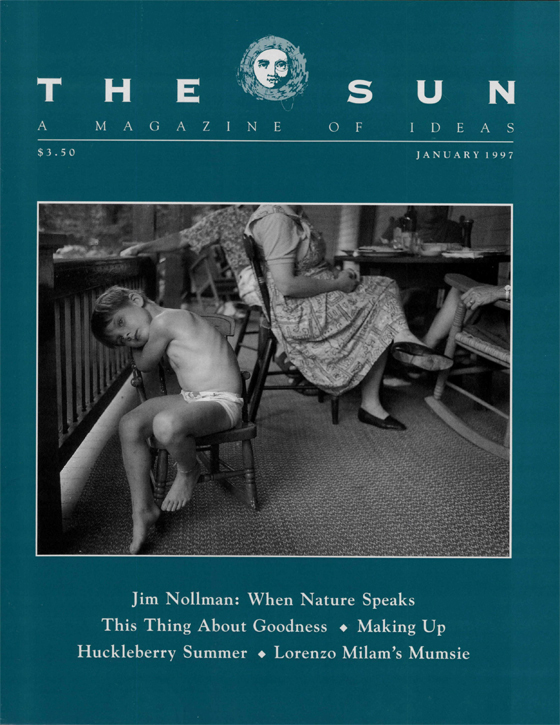 An Interview With Jim Nollman

What Can Happen When You’re Stranded