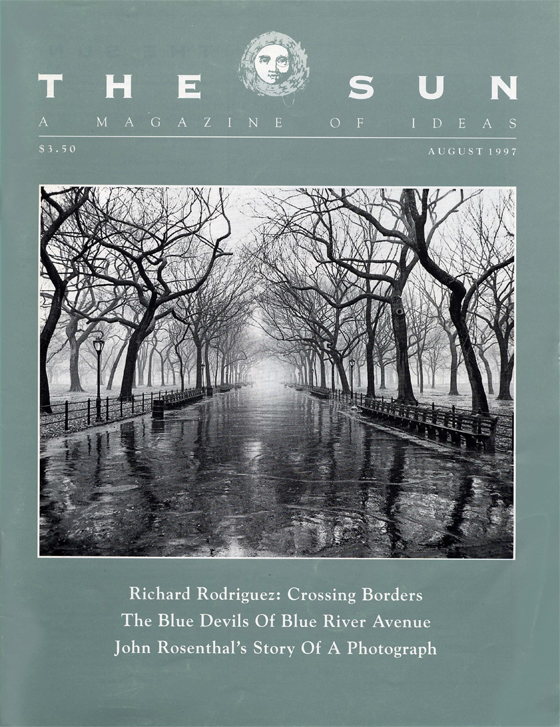 Frolicking in DDT; learning the constellations, remembering a clubhouse initiation

Paradise is exactly where you are right now, only much, much better.

An Interview With Richard Rodriguez

My grandmother always told me that I was hers, that I was Mexican. That was her role. It was not my teacher’s role to tell me I was Mexican. It was my teacher’s role to tell me I was an American. The notion that you go to a public institution in order to learn private information about yourself is absurd. We used to understand that when students went to universities, they would become cosmopolitan. They were leaving their neighborhoods. Now we have this idea that, not only do you go to first grade to learn your family’s language, but you go to a university to learn about the person you were before you left home. So, rather than becoming multicultural, rather than becoming a person of several languages, rather than becoming confident in your knowledge of the world, you become just the opposite. You end up in college having to apologize for the fact that you no longer speak your native language.

When I was growing up in Magdaluna, a small Lebanese village in the terraced, rocky mountains east of Sidon, time didn’t mean much to anybody, except maybe to those who were dying, or those waiting to appear in court because they had tampered with the boundary markers on their land. In those days, there was no real need for a calendar or a watch to keep track of the hours, days, months, and years.

They’re all gone now, but when I was a kid, there were cows all around my house, even though we were only twelve miles from downtown. Half the kids I went to school with, their parents owned cows. Even my own parents, a dozen cows, penned in the field across the street, behind my dad’s saloon. Big brown cows with white faces and large, sad eyes — and long eyelashes, longer even than the ones my mom kept in her top dresser drawer.

The Story Of A Photograph

I felt tired, as if I’d just returned from a trip, a journey that had begun a long time ago, when an unknown craftsman had built a model ship, which had somehow ended up in a Mulberry Street window. The journey had been one of gradual attenuation: a ship, with its immense physicality, had been transformed into a replica, a symbol, and then the replica had been reshaped into a photograph, a symbol of a symbol. Did this attenuation, this slow dematerializing of wood and sail and sunlight, serve a purpose? And what was the next step: a leap into words, into pure meaning?

I pull away and look at her from arm’s length, this grown woman with wet hair. I’ll never know what part of my soul swept through my body when her mother and I conceived her; I’ll never understand the mysterious bond between a parent and a child. I know I can’t keep life from pouncing on her, from tossing her dreams around like a cat playing with a mouse: deadly play, here on this deadly planet. But she’s safe now, here in my kitchen, on this sunny afternoon that can’t last. I hug her again.

Whether I was at the Sambeauxs’ or the Millers’ or the Carrs’, or just out in the street with my little buddies, it was always the same. They were like hothouse tomatoes pushing hard for what they thought was the light. We would hide in a bush, or cluster in the treehouse, or lean back among the interstices of the towering, ragged, catwalk hedge, and the topic would invariably arise, spelled out in red letters above our heads: S-E-X.

Fritz, a gray, wolflike German shepherd, howled so terribly at some intruder that his owner, Igor Lovrak, went into his larder and greased his great-grandfather’s rifle and thumbed gunpowder and bullets into the barrel before he dared walk out into the yard. Even then, he trembled, expecting to find bears or a band of thieves closing in. Just as Igor stumbled outside in his wooden clogs, Fritz leapt so violently at something that he tore out of the ground the thick pipe to which he was chained and, with a terrible din, jumped over a hedge. A cat scrambled up the lamppost, barely escaping the dog.