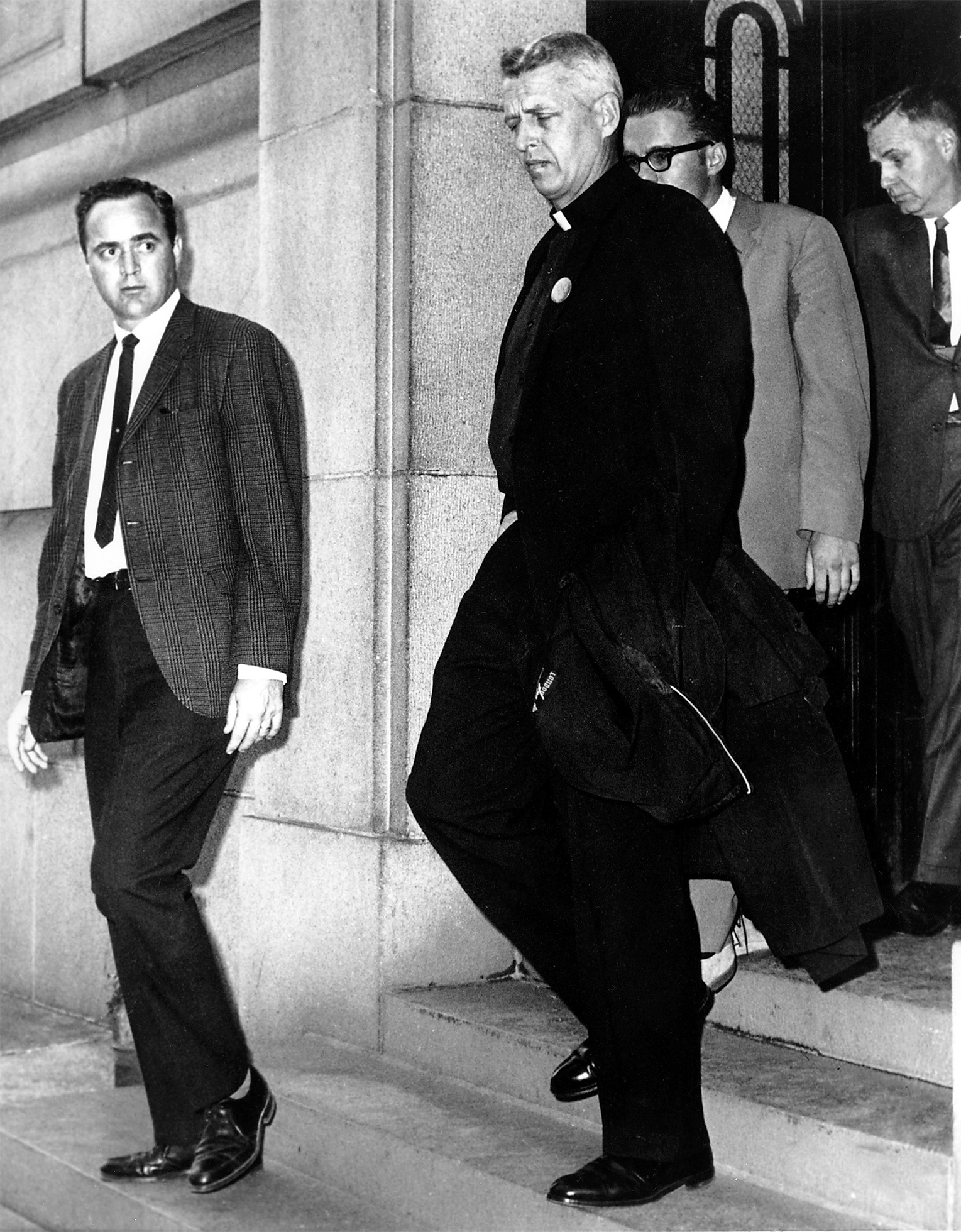 Philip Berrigan leaves the courthouse after being arrested for splashing blood on draft board records in 1967.
© AP/Wide World Photo

Dispatches From The Lamb’s War

In “Dispatches from the Lamb’s War” [July 2003] Philip Berrigan writes of the U.S. “dropping the atomic bomb on a Japan that was already on its knees.” I wonder whether Berrigan would have felt differently if he had been among the first wave of American soldiers poised to invade Japan in 1945. My guess is that his views would be more in line with the vast majority of historians, who have documented Japan’s resolve to fight to the last soldier. I only hope that the rest of Berrigan’s statements were not as misguided.

By identifying himself as a Catholic priest, Philip Berrigan undermines his credibility as a man of peace. The Catholic Church has been perhaps the cruelest nongovernmental organization in human history. Working hand in glove with European colonialism, it has exploited indigenous people on every continent and promoted a culture of racism (Asia, Africa, the Americas), sexism (male-only priesthood), antidemocratic hierarchy (the Pope rules) and elitism (countless scandals and coverups of pedophile priests).

Jesus was a man of peace. He identified with no religion, practiced no rituals, took no one’s money, and followed no book. He found a spiritual guide in John the Baptist, was initiated into the mysteries of mysticism, and practiced a life of prayerful meditation. Upon becoming enlightened, he taught others that the kingdom of heaven is within.

To Sevgin Oktay: I regret that Phil omitted the Muslim sacred texts and ask forgiveness for the exclusion. I know it does not help to point out that Phil also omitted other religious traditions and sacred texts. I can only say that he spent most of his time with the Christian texts and no small amount of time with the Hebrew texts. If he were still with us, he would have to confess that time (and association) did not afford him the privilege of studying the Muslim texts. The best lesson I can take from this is to put myself in the way of that study and to encourage others to do the same.

To Paul McKean Moore: Phil often spoke critically of the Catholic Church and was under no illusions as to its sanctity. He was wont to say, “The Church is a whore, but she is my mother.” I always understood that, in so saying, Phil was trying to stay in touch with his own roots (and, perhaps, his own corruptibility). It was his understanding that, in order to be going somewhere, one must have come from somewhere. He was rooted in the Church, but he cut his teeth on resistance to it even before he began to resist the state. As he grew and matured, his relationship to the Church became more and more marginal.

Phil also said that “we are the Church,” and for him that meant we had to embody the kind of church we longed for. For more than thirty years Phil lived simply in the intentional community of Jonah House, serving the outcasts of society, sharing their fate, and trying to relieve their bitterness. The Church has yet to embrace the life of poverty and resistance, but if we live it in such a way that it becomes attractive, perhaps the Church will catch up.

I can almost see Phil shaking his head at Moore’s description of Christ. We can only imagine what Christ’s life was like and how he acted; the details we have are few and limited. So perhaps it is right and just that we have different interpretations of those details.

In his rebuttal to Philip Berrigan’s criticism of the use of atomic weapons on civilian targets in World War II, D.C. Towne makes a gripping, but very old and discredited, argument [Correspondence, October 2003]. There were alternatives to dropping the Bomb on Hiroshima and Nagasaki. These included dropping it on a military target or, as a demonstration of what it could do, on an uninhabited site. A case has also been made that the Japanese government did not have time to respond to the first bomb before the second was dropped.

If we are to continue to mature as a nation and a people, we must accept and learn from our mistakes and strive to be more humane, especially in difficult times.

I read with interest Philip Berrigan’s “Dispatches from the Lamb’s War” [July 2003]. I was disappointed, however, that Berrigan did not cite Muslims as having a “sacred text . . . against which to measure life” — as do the Christians, Jews, Hindus, and Buddhists that he mentions.

Sevgin Oktay Poughkeepsie, New York
More Letters
What Do You Think? We love getting letters to the editor for our Correspondence section.
Has something we published moved you? Fired you up? Did we miss the mark?
Send A Letter

Home For The Heart Attack

Philip Berrigan On The Necessity Of Nonviolent Resistance