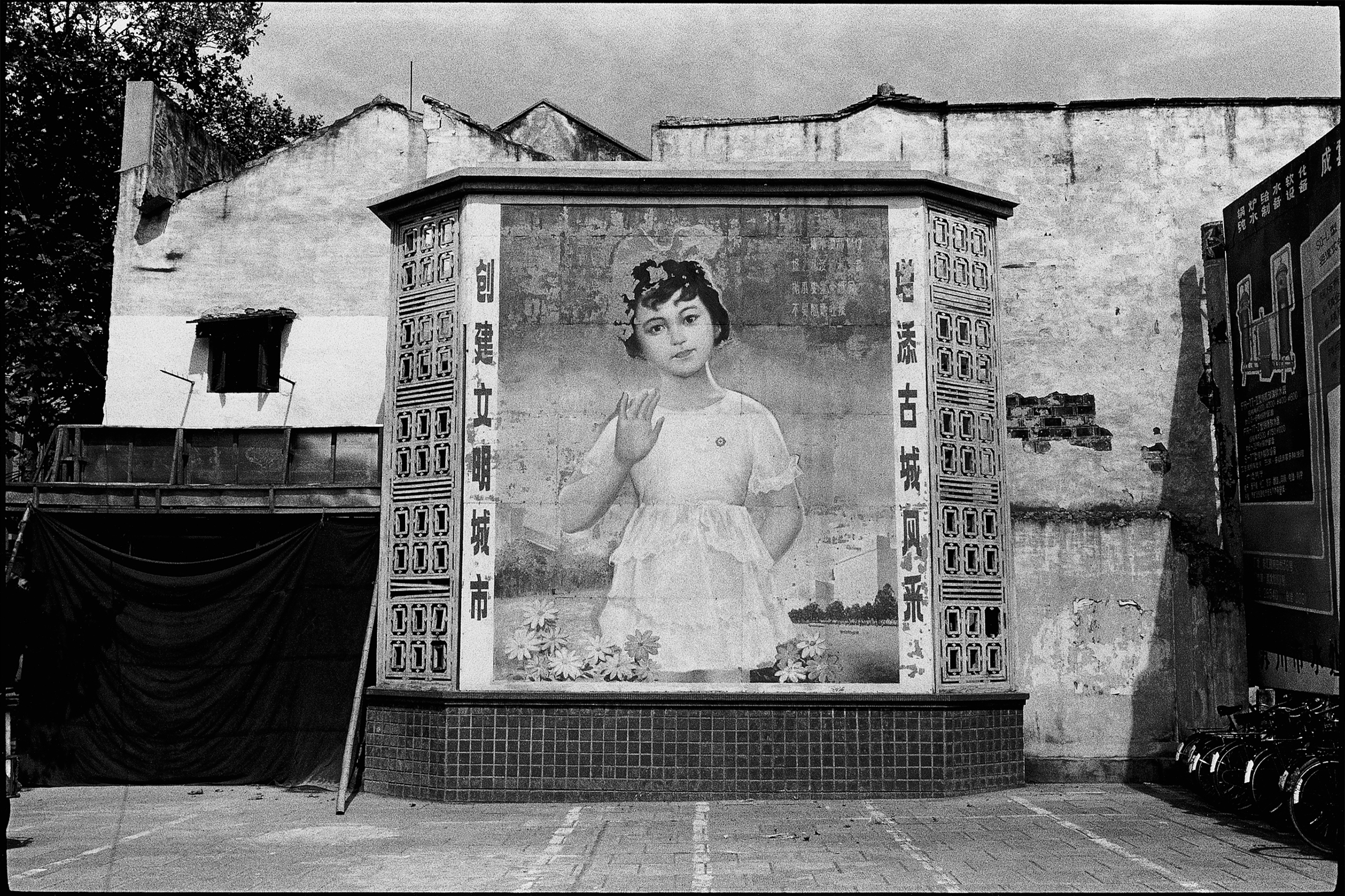 I’m not really all that comfortable with foreign people. I always catch myself being overly friendly, nicer than I really am, my nouns and verbs more carefully selected, doggedly enunciated, punctuated with tight smiles. And volume is a problem. I start high, and after fifteen minutes, I hear myself yelling. Words far too kind, in a fortissimo that wears everybody out.

Plus, I am always asking foreigners how much things cost, and how far a certain city is, and who’s related to whom and how, and do they feel uncomfortable in America. I call it that. “America,” I say, when what I mean is the U.S.

My young Cambodian friend Chay is at my house tonight with his young Chinese wife. We’re eating in the kitchen. I first met Chay when he was newly arrived from Thailand. During those early years I hired him often to do work in my garden and around the house. Yesterday I ran into Chay at Wal-Mart, where he now works — where I buy everything I buy, which isn’t all that much, even though I know in stultifying detail the five most compelling reasons why you’re supposed to spit at Wal-Mart when you drive by on your way to the overpriced, pretentious stores on Main Street, where, incidentally, everything is made by the same exploited, knurled, and calloused child-sized hands in the selfsame village in Romania.

That’s the problem. If you know anything at all, you cannot do a blessed thing without committing some vile injustice. Everything’s as evil as everything else; so the bottom line is: knowledge — or even vague awareness — can hogtie you.

I felt guilty when I ran into Chay. I was buying this soy milk that has sixty calories and nine grams of protein in a glass. No animals were killed in its procurement. A purchase devoid of any sin, or any that I knew of. But nonetheless, I felt greedily consumptive, with four liters in my basket. Foreigners always make me feel so American, a card-carrying member of the U.S. club. And club membership’s a tricky thing for me. I hardly ever fit. “You thrive on ostracism,” my sister told me once. I beamed. “It’s not a compliment,” she said. But I do try not to be part of any group I’m in. It’s not that hard. People are usually pretty happy to exclude me.

“When are you free?” I said to Chay, moving my scarf to cover a couple of cartons of the high-priced soy. “I’d love to meet your wife. I’d love to have you come for dinner.”

“I only on Saturday night do not work then,” he said, and smiled the way he always smiled when asked to prune the rose of Sharon closer to the trunk, or make perhaps finer distinctions between the weeds and asters in my flower bed.

“So come to dinner tomorrow night.” I spoke without thinking, guilt-propelled. A large measure of what I do each day is fueled by one brand of guilt or another. Without it, I probably would get very little done.

“Yes, to come there we would be happy,” Chay said to me, quite clearly oblivious to anything my shopping basket might contain.

So much for Buddha.

I almost never invite people over for a meal. I can’t cook.

Well, that’s one of the reasons.

During the day I called about twenty-five different people and said, I would so love to have you meet my young friend from Cambodia. He spent eleven years in a refugee camp in Thailand after the Khmer Rouge wiped out his family. He walked for thirteen weeks to get there. Last year he went back to Thailand and met and married the sweetest girl. I figured one of the twenty-five might respond to the guilt spur same as me, but no takers.

Even if people are free, they don’t like short notice. I understand. I mean, we need time to get used to the idea that we’ll be going to eat and talk and drink in someone else’s house. You can’t get used to an idea like that in fewer than three days. Plus, last-minute means that you’re an afterthought. It’s very complicated. That’s another reason I don’t entertain.

Also, there’s the part about nobody ever asking me. Though that makes sense. I’m single. I am a walking odd number. I was even for a while, and then I hired a lawyer and I went to court and they made me odd again.

I worried I’d have nothing to say to Chay and his new wife, Ling, that I would batter them with questions — loud, carefully pronounced, personal questions — driving them and me insane. I do have a history.

But the meal is nice. They eat and eat and eat. Something of a novelty in my experience. The wife is very good at silence, and I watch and think perhaps it is a thing that I might learn tonight, but not before I have exhausted them and me and all things living with every question I can think of.

Chay was carrying a flat plastic bag when he came in. So much more intriguing than a wine bottle, I think. If I ever get invited over to anybody’s house again, I intend to show up bearing something gift-wrapped and astonishing.

“So, what’s in the bag?” I finally ask the newlyweds. It’s that or “How old was your grandmother when her period started?” I think I’ve pretty much covered everything else.

“This is the photographs of our wedding, you know,” Chay says.

I take the proffered album. I’m fast approaching the age when I will be too old to look at wedding pictures. I can’t remember what it is that you’re supposed to see.

Ten minutes later I look up from the pages.

“This is the photographs of our wedding, you know.”

“Chay, Ling, these pictures are amazing.”

I turn my eyes back to the pages. Photos of the couple, and of the bride alone, image after image of a porcelain-skinned face, features delicate and lovely, an advertisement for grace, a snapshot of what God must have had in mind when he created Eve.

“I don’t understand,” I say. “In every photo there’s a different dress.”

“Costume.” Chay enunciates as if the word were in Khmer. “All day, from six in the morning until the afternoon, we change and change to a new costume.”

I look again. In some the bride’s black hair flows free, in some she wears it coiffed into a sixties beehive, and in others it hugs her scalp in deep-oiled sheen.

I look from the perfect bride to the young woman who has just eaten two pork chops and seven miniature helpings of canned corn. The acne on her face screams adolescence, her tiny teeth are tinted brown, her glasses ride low on her little nose. Her face is sweet. It is a face you would be happy to see every day for any number of decades in a row. The face in the photograph is not a person. People are not beautiful that way, not in real life.

I don’t even like photographs. I never look at them in magazines. I like things that are made up. But these — I cannot get enough of them. I could look at them all night.

“Where did you get these costumes?”

“But they are so rich. How much must that cost to do?”

“About one hundred or two hundred dollar, I think,” Chay says.

“Look,” I say, “other people need to see these pictures. We need to sell them to a magazine. Would you like that? Would your family, your parents, in Cambodia, would they mind?”

“They would I think be very happy.” Ling speaks her first full sentence of the evening.

We spend the next hour scanning the photos onto my computer. Chay and Ling stand behind me, polite, patient. They question nothing that I do. It’s that way with refugees. Everything we do is probably about as strange as everything else we do. Our actions so bizarre that nothing can be aberrant.

If this were some regular dinner party, people would be drinking coffee and talking about where they went on their vacation, and what they ate when they were there, and how it tasted, and just what they hope to eat and see and do when they next go away from here.

Chay and Ling are only where they are. I do not think they believe — or disbelieve — that I will sell these photographs to Harper’s Bazaar or Modern Bride for four thousand dollars, so they can buy a car and sleep an extra hour on the February mornings they now spend standing at bus stops on their way to one of the five jobs they work between them.

I went to the town office yesterday to pay a parking ticket, and a woman there was telling everyone that she was driving south on Route 89 in her Volvo, and a tractor-trailer truck she was passing veered straight over into her lane, and, going seventy miles an hour, she slammed on the brakes and steered her car onto the median, where for the past eleven weeks God had been piling up the snow that stopped her car. The driver of the tractor-trailer truck saw her veer, slammed on his brakes, and skidded across the median, across the for-that-instant-empty lane of oncoming traffic, and down the slight embankment to a rocky stop. They both got out and walked away.

Chay’s family, four generations — parents, children, cousins, aunts, and uncles — were massacred. Not one of them died before he suffered agony, and Chay crawled for thirteen weeks through dense jungles till he reached Thailand, where he waited, not impatiently, for eleven years before he was allowed to come to the U.S. Ling’s family escaped with their lives from China to Thailand, and she met Chay there. Chay applied — and was rejected, four years in a row — to bring Ling back here as his wife. “Wal-Mart pay too low,” he says.

And here they stand tonight, in my computer room, and watch me scan the only copies of the pictures of their wedding, and they do not, have not, nor will they ever, speak the words: I am alive.

And the lady with the Volvo, which she drove away in, stands in crowds of strangers in city offices saying, over and again: The trucker is alive, I am alive. And everybody there shakes their heads and says: Can you believe it.

I’m telling you about America. 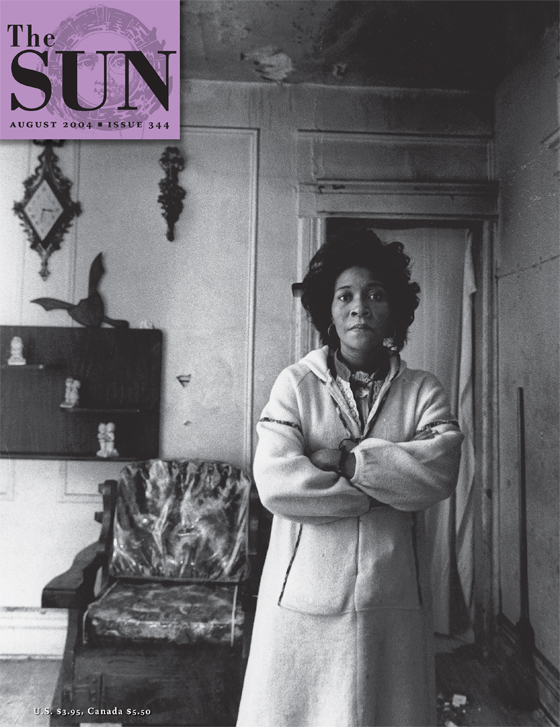