My hands are cold this morning. They’d rather be in bed with Norma than wrapped around this pen — but then the pen would be cold, and this page empty. Better an empty bed than an empty page, I tell myself, as if the gods will be impressed by my little sacrifice. I agree with Woody Allen that 80 percent of success is just showing up. But what about the other 20 percent? I sit here, waiting for inspiration to arrive. Sometimes she does, and sometimes she doesn’t. Sometimes she sleeps late and lets me struggle on my own.

Inspiration isn’t a candidate who tells me whatever I want to hear. Inspiration doesn’t offer a money-back guarantee. Inspiration won’t be hailed like a taxi at rush hour or sit around patiently while I return my calls. When I climbed out on the ledge and stood there trembling, Inspiration didn’t care whether I was bluffing or really meant it.

How much I got done yesterday. But it wasn’t enough to keep the ice caps from melting. It wasn’t enough to keep my president from lying. This morning, instead of getting up early, I turned off the alarm and dropped back to sleep like a stone. I rolled down the long hill of time — a stone without a name, without a briefcase, without a list of things to do. I rolled past all the words I’ve written and all the words I haven’t written; past all my dear friends who are still living and all my dearly departed friends who are still dead. I rolled past all my plans for a better tomorrow — back to a time before America was even a gleam in the eye of the Founding Fathers; back to a time before Western civilization heaved itself out of the water, stood up straight, and started making headlines.

“Learn to die every day,” the sages say. That’s hard to do, and so is writing: memorizing the alphabet; learning the ten thousand names for things; accepting that every sentence, no matter how glorious and full of promise at the beginning, ends.

Annie Dillard: “Write as if you were dying. At the same time, assume you write for an audience consisting solely of terminal patients. That is, after all, the case. What would you begin writing if you knew you would die soon? What could you say to a dying person that would not enrage by its triviality?”

I Couldn’t sleep last night. Too much coffee. Too much thunder and lightning. Norma loves thunderstorms, but I’m unable to sleep through them. I feel as if I’m being disrespectful to an angry Father: God pounding his fist on the table, the original shock and awe. So I got up and read manuscripts for a while, and struggled to decide whether to accept any of them, and probably stirred some bad dreams for writers who’d hoped for a different outcome. Since The Sun receives nearly a thousand submissions a month, I’ve had to learn numerous ways to say no, the way Eskimos have so many words for snow. I try to be kind, but there’s no denying the blast of Arctic air a writer must feel when she finds another rejection note in the mail. Maybe she’s used to this kind of weather by now, or maybe her mouth tightens and her eyes well up. I started The Sun in order to relieve, not create, suffering. But it’s impossible to publish the magazine without disappointing thousands of writers year after year. Then again, I remind myself, every yes in our lives rises from the ashes of innumerable nos: we move to this town, not that town; bring home the brown puppy from the pound, not the black one. Even the soldier surrounded by enemies raises his rifle and takes aim at just one. Finally I turned off the lamp and tried to get back to sleep, wondering whether a writer somewhere was dreaming of white envelopes falling from a winter sky. Which one would she open first? That, she thinks, is what she hates the most: having to decide.

An author whose work I’ve often published (and just as often rejected) writes: “My cousin might send you something and use my name. I told him that using my name wouldn’t make a particle of difference, because Jesus Christ himself could submit and you’d quibble about the ending.”

Have I learned to stop complaining and be grateful for everything? Not by a long shot. But I’m not complaining! I promise not to blame anyone tonight for the pain of living: not my wife for being out of town again, nor my mother for being dead twelve years; not the darkness for making it hard to see.

I rarely talk in my sleep, but in the middle of the night my voice woke me: “This is the Mystery,” it said. Then, more emphatically, “This is the Mystery.” And suddenly I was awake. And for a shimmering moment I understood: The Mystery isn’t waiting to reveal itself until after I become enlightened or, barring that unlikely possibility, after I die. The Mystery isn’t out there somewhere, millions of light-years away. Nor is it two feet to the left of me or two feet to the right. Then, this morning, I came across these words by Ramana Maharshi: “God’s grace is the beginning, the middle, and the end. When you pray for God’s grace, you are like someone standing neck deep in water and yet crying for water. It is like saying that someone neck deep in water feels thirsty or that a fish in water feels thirsty or that water feels thirsty.”

I was struck by the quote from Annie Dillard in Sy Safransky’s April 2006 “Notebook”: “What would you begin writing if you knew you would die soon? What could you say to a dying person that would not enrage by its triviality?”

I teach English at a community college and have been haunted lately by the illness of one of my young students. Mine is one of the classes he has not yet withdrawn from as he undergoes chemotherapy. This has nothing to do with my ability as an instructor; my class is a prerequisite he needs to take other courses at the college.

Nonetheless, his predicament makes me want to be a better instructor than I am. I want every class to result in foundation-shaking insights. I want to expose him to the full range of human emotions that literature dares to describe. I want . . . well, I want a lot of things, not the least of which would be a different diagnosis for him. In the meantime, I’m left feeling woefully inadequate, as though my classes are rife with exactly the sort of triviality my student would be justified in raging against. And then I remember, This isn’t about you, and I damn myself for having entertained the notion that it was, even for a moment.

Would that my student and I had more time. Would that I could be that sort of ideal instructor every day. Would that we all could be.

Tracy Lassiter Thatcher, Arizona
More Letters
Thank You Your donations helped to keep our ad-free, nonprofit magazine in circulation last year, funding everything from production to distribution. Learn how you made a difference last year. Learn More 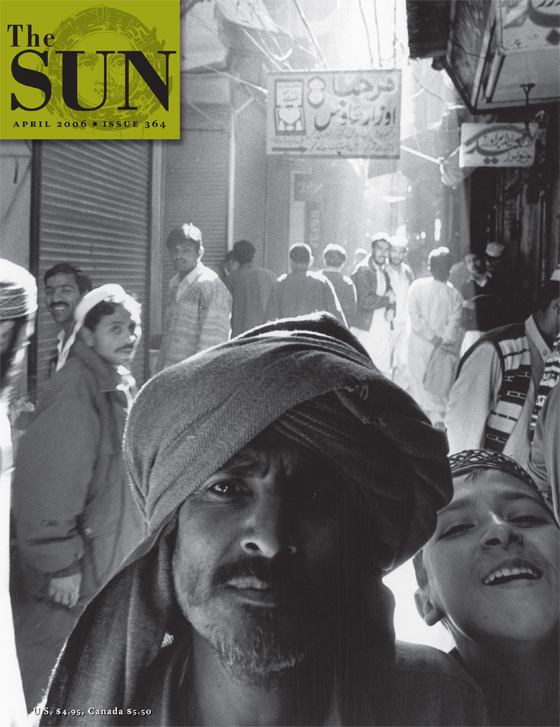 By Robert Bly
The Sun Interview