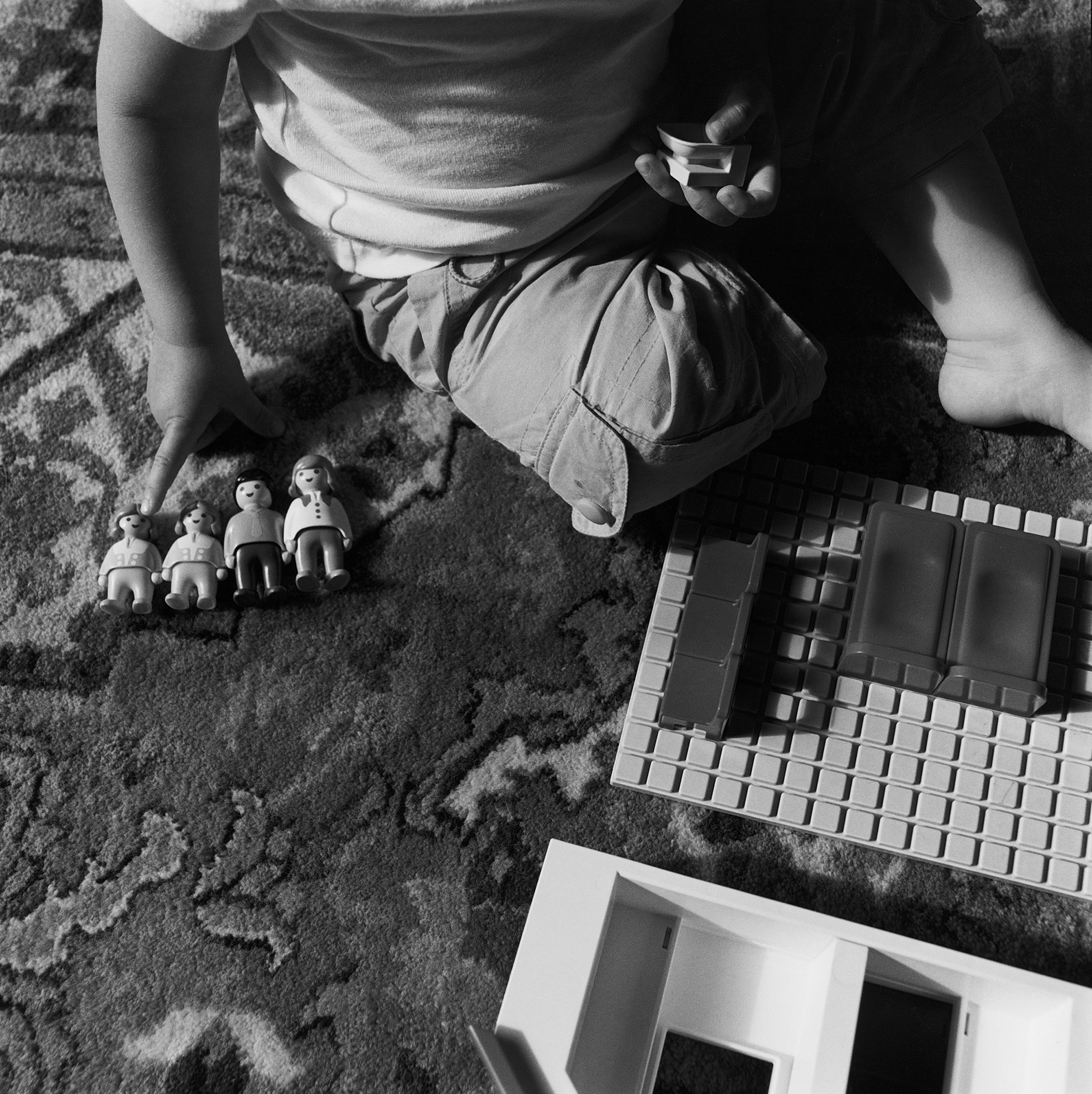 On Passover eve, April 1987, the jacaranda trees are only hinting at the cloud of lavender that will quietly explode on the sidewalks and streets of Los Angeles come June. The men I know hate jacarandas for the sticky nectar that drips on their cars; the women plant them anyway. To look down streets lined with purple jacarandas is to be transported into a technicolor dream sequence.

My husband, my son, and I are driving through the City of Dreams in a periwinkle haze on our way to the home of family friends, where my mother will ladle out matzo-ball soup and my father will officiate at a truncated Seder, the traditional holiday meal, as he has for the past thirty years. My son, Zack, age four, is adorable in a white turtleneck and navy sailor suit. He is in his usual good spirits, though his health has noticeably deteriorated. The shadows under his bright eyes are skim-milk blue, and he hasn’t been able to run since February. This has meant the end of his favorite game, in which he hurtles toward me, grinning, to be swept up in my arms and whirled around, shrieking with pleasure. The game always ends in a hug and then begins again.

This is the first Passover that Zack is old enough to understand what we are celebrating and why. On the drive from Hollywood to Santa Monica, I tell him the story about the Jewish mommy who saves her baby by putting him in a basket and floating it down the river. The baby is found among the reeds downstream by an Egyptian princess, who raises him in the Pharaoh’s palace. I explain that the Jewish people in the story are slaves, and after Moses grows up, he asks the Pharaoh to let his people go. (Here I give an abbreviated list of plagues, leaving in frogs, hail, and grasshoppers, definitely skipping the Angel of Death.) I describe how Moses leads his people out of Egypt, chased by the Pharaoh’s soldiers, and then I finish with the big Cecil B. DeMille scene: the parting of the Red Sea.

Zack listens intently, eyes wide below straight brown bangs. I wonder what my little boy will find most fascinating in this tale: The soldiers? The giant waves? The plague of frogs? Not Zack. He sighs and says, “Oh, Momma, I would love to find a little baby in a basket.”

I am silently thrilled to hear him say this. I have actually managed to buy a baby Moses three inches long, with a detailed, serious face, perfect little fists, and blue-and-white-striped bunting, just like the Israeli flag. It is nestled in a tiny basket, gift-wrapped and waiting for Zack, his prize for finding the afikomen, the matzo cracker that is hidden for young children to seek out.

After dinner, we give Zack “warmer” and “colder” clues until he finds the shard of cracker and brings it to his grandpa in the dining room. Then Zack unwraps his prize. “Oh, thank you! Thank you, Momma!” he cries. (He pronounces th as f, so it comes out “Fank you!”) He scoots around the table to show his grandma the baby Moses, and the moment of pure pleasure briefly dispels the sadness and fear that have taken up permanent residence in my chest. I have gotten it just right: the ideal gift for the occasion. My son plays with his baby happily for the rest of the night. For me the evening is a small but perfect gem of motherhood.

Unlike the Hebrew slaves in the Passover story, I could not stop the Angel of Death from slaying my firstborn, my only child. That Passover would be Zack’s last. He would be dead by Hanukkah from AIDS contracted from a blood transfusion, and it would be years before I could bring myself to attend a holiday celebration at the same home.

On Passover eve this April I rotate the memory of that evening in my mind like an amethyst crystal. Each facet reveals a different camera angle. First a long shot, looking through the windshield down the street, where purple petals will soon obliterate the blacktop. Then a close-up inside the car (was I in the back seat or the front?) at the joyous moment Zack tells me he wants the very thing I have gotten for him. Last, a wide shot of the dining room, my father in a blue velvet yarmulke, smiling beneath his white mustache, eyes crinkling with delight at my sailor-suited son, who, head at table height, happily shows everyone his baby Moses.

It is a rich memory, inseparable from the tastes of sweet Concord-grape wine, my mother’s delicate matzo balls floating in golden broth flecked with parsley, and chocolate-covered coconut macaroons. As I recall the aromas and textures of these foods, Passover 1987 blends seamlessly into decades of identical feasts. My first Seder, at age two, I know only from my parents’ stories: I became tipsy on a sip of sweet wine and stood in my chair to sing “Happy Birthday” when the candles were lit. A few years later it became my role in the ritual, as the youngest child, to ask the traditional four questions, the first of which is “Why is this night different from all other nights?” Like the food, the Passover story provided a reassuring continuity and sameness each year: a myth of liberation from thousands of years ago passed on to each successive generation of Jewish children. For me, my young son gave the Passover ritual its meaning. Without him, there is no one to whom I can pass on these stories. Is it enough just to remember?

Today I live on the north coast of California, where there are no lavender jacarandas, but I admire the purple bearded iris in our small courtyard garden. Its ruffled bodice and fluttering skirts remind me of costumes for the ballet. My love for this flower, whose blossom I have anticipated all winter, is made stronger by my awareness of its transience.

I remember a Passover in Dallas in 1990 — just three years after Zack’s last Passover, and shortly after my mother had died. I had flown to Texas to take part in a meeting of AIDS activists. My choices for how to spend the holiday were to sit alone in an anonymous airport-hotel room, to go to a Seder at the home of strangers (who had been asked to invite me), or to take a cab to a gay bar in the city with members of our group. Zack’s death, and my mother’s, were still fresh. I chose the Seder.

It was the first time I had met Jews with Texas accents. They thought I’d traveled merely from Los Angeles, but I’d come from a place much farther away: the land of AIDS, a place with a plague unimaginable even to Moses, from which there is no liberation nor escape.

I’d wondered at the meetings that day which of the handsome, articulate young men I was working with would be next. I was distressed and uneasy at dinner, though I smiled through the conversation and thanked my hosts graciously. We were all Jewish, but we had little in common. They belonged to the bright land of the living, breaking matzo for their young children to find. I was in the land of the dead, experiencing the world through the invisible, tattered veil of loss. I didn’t belong.

Although there are medicines now to control AIDS, the plague is still spreading. The Angel of Death is busy. Who knows what the next plague will be?

My husband (not Zack’s father, but a different husband) is away this Seder, and I sit alone with my memories at our empty table, smelling the yellow freesias he brought me before he left. The technicolor dreams I once had of children and family have faded. I miss Zack and my parents and the love that expressed itself through chopped liver, chicken soup with bobbing dumplings, and tiny dolls in baskets. I feel defined by loss, my shape delineated by the absence of those who used to surround me. The invisible membrane of love that held us together for so many years has become stretched, attenuated by time and space and death. But when I close my eyes and concentrate, I can still feel my son and my mother. Zack’s energy is brighter than the Seder candles. My mother’s, to my surprise, is no longer anxious, but as warm and soothing as her soup. I picture a huge bowl of that soup, a sea of broth. I see myself, smaller than baby Moses, climbing into a little matzo-ball boat and rowing with one of Grandma Anna’s big Russian spoons to the other side of the bowl. I clamber out onto a dazzling white damask shore, where Zack and his grandparents are waiting to embrace me.