My Iceland | By Sparrow | Issue 480 | The Sun Magazine
close 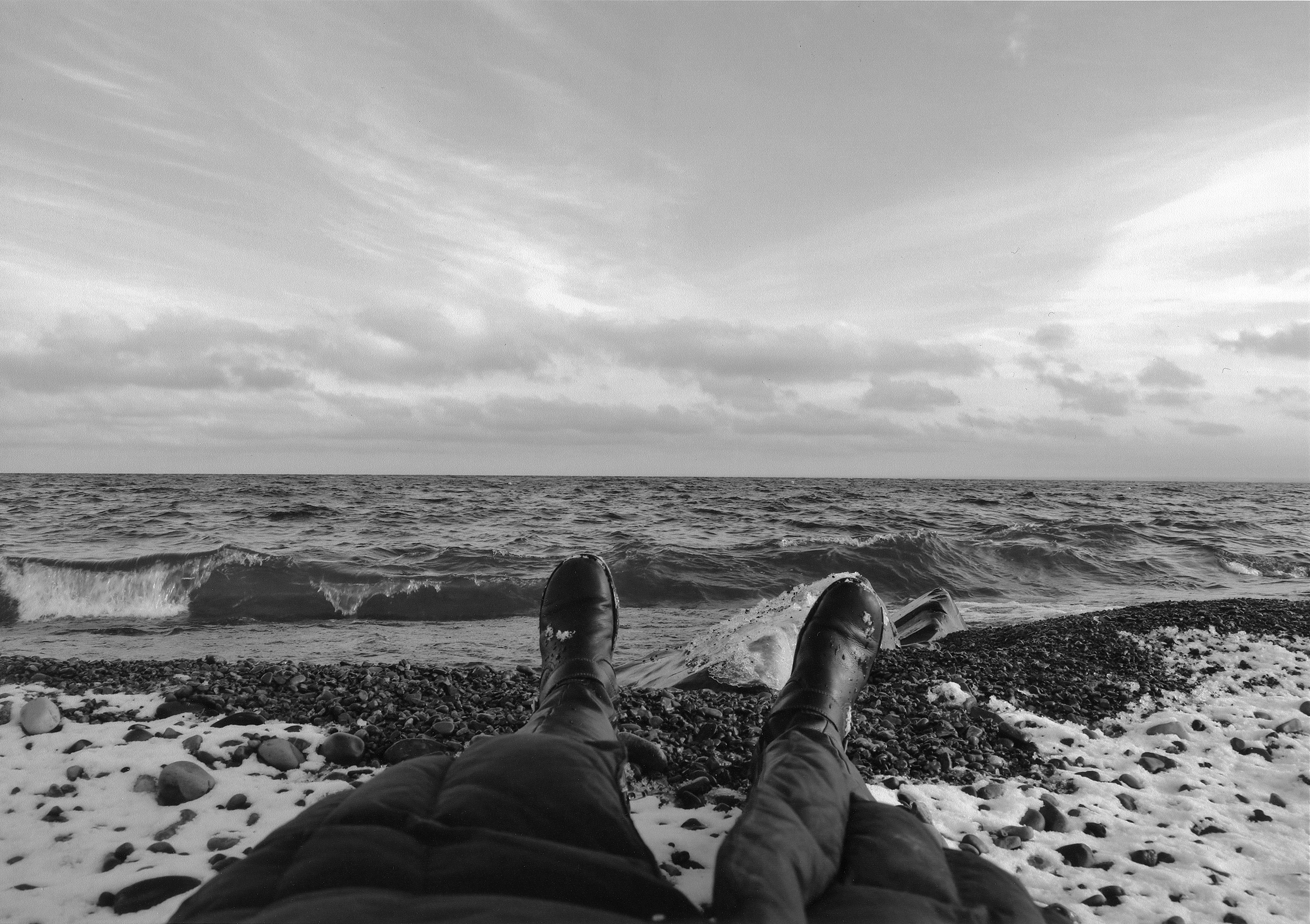 When my wife and I traveled to France to visit our daughter, the cheapest flight included a brief stopover in Iceland. Now I can’t get that eccentric island nation out of my mind.

The airline was Icelandair, and half the announcements over the plane’s intercom were in Icelandic, which sounds vaguely like English spoken backward. The flight attendants seemed free of anxiety and didn’t nag you about the seat belts the way American flight attendants do. The screen on the seat in front of me flashed information about Iceland: It has 130 volcanoes. Its national dish is cured shark. Its most popular restaurant is the hot-dog stand.

As we landed in the capital, Reykjavík, I gazed down at the cold, treeless, barren landscape. It was April 18, and the pilot announced that it would probably snow that day. My wife and I had one hour and forty-five minutes in Iceland.

Soon after exiting the plane, we entered a corridor that resembled a high-class prison. Inside a glass display case was a scale model of a Viking ship called the Íslendingur. Some of the windows were decorated with quotations from native poets. (“I believe in the life of the grasses and spring without end.” — Steinunn Sigurdardóttir) I imagined that certain eld­erly women gave me conspiratorial looks of ancient Icelandic wisdom. Besides a large and prominent bookstore, the central concourse of the airport was rather generic. I decided to go outside, into actual Iceland. Luckily I was carrying my winter coat.

Though it’s excruciatingly difficult to enter an airport, it’s wonderfully easy to escape from one. Suddenly I was outdoors and surprised to see ornamental spruces. I’d heard that there were no trees at all in Iceland. As I walked across the parking lot — so small it could be traversed in two minutes — the icy wind buffeted me, as if attempting to wrench my feet from the ground. This was no ordinary wind. It was distant and cold, smelling of glaciers and volcanoes. It felt like the first wind, the original wind. The entire landscape bristled attentively, as if listening. Does the wind ever get strong enough to lift you off the ground? Iceland might be a place where one could actually fly.

Returning to the airport, I noticed a man dressed as a chicken holding a bowl full of broken pieces of chocolate. No doubt this was the Icelandic Easter Chicken. (Easter was two days away.) I watched a child listlessly choose a treat. This is why one travels: to expand one’s worldview. In America children are taught that a giant bunny standing on two legs can somehow lay colored eggs. In Iceland it’s obvious that a six-foot-tall chicken can lay chocolate rectangles, then break them into pieces.

Before we boarded our connecting flight, my wife bought höfdingi hvítmygluostur, a soft white cheese. It was mild but with a slight bite, as if the cows that had produced the milk had been eating thorns.

Since our brief visit I have learned that the nation of Iceland contains only 320,000 people — less than some neighborhoods in New York City. It’s as if Harlem were a country. Iceland has one of the world’s most obscure currencies, and one of the world’s least-spoken languages.

And I found out that humans are occasionally taken aloft by the Icelandic wind: While shooting Beowulf & Grendel in a remote corner of his native Iceland, director Sturla Gunnarsson and his crew were hit by winds of 120 kilometers an hour. Assistant director Wendy Ord was a small woman, weighing little more than a hundred pounds. “Several times she was lifted up by wind and blown away,” Gunnarsson recalls.

The editor of Atlantica, one of the tourist magazines I picked up at the airport, writes of Iceland’s “still-unspoiled nature, . . . the fresh wind and the horizontal rain.” Horizontal rain? Too bad I missed that!

Some early settlers in Iceland were Irish monks, who sensed in those desolate plains the nearness of God. The most famous Icelander today is the singer Björk. In her gyrating indie-rock music, I hear echoes of that ancient wind.

Recently, in the courtyard of the Jim Kempner gallery in Manhattan, I saw Yoko Ono’s Wish Tree: a Japanese maple covered with hundreds of white paper tags attached by strings. On a shelf were more tags and some sharpened pencils. A sign explained that one should write a wish upon a tag and tie it to the tree. I thought for a while, then wrote: “The New York Times will fall in love” — and added my note to the other anonymous wishes. Later I learned that Yoko buries the slips of paper in capsules at the base of the Imagine Peace Tower in Iceland, a memorial to her late husband, John Lennon. A photo of it shows a cylinder projecting blue light straight up into the night sky: a tower of light. The Peace Tower is on an island off the coast of Reykjavík; I must have flown right over it. And now one of my sentences is destined to be forever buried there, beneath the stabbing wind and horizontal rain.

Yoko was born in 1933, in Tokyo, Japan. When she was a child, her nation fell under the spell of fascism. The Japanese army began a brutal campaign through China and into the Pacific Islands. Yoko grew up amid this madness. Then she moved to New York City in the 1950s and watched as the U.S. was swallowed up in the tragic war in Vietnam, which left 3 million dead. Yoko sang, along with her husband: “All we are saying / is give peace a chance.”

Cultures grow up like children, but much more slowly. Twelve hundred years ago Vikings pillaged the coastline of Europe, their swords and battle-axes dripping with blood. Today their Icelandic descendants have no army. The 2015 Global Peace Index named Iceland the most peaceful country on earth. Instead of war Icelanders pursue the gentle arts of cheese-making and indie rock. I hope one day our nation abandons its imperial ambitions and builds a tower to peace.

When Words Are Scarce