We are at a parade. It is Memorial Day. I am sitting on the curb in front of the church with my brother, reserving our family’s spot. The rest of the family is coming along slowly, our father carrying the baby, but my brother and I have run ahead because we don’t want to miss a single soldier in uniform or girl twirling a baton or bespectacled beaming cherubic man wearing a fez. We might see an elephant. We will see horses and firetrucks. We will see politicians in convertibles. We will see men older than our dad wearing their Army uniforms. Army is green and the others are blue. Our dad will not walk in the parade wearing his uniform. He declines politely every year when he is asked. He says he no longer has his uniform. He says he does not know where it went, although we think he does know where it went. He says he wore it only because the job had to be done, and now that the war is over, there is no reason to have a uniform. He says uniforms are dangerous statements, if you think about it. He says uniforms can easily confer false authority, and encourage hollow bravado, and augment unfortunate inclinations, and exacerbate violent predilections. This is how he talks. He says uniforms are public pronouncements, like parades, and we should be careful about what we say in public. He says we should be leery of men marching in uniforms. He says no one has more respect for members of the armed forces than he does, but that it would be a better world if no one ever had to take up arms, and that is a fact. He says in his experience it is the man who has been in a war who understands that war is cruel and foolish and sinful, and anyone who defends war as natural to the human condition is a person of stunted imagination. He says a study of history shows not only that we are a savage species but that we are a species capable of extraordinary imaginative leaps. He says that someday we might devise ways to outwit violence, as Mr. Mohandas Gandhi tried to do. He says most wars, maybe all wars, are about money in the end, and that when we hear the beating of war drums, we should suspect that it is really a call for market expansion. He says war is a virus and imagination is the cure.

Our father does not have his uniform anymore, but he does have a wooden box in a drawer in his bureau at home. There are medals and service bars and ribbons in the box. We have secretly opened the box, my brother and I, and handled its contents, and put them back exactly the way we found them, so that he would not know, but he knows. His photographs are in another drawer. In them he is tall and thin and shockingly young. He is a private, a sergeant, a lieutenant. He is on Bougainville Island in the South Pacific. Then he is in the Philippines. He is preparing for the invasion of Japan. He is preparing to die.

Today he is standing next to us at the Memorial Day parade as the soldiers and sailors pass by. Some men in the crowd salute, but he does not. He keeps his eyes locked on the soldiers, though, even as we are pulling at his hands and pant legs and the baby is crying and wriggling. The one time he hands off the baby and applauds quietly is when the firemen pass by in their trucks. After the firemen come the Girl Scouts and Boy Scouts, and the Little League baseball players, and the Knights of Columbus, and the Rotary Club, and finally a visiting fife-and-drum corps from Ireland, and then we walk home, our dad carrying the baby, who fell asleep just after the Girl Scouts walked by. 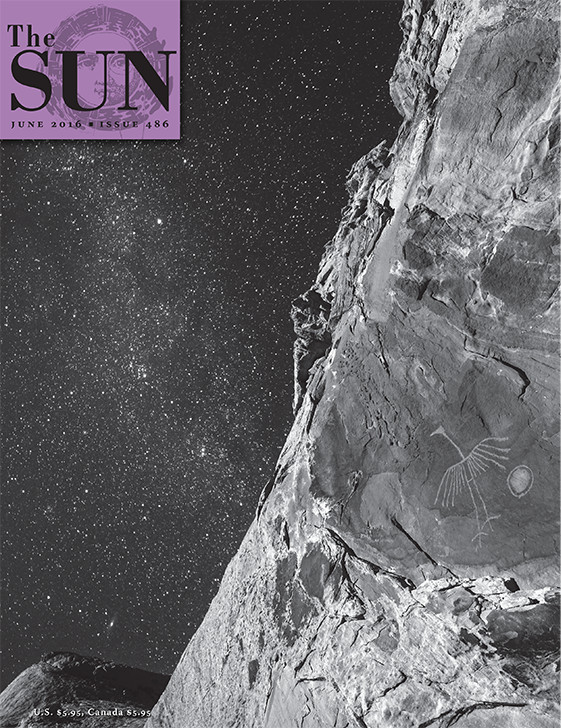 By Poe Ballantine
The Sun Interview

The Skeleton Gets Up And Walks

Craig Childs On How The World Is Always Ending