The Sun Is Saluted On National Public Radio

The cards and letters asking for subscription information have been arriving daily since National Public Radio’s Daniel Lusk broadcast these kind words about THE SUN on his “Off the Wall” show in mid-September. Thanks, Daniel.

This is Daniel Lusk, Off the Wall. Try to imagine what it would be like to actually stick your head in the sand. Aside from the warm and cozy obliviousness of it, the sort of gritty tropical sensations against your eyelids and temples, I think it would be very claustrophobic.

Think of it! While you are thus engaged, the earth palming your cranium like a basketball, all around your body (now disguised as a trick croquet wicket) the things you’ve always dreamed of may be happening: those footsteps are a dancing bear (the circus is passing). Or The Millionaire is coming to your door with his magnanimous envelope. Now he is going sadly away again. The phone is ringing and someone wants to award you an honorary degree. And a loudspeaker on a passing car is announcing the arrival of a Messiah.

But now you put your hands across your peachy derriere, suddenly very much aware how easy it would be for someone with a quirt (riding whip). Yes! Why do I think it’s only good things I may miss all hidden this way with my noggin ostracized? Is it because what I don’t know won’t hurt me? But what we don’t know can hurt us, can’t it?

For instance, here are two facts. One of them is bland and remote and what difference does it make whether we know it or not. The other is laden with portent. “The whole of human civilization is hardly 10,000 years old.” “The half-life of Plutonium 239, just one component of the (nuclear) wastes, is 24,400 years.”

But ah, I think. I’ll worry about that one when the time comes, hopefully much later. Well then, how about a more intimate fact: “I have cancer . . . the medical report is that the cells are a fast-growing and invasive kind.”

The first two statements were made by Nobel Prize Winner George Wald. The last, by Peg Staley. I read them both in recent issues of a periodical called THE SUN: A Magazine of Ideas.

Wald is talking about nuclear energy, America, and survival. He notes that “the bomb that wiped out Hiroshima and killed 140,000 people by the end of the year . . . that bomb would be too small to count in the Strategic Arms Limitation Talks.”

Wait, stay away from that sand. George Wald is not the latest in a long line of doom-sayers. He goes on to say that “we right now know quite enough to . . . begin to cope with . . . all those life-threatening problems. But there isn’t one of them that we can begin to cope with while maximizing profits.”

And Mrs. Staley, writing letters to her friends after finding she had breast cancer, has bravely permitted her struggle to be public for the benefit of all of us. She says in those letters: “Fear keeps me from trusting my capacity to heal myself. And my body knows it.” And in another letter: “I provided a perfect seedbed for cancer by long time neglect of some basic rules of good health and by ignoring signals of stress in my life.”

Beside these lead articles which provide THE SUN’s readers with important windows to common concerns, THE SUN has a segment each issue in which are printed letters from readers writing about some specific thing they’ve struggled with, like jobs, the family, drugs.

The magazine also publishes interviews, feature stories, fantasy, poetry, fiction. Issue 42 had an article on getting out of prison. No. 43 printed an interview with stress researcher Ken Pelletier in which he suggests ways to break a chronic stress pattern.

Issue 44, with the George Wald on nuclear energy piece, also has a bright little piece by David Manning titled, “Tales from Analogue Number One.” Which begins: “One day a fool left his paradise and set out to find himself.” The fool tries falling in love, tries getting a job, he tries disguising himself as a tree . . . I think I understood that story.

And No. 45 of THE SUN which has part II of Peg Staley’s correspondence about battling cancer, publishes an excerpt from Ron Jones’ book (There Is No School on the Sixth Floor) about an interesting experiment in trying to reorient psychiatric patients to the ‘real world’ by putting them together with city street kids.

Don’t look for THE SUN’s poetry or fiction to be grand. The letters from readers grousing about the insanity of industry and the outrage of funeral costs and the plight of turtles during migration are much more heartening to read.

So. Here is a orderly but unpredictable, inexpensive, little magazine, printed on good newsprint, that seems devoted to airing people’s opinions and experiences of the world we all share. 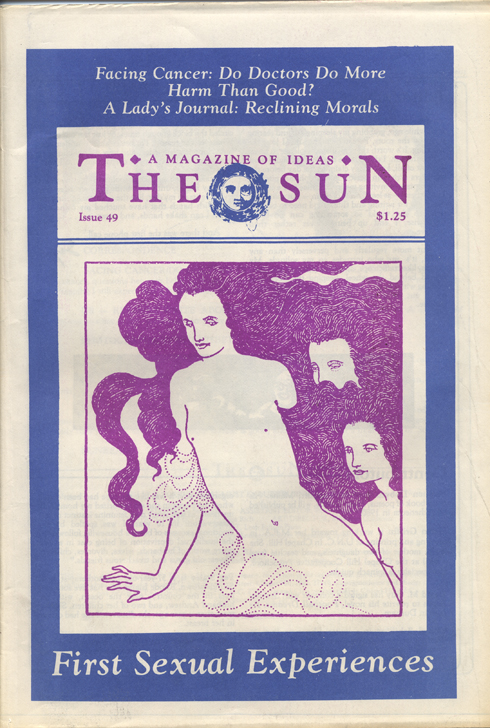