Good news: Jim Thornton, whose cartoons were first published in THE SUN, has been discovered by CoEvolution Quarterly, which will print some of his work soon.

Bad news: Jim is lonely, as this poignant letter, to SUN Assistant Editor Elizabeth Campbell and myself, demonstrates. In the sexual revolution, Jim seems to be on the losing side (whichever one that is). I wouldn’t bet on Jim’s chances to win S.’s heart, but maybe someone else will step forward? Maybe someone will step in front of a truck?

I have just returned to the great grogginess capital of the universe and thought I would type you all a quick line. I pray that I am accepted at a good school — this Florida living is pretty lousy — the statements technically should be unrelated but the typewriter has an intoxicating effect upon the novitiate typist, not unlike the voice of a soothing therapist beseeching free association.

Let me quickly make the request that prompted at least part of this letter. I am exceedingly hard-up as far as life goes. I find myself degenerating into a sexually frustrated variant on the Ancient Mariner — accosting strangers with my sad, penetrating eyes (a form of sublimation) and telling them the serpentine narrative of a eunuch who would be a stud. It is an altogether pathetic state to be in, one which robs me of all dignity, until it seems as if a gorilla masturbating in front of peanut hurling school children has more claim to self-respect than I. Ah, but there is a consolation — who among us, if such extrinsically enforced abstinence were to be thrust upon them, would last even as long as I have before succumbing to the sleazy gibe? At least my gibes are sort of funny, sort of.

Here’s the plan, fellow life-loving members of the optimists club; we will let S. on the ground floor of an enchanting possibility — we will let her have every girl’s dream of a winter vacation in sunny wonderful Citricacidophilus, where people can (and often do) live well into their fourth century. And will she have to spend her holiday in Citricacidophilus on the wing of some rich old male harpy who talks of nothing but the way the Exchange was in Krakow before the great one? No, indeed not! She can cling with all her heart, mind and well exercised vaginal muscles to one of the most interesting humans in Florida. I want you to arrange in whatever way you can (verbal persuasion, inducement of cult-like thinking, or money — you may liquidate a full 5% of your loan if you can pull this off) for S. to come down and live with me in some non-marital yet vaguely nuptial arrangement in my small bed.

I was wondering if you might act as my agents in this, since to reveal this desire directly to S. might fail to incline her heart as favorably as a more gamesmanship approach. After all, it’s very rare to find a girl willing to go back into the closet even with a guy of my ridiculously obvious attributes. (I know, for instance, several ways to touch girls, and I know a little practiced technique from France on how to kiss a girl with, of all things, your tongue. The latter is a bit disgusting at first, but the liberal-minded guy can quickly acquire a taste for this Continental practice.)

I am trying to be serious now; I hope that perhaps you can read between the lines, noting with little irony that my alleged “misogyny” is nothing more than the defensive babyishness/Nietzschean resentment of the prisoner in solitary confinement. . . . If it has occurred to you in a twinkling moment of Zen insight — the grasshopper has an exoskeleton, therefore he builds his own prison — I can only say, Knock it off you goofballs. Let S.’s ilk succumb to insipid Laing-isms, but at least the rest of us can try to be adults.

Okay, okay, you need proof that I can straighten up and act like a normal guy before you can encourage (in good conscience) the genuinely lovely S. to come visit me, on the gossamer wings of a succubus. After all, it has been rumored that I have, in my Sears shed out in back of the duplex, a McCullough chain saw, and there aren’t even any trees on my property. (This is true; I use the saw to remove palmetto bugs that can’t fit out the front door.)

Here I go — S., you have the most beautiful eyes I have ever seen, with the possible exception of the glass ones I saw once in the head of an electric cow.

But enough — relationships based on such sweet talk invariably falter once the loving pair has waltzed its way through Roget’s.

In utter seriousness, now, do you think you might approach S. with the possibility of living with me in Florida for a few months, a few weeks, or a half-hour in a rented room? Perhaps she has her own life now, I mean it’s possible, I suppose. . . . Well then, why not let her choose for herself. I request that you first try to convince her yourselves, and if this does not quite win her heart, please give her my address, and tell her how desperately I would like to start up intercourse with her. If in the off chance that she sincerely can’t come through as far as the ultimate goal is concerned, then please, let’s not give up all hope. The weather in N.C., I am sure, has begun to fester by now. Some comely tart of your acquaintance must be willing to surrender a little of the sociobiological dogma which foists coyness upon the feminine gender, especially when confronted by anonymous shlemiels with a predilection for insulting, anti-feminist jokes involving chain saws. Perhaps we might print up some tasteful little announcement in the next SUN — perhaps tacking it on a subscription advertisement. Obviously, this whole thing has come off wrong, I suspect you might find my sincerity suspect. Ah how the Jokester must always straddle the piano wire which separates giggles from the beating of dead horses. . . .

Please try to do something for me, and I will in return try to someday do something for you two self-actualized fortresses of laid-back, wholesome, Yogurt alchemized protoplasm. Just exactly what this might be, I have no idea . . . perhaps I could dedicate a cartoon to you. (With my luck, it would be one that brings obscenity trials back into vogue again.)

Thanks again, and I look forward to a prompt reply concerning this matter, as well as anything of interest to you outside the realm of my current (and embarrassing) obsession.

P.S. Eureka! I have, upon rereading this, had a secondary brainstorm. Why not simply change S.’s name to “any cute nympho-reader of the SUN with a zest for adventure,” and print the whole damn letter! I’m sure some readers might find it stimulating (funny? disgusting? offensive?), and who knows, it might be my salvation. You can title it, “Jim Thornton’s open plea to stave off his own genetic extinction.” You might even preface it with a page or two of praise for me, so that the “prospects” might be cajoled into attraction! 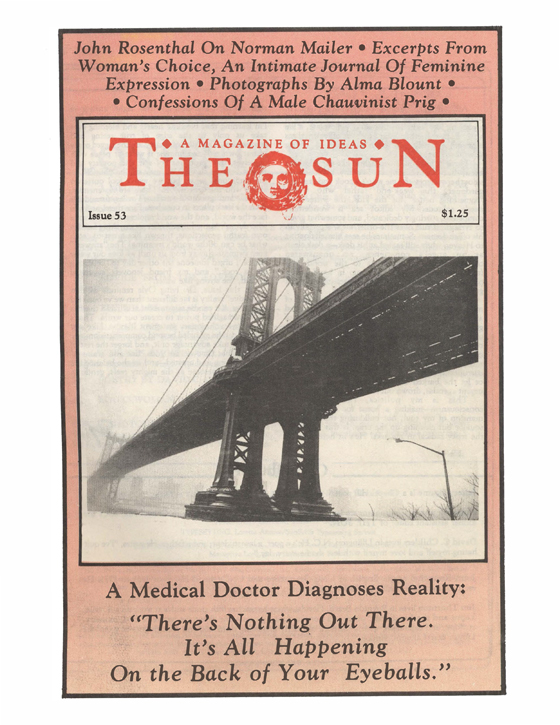 My Favorite Book(s)‚ And Why

In A Room Of Night

“There’s Nothing Out There. It’s All Happening On The Back Of Your Eyeballs.”