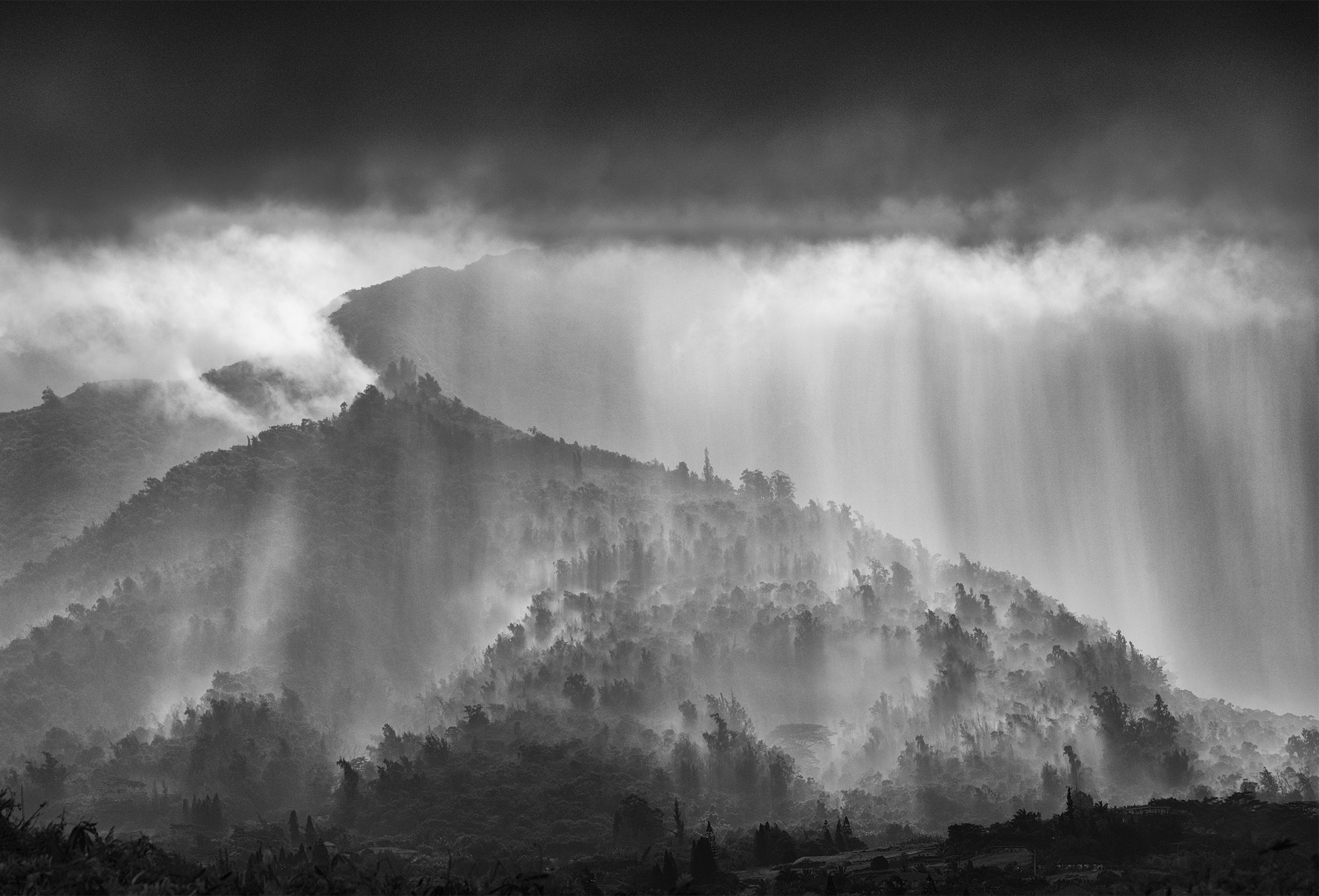 Ohashi Bridge In The Rain

When we met for lunch, she wore a dark silk dress and red lipstick. At the school where we both taught, she always dressed practically: plastic boots, a raincoat over a faded blue sweatshirt, a white sailor’s cap.

Ito-sensei’s energy astonished me. We often met at the bus stop near our houses in Matsumoto and rode to Meizen Junior High together. Sometimes, as I approached the bus stop from a distance, I’d see her in her sailor’s cap and mistake her, a woman in her seventies, for a young boy.

I had invited her to lunch to thank her for taking me to the doctor the month before. I’d had what I believed was bronchitis, and Ito-sensei — worried I would not be able to translate my symptoms properly to a Japanese doctor — had accompanied me. I’d left the doctor’s office not with antibiotics or cough syrup but with suppositories. The nurse, dressed in a lab coat the color of Pepto-Bismol, gestured to show me how suppositories work. None of that was Ito-sensei’s fault.

We met at a restaurant overlooking the Matsumoto River, ordered cold soba served on bamboo trays, and talked in an unhurried way, which was never the case at school. I’d heard from the other teachers that Ito-sensei came from a well-to-do family in Tokyo, and her education reflected that. Her English was formal, almost courtly at times, the most fluent of anyone I’d met in Japan, which suggested serious study over many years.

“In what way were you educated?” she might say.

Or: “Given the changes in Japan, many young women are delaying marriage.”

Or: “The children at Meizen have good hearts, but sometimes they lack good manners.”

She impressed me — more so each week as I failed in paltry attempts to grasp the most basic Japanese phrases.

At lunch I learned about Ito-sensei’s personal life: how she had been married and lived in Tokyo and had a son; how the family had moved to Matsumoto and her husband had died when their son was still young; how she had begun teaching English to support her boy, never having the luxury of staying home with him, as so many Japanese wives did.

As she talked, I thought about the Ito-sensei I knew at school. The students didn’t appreciate her impressive fluency in English and treated her as if her breath smelled of mothballs, which it sometimes did. I thought of how frustrated I got sometimes teaching alongside her and having to deal with unruly kids. Once, when our eighth-graders roamed the classroom and refused to sit still, I’d screamed at them. I must have looked like a crazy person: red-faced, yelling in an incomprehensible language, as if speaking a demonic tongue. The students froze and went silent. We all turned to Ito-sensei, assuming she would translate my words, as she always did when we cotaught, but Ito-sensei looked as shocked as our students. I knew just enough Japanese to understand the gist of her translation when it finally came: “Marilyn-sensei would like you to be quiet, please, and to do your best, please.”

I’d never seen Ito-sensei lose her temper at school. Or speak ill of anyone. Or refuse to do me a favor. She would stay up late every night for a week to translate something for me. This, of course, is what the students could sense: how full of self-sacrifice she could be. I, too, resented it sometimes.

Now I felt guilt for my resentment.

After finishing our soba, we lingered in the restaurant, watching the afternoon light hit the river in flashes, then travel on its way. I asked Ito-sensei about her husband and what he’d been like.

She told me he was an honest man. When he was diagnosed with cancer, his final wish was to return to Matsumoto, where he’d grown up, and to see the mountains, known as the Japanese Alps, one last time.

He did, she said. They set up a bed facing the window. He saw the mountains he’d known as a child, and then, a few days later, he died.

Ito-sensei cried as she told me this. Not pretty tears, either. Large, sloppy, gushing tears that came all at once. I felt a rush of shame for having asked her such a personal question; for poking carelessly at a wound that remained open.

At the same time there was also this: for a split second, as she cried, I felt I could see Ito-sensei living out all her lives at once. First as a young girl in Tokyo, studying hard, so smart, her distinguished father’s pride and joy. Then as a young woman, meeting an intelligent young man her family had arranged for her to marry, someone who perhaps surprised her by being taller and more handsome than she’d dared to hope. Then as a nervous mother, holding her new son to her breast for the first time, hoping he’d latch on. Then as a widow in her husband’s hometown, not hers, among mountains that made our human lives seem very small.

After my first year in Japan, Ito-sensei and I saw less of each other, as I needed her help less and less. I grew more comfortable in my Japanese apartment, more at ease teaching. I did not need her to take me to the doctor, because I’d become adept at fending off winter colds by taking hot baths before bed. I stopped asking her to translate for me, having learned just enough Japanese phrases to manage at the dry cleaner and the grocery store. I became immersed in karate classes during the week and made friends with other American expatriates at Scotty’s, a bar in town. I met a Japanese woman named Chieko, a teacher at a local high school who was in her thirties, like me, and wanted to travel to the United States. When I needed help, I turned to Chieko.

The obligation I felt toward Ito-sensei wasn’t enough for a real friendship to flourish.

That’s one way to describe what happened. Another is to say that ours was a story of youth’s indifference to elders — that ruthless old plot.

Still, I taught alongside her for the three years I lived in Japan, and we graded students’ vocabulary lists, and sometimes I’d watch Ito-sensei after teachers’ meetings, as we all drank our afternoon tea. Her face was lined, her fingers bent. She held her teacup with delicate precision, as I imagined she had as a young woman years before. During cleaning hour, too, I watched her from a distance as she worked in the school garden alongside our students. She’d bend to pull weeds and come up smiling, her hands covered in dirt. There was something exhilarating about seeing a woman her age surrounded by young people, engaged in practical work, and never — not once — complaining.

What do we really know of a country we visit? What do we know of a coworker? A neighbor? The man in the office across the hall who recently cut his hair? The woman we sit next to on the train who writes in a small red notebook? The tenant in our apartment building who always goes back and checks the front door to make sure it’s locked? The figure in the distance who brushes a loose strand of hair from her face?

I write this from an Iowa City coffee shop where I spent many afternoons years ago. It looks the same as it did then: dark blue-gray walls; young people from the university studying; and people like me, not so young, lingering.

Outside the coffee shop, a hard June rain.

Suddenly I remember something: a stray moment from last year, in California, where I teach at a small college. The moment catches me off guard.

I had lightly sprained my left ankle and walked slowly that day. After class a student walked with me to my office, where we planned to discuss her latest essay. She was young. She was in a hurry. She did not slow down to walk beside me. She stayed a few feet ahead.

Why do I remember that now? The small humiliation of it?

My father died two years ago and was buried on a hot August day. My mother died nine months later. We buried her on a cold and rainy day in May. For my father’s funeral, thankfully, I did not have to speak. He’d had a distinguished career in academic medicine, and his colleagues provided the eulogies. For my mother’s memorial service, however, there were no colleagues. She’d been a stay-at-home mother. Who was there to offer eulogies but a friend, a niece, a daughter?

I wore a jacket and trousers and practical shoes, suitable for walking across the large expanse of grass to the brief graveside service. If my mother had been alive, I would have worn a dress, though she probably would have advised me to “wear what’s comfortable.” My sister wore a dress and open-toed summer shoes. She said afterward that she’d been colder than she could ever remember being.

As we walked to the grave site, rain fell hard enough to shroud our view of the mountains to the east. Later, when I thought of that day — one to be endured more than held in memory — the scene reminded me of Hiroshige’s famous woodcut of Ohashi Bridge in the rain: the way hard lines of rain fill up the space, rendering the figures of people walking across the bridge small and anonymous.

There’s an image I keep of Ito-sensei. If the image is overly sentimental, so be it. That is no longer a concern of mine.

She is waiting for the bus. She wears her raincoat and rubber boots and sailor’s cap. She carries an umbrella, too. On this rainy day another bus — not ours — splashes through a huge puddle in the street. The water hits Ito-sensei like a giant wave in her face. She is surprised, as am I, standing behind her. But instead of getting mad, she laughs at the bad luck of an ordinary day. And in this moment she forgets that the custom for a polite Japanese woman is to cover her mouth. She laughs open-mouthed, teeth exposed. She is soaked from head to toe and laughing as she wipes water from her beautifully lined face.

I remember the first time I met her: She came to my brand-new apartment in Matsumoto and stood at the door, holding a gift — a box of small cakes. She introduced herself. She told me her full name: Ito Ai. She told me that ai means “love” in Japanese.

She looked down as she said, “This is how you can remember.”

He Arrived In A Hollowed-Out Studebaker Lark