I met someone a few days ago who was starting his own magazine — of songs, written in his own hand, called The Time Has Come For Cherished Pain. He was collating the pages at the quick-copy shop, still unsure what to charge for it. “Fifty cents?” he suggested uncertainly. Having just paid myself, I magnanimously handed him a dollar, took his first copy and wished him well. “This is how I got started,” I told him.

How far have I come? In the ten years since I sold the first crudely printed SUNs on Franklin Street, I’ve taken giant strides toward realizing my own “dream”; and I’ve wandered in circles, lost in a dream of cherished pain; and I’ve learned to pinch myself when I’m dreaming — that’s a different kind of pain, but waking up is never easy. Maybe THE SUN helps us to wake up — not with shrill alarm, or with “news” that is pitifully old, but with some light coming toward us, too much for closed eyes to ignore. It’s not an easy magazine, notwithstanding the spiritual platitudes that sometimes light it up fluorescent. Its heart has a different glow, of truths that can withstand terrible heat because in terrible heat they were forged. The heart of the sun is a nuclear furnace where distinctions between “matter” and “energy” break down; it’s too bright to look at directly — but its light illumines our lives. A powerful metaphor to live up to.

Metaphor. My true love. But are my metaphors mirrors or windows? Is THE SUN just me staring back at me? Sometimes, alone here, I wonder­ — about my presumptions, my dress-up games, my “magazine of ideas,” the ego’s insatiable sweet tooth: is it just another ice cream cone?

But there’s love here — because of, and in spite of, me. There are others, there’s you — seeing the world through other windows, seeing yourself in a different mirror. And here we are, together. I am forever amazed!

These “editor’s notes,” I’m told, are wonderful. I’m also told they’re irrelevant, self-indulgent. Shall I be awfully self-indulgent this month, drunk with myself on the eve of our tenth anniversary, tell you I once lived here, on Rosemary Street, lifetimes ago, an Indian, in a tee-pee? I saw it clearly once; the past and future collapsed, the moment flew like an arrow toward its mark. My strange cry tore the Heavens at the coming of the white man, with his printing press, his lies.

And I lived here more recently — “for real,” you might say — in 1978 and 1979, after my marriage ended, a bitter end to my lie of fidelity. For a while I lived here with a rat, which scratched inside the walls at night, ignoring my pleas that it leave so I wouldn’t have to kill it. I had to kill it.

I’ve made love in all the rooms here, on the cut-velvet sofa with the old straw weeping out the bottom, on the ink-stained floor, in all the rooms of my mind, with heart open and heart closed, my body sword and feather — acts of passion which made no more “sense” than the passion for making this magazine; how close the passions run, yearnings we name like the stars, whose names we call out at night, as if the stars heard, or understood us, or we them.

And with a passion, I’ve been bored here — my imagination sulking in the corner as I plodded endlessly through the mindless chores, boots growing heavier with mud: fold collate staple fold collate staple: the whole body begging the tyrant mind to stop, and the mind, by turns benevolent and cruel, servant to truth one minute and slave to ambition the next, ignoring it.

The arrogance of it all! The real arrogance: to think that I do it. Commander of nothing, fidgeting upon the throne of self. Look behind the curtain for the real power. But you won’t see it, and talking about it only ruins it.

Unpaid bills become friends — left to myself, I wouldn’t have invited them, but here they are, no place else to go. Late at night, tired, I crumple like a dollar bill. I make room, comfort myself with the thought they’ll soon be gone.

Soon enough, it’s all gone. The issues, which like children grow up and leave. The people, who work for a week or a month or a year or years — mostly for free; some of them, like me, to get free — and leave, too, leaving behind some of the best of themselves. The shapes of innumerable days — muscles rippling across the belly of morning, my favorite time; late afternoon like the back of a lover who turns and walks away without a glance; evenings with their dark smells, when I am most free and most afraid — all the days, three thousand six hundred and fifty days, gone too, but where? Where does time go when it passes? Does it pass at all? Or does it merely seem to pass, with heart-rending poignancy?

How odd — my mind plays with these questions, makes a magazine about them. But in my heart, I know the truth — about time, about love, about my need to play the fool. Strange, too, that for all these words, it’s only in silence I approach the deep meaning of things. The mind’s inane chatter, cocktail party mind, guests talking ideas, talking to themselves: so many voices. . . . It’s silence I long for, silence which makes this house of Self a home.

Press your face against the window. It’s silent now, the snow falling fast, heavy flakes like memories melting as they hit. And inside, the words, like sleeping children, lie curled against each other — words of God, words of pain, adrift in a speechless dream. 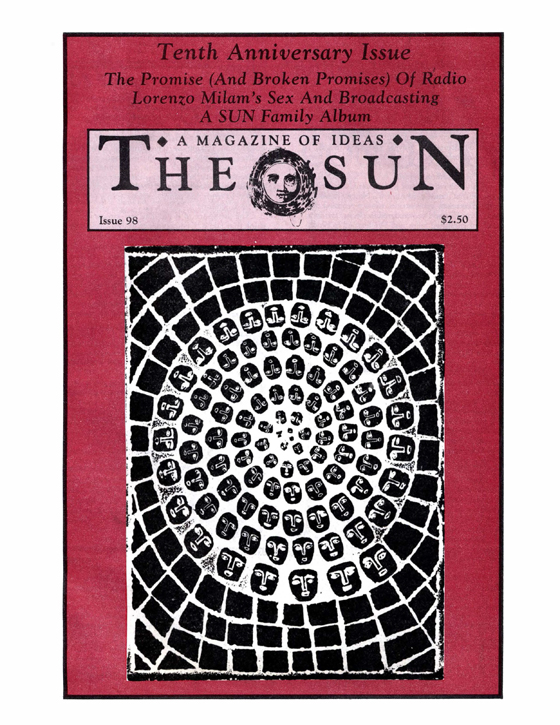