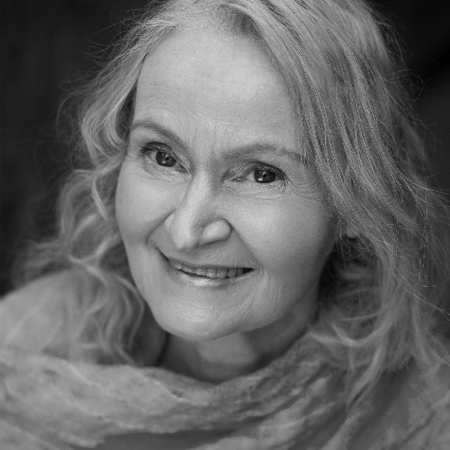 Ellery Akers is a California artist and naturalist. She wrote her latest book of poems while sitting in a camp chair on a hiking trail.

Love In Our Seventies

We don’t take each other for granted, because we know we’re old. Sometimes when we’re bird-watching — field guides, binoculars — happy to be looking at egrets or green-winged teal, I think, One of us is going to die first.

The first was that I was no longer in pain; I could sleep. / The second was that I was finally able to love: all my life I had been more or less shut. / The third was that I lived near a pond. Watching the mallards dunk made me laugh. I was happy looking at dragonflies and even their empty exoskeletons, their shells shaking a little in the wind.

He sits on the mattress on the floor and unties his sneakers carefully. He spreads his laces to the sides of his shoes, as if they deserved respect.

Wanting Things To Be Different

A relapse of Lyme disease: / fever and chills, flickers of pain. / I want to sleep all the time, and my arms ache. / I lie on the steel grate that juts over the stream.

My Sister Blazed Through Her Life

I was so in love: I listened to his messages on my answering machine again and again, mooned over every tan Nissan that looked like his, carried breath spray in my pocket, left notes in his shoes.

I’d broken up with my boyfriend, and my sister had broken up with hers and sprained her ankle. She was furious and weeping and mad at herself for weeping, because her mascara was running. She sat in front of her mirror and stroked on fresh mascara, picked up her false eyelashes and stuck them on as if she hated them, slapped her cheeks with her powder puff so hard that powder floated around her in the air.

Pond: After my mother’s funeral, I come back to the pond. It’s strange to be in the world without her. The lies that used to flutter around her are leaving; I can almost hear a rustle of cellophane in the air. I try to wish her well.

The day that it happened, / my teacher had written crap on the bottom of my first poem. / I wanted to throw it into the Hudson / where it would sink with its no / under the gulls, the garbage scows, and the litter.

By the time I left college and became a naturalist, I knew that change was slow and difficult. At thirty I felt stuck, as if my life had stiffened around me, and for some reason, perhaps unconscious at the time, I began to get interested in insect metamorphosis.

November 2007
Thank You Your donations helped to keep our ad-free, nonprofit magazine in circulation last year, funding everything from production to distribution. Learn how you made a difference last year. Learn More