Compromise | By Our Readers | Issue 132 | The Sun Magazine
close

We all eventually learn that compromise comes in sizes.

The first thing I remember about it is my mother telling me I would have to learn to compromise, as if it were some rite of passage into adulthood. It meant putting aside what she must have considered “youthful idealism” — my impatience with a world that often did not seem to run on basic principles of common sense. “Compromise” sounded vaguely fearsome and distasteful, akin perhaps to the way adults moved through the streets. They marched, they teetered on weird shoes, they immobilized their bodies even while in motion. Before there were breasts to bounce and startling attacks of adolescent self-consciousness to reckon with, I always ran through streets, preferably in my sneakers and shorts, all long skinny legs and flying tangled hair. I dodged in and out of the stiff adults; my aim was never to stop the forward motion, but to dart, weave, leap and fly — around corners, across streets, over puddles, through cars, pedestrians, trees, dogs and all the traffic of life. It was freedom, pure and simple freedom, and to this day I can’t think of a better definition of freedom than never to have to stop the forward motion.

That was what I intuitively feared they meant by compromise — that some day I would have to stop for the light; change my clothes; put on shoes I couldn’t run in; and teeter, sedate and half-alive, with the rest of the grown-ups going down endless sidewalks to nowhere. If they were really going somewhere, I reasoned, there would be more spring to their step. They often moved quickly, in their fashion, but it seemed that was because they wanted to get it over with, this moving about, this old in-and-out of stores, cars and restaurants. And that kind of compromise — giving up the joy of living in order to stay alive — is something I resented long before I could articulate it, but I fell victim to it just the same.

Two years ago, unable to find a harmonious job in a new city, I fell smack into the old Survival Trap. I began working in a mind-deadening, fluorescent-lit sweatshop — rising every morning in the dark, standing for eight hours at an assembly line, going through motions and actions that had meaning only in the narrowest sense. My fellow workers and I were not regarded as forward-moving humans with histories and needs, but as expendable pieces of a machine. Naturally, our pay reflected our expendability and the constant threat of layoffs hung over us like the smoky cloud in the lunchroom. Still, the bills had to be paid, right? I stayed on. My ankles swelled, my back hurt, my feet no longer fit into my shoes. Still I stayed on. Pieces of me fell away bit by bit — my writing, my artwork, my creative energy, my self-esteem, my projects, my dreams and eventually my very life; all grew smaller and smaller as I compromised them one by one to live this life. Where was the running, jumping and flying now? I could hardly walk sometimes when I left work, so never mind that. I had to quit my roller skating class (roller skating had always been a prime dream image of freedom for me) because of my schedule. My body grew stiffer and stiffer. After all those years of putting it off, I was finally hardening into that adulthood I had so dreaded. I had given up living in order to “survive” and it was a poor trade indeed.

Compromise comes in all sizes, and the little ones really don’t matter; if you want a seafood dinner and your friend wants Italian, there’s always spaghetti with clam sauce. But compromise of this size and scope is almost too big to bear the same name.

In searching for the opposite of compromise, I came to two very similar and powerful images. The first is the Tarot card “The Fool,” who stands at the edge of the abyss, the unknown, ready to continue his journey into total uncertainty, the wind in his hair and a radiant smile on his face. What a fool! The other image is from one of Castaneda’s Don Juan books where, at the very end, our “hero” leaps off a cliff into thin air — because in order to keep moving forward in his journey that’s what he has to do.

That’s where I am right now — between those two images. I guess you could say I came to my senses just in time to become a real fool. But at the very least, oh joy of joys, I can feel the wind in my hair again.

My mother didn’t love my father — that’s how I felt as a child. She praised her first husband, who died thirteen months into their marriage: “What a wonderful, poetic, sensitive, full-of-life man he was,” compared to my father, “a good man, with a good heart, who works hard and is devoted but is boring and he doesn’t read or think much and we can’t really talk.”

When I was sixteen my mother died. I found some letters in the attic that she and her first husband had written to each other. Their love and joy for each other jumped off the pages at me. I found a diary, too, but not much about my Dad — the joy was gone, the spirit, the hope. I cried and cried and cried. Although I had heard it in so many ways from her before, these writings focused her pain all too clearly.

That’s when the seed was planted, but I didn’t know it then: I wasn’t going to “settle for someone,” like my Mom did. I’d never do it! I was going to be different.

But my past, my beginnings, seem not only to trail behind me, they extend in front, too.

I’ve been with a fellow for about three years now — a good man, with a good heart, who works hard and is devoted to me but is often boring and he doesn’t read or think much, and we can’t really talk.

Isn’t it strange? There’s nothing worse than an individual who compromises himself or herself, unless it is one who is totally uncompromising. When a word splits into opposite meanings like this, one wonders if we need two words instead of one; or, more likely, if the word contains a paradox.

On the one side it is claimed that compromise is the method by which mature adults master the world. Genuine maturity means being willing to give up a little of what you want (even, at times, a little of what you think) to accommodate the inevitable differences between what other people want (and think). Without compromise, this side says, there is no social life, no society. None. The need to compromise grows out of the inevitable space between people which makes them different, which makes them individuals. To come together, we must value our own differences and the other’s. If we only respect our own wants and thoughts, we end up totally alone.

(And the respect has to be genuinely felt for compromise to work. If we only show respect in order to get respect, we end up even more alone, estranged from ourselves as well.)

That sounds good, the other side of the word argues. That sounds fine for issues of expediency, for those differences between people (or nations) that don’t really matter that much. (It would be easier for me to meet you on Wednesday, but I can adjust to Thursday.) But what about areas of value that are different between two people, areas that really count? Can these ever be successfully compromised? (I know you want to bully me, but you can’t, even if you are stronger, richer, my father, my boss, my teacher, my president, etc.)

So, it seems that maybe we do need two words here instead of one: a positive word for giving in in non-value areas, and a negative word for giving in where we should stand fast, where our values are at stake. Paradoxically, one area of value for me is the little everyday compromise itself. Even in matters that don’t matter much in any individual instance, I don’t want to do more than my share of the compromising more than my share of the time — because somewhere in human nature exists a strong tendency to feel that whatever has been given into (given up) once is already the new starting ground for future negotiations. With people who consistently try to bend you toward their will in little ways, one has to watch to make sure that slowly, almost without knowing it, one isn’t giving up one’s own ground. There have been people and nations that would never give up a lot all at once that have lost their souls anyway, by giving up a little a lot of the time, just for expediency, just to make things run smoothly for now.

In the final analysis, I get the feeling of an infinite regress developing: the two opposite meanings of this word facing each other, like two mirrors, and disappearing into obscurity. To be able and willing to compromise is so important, the whole world depends on it. Yet the area we must be most careful not to compromise is compromise itself. In the end, things always go to hell in little steps, not any one of which would have been worth the bother. 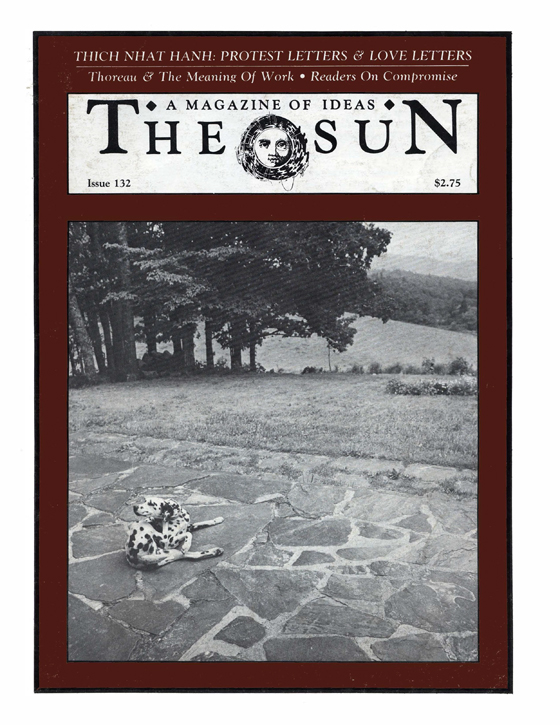