I knew old Wiggins years before he scandalized the area newspapers, because he was part of my childhood, like the pine tree with the tire swing and the forbidden, ancient barn I explored in secret. Old Wiggins lived in a one-room cabin on a rise of land just down the road from my grandfather’s farm, and I was his friend, he said. Now I think he called anyone who came to see him a friend, for certain reasons of his own.

Old Wiggins had just finished off his sixties when we met. I was twelve and a newcomer, sent to stay with my grandparents while some distant storm tried to clear itself. He was only a little taller than I was, white-haired and thin like coarse fabric stretched over sticks: his hands rasped when they touched things, but his eyes were burning, brilliant white-blue. He wore flannel plaid shirts and green work pants, summer and winter, and heavy old black shoes; and I remember his cabin, lined with rows of bent-nail pegs where dozens of his shirts, pants, and undershorts hung in logical pairs, a year-round clothes calendar: on Wednesday, January 3rd, I wear the black watch double-pocket; on Thursday, June 17th, the hanky-red short-sleeve next to the window; on the first day of autumn, the red one with russet buttons. By my grandfather’s standards, old Wiggins was a poor man, but my grandfather did not own a greenhouse and Wiggins chuckled at my name and said, “The gentleman farmer’s grandgirl!” the day we met. I had gone through the fields and found Wiggins in the glass box that jutted out from the shingles and tarpaper of his home. He was bent, like the miser in my books, over a series of shallow boxes, stirring with a heavy wooden spoon, and I stood watching for a long time — the sun was hot near the glass — before he looked up, shocking me with his tiny, sharp eyes. We stared at each other through the glass squares, balanced, on the roots of our toes, gazing and matter-of-fact.

He stood up easily — and back then I would expect him to — and came out of his plastic-draped door. “You, is it?” he greeted, and I kept my hands behind my back and said, “I like your greenhouse.”

“Oh, you do, do you?” he said, grinning, picking the palm of his left hand with his right. “Well, I don’t grow flowers like some people do, I spend every day out here, it gotta be tended careful.” He squinted at me and I wondered why I was embarrassed by his remarks: I thought that he wanted a particular response and I could not find what I was feeling. “What do you grow in there?” I asked at last.

He burst into a scream that pounced on laughter, and slapped his leg, beating dust from his stained pants. “Nothin’, girl; nothin’ I can help, anyhow! No, I don’t grow nothin’ — wanna see?”

“Sure,” I said, to stop his laughing, and then he let me discover, in the years before the reporters, the policemen, the photographers, the doctors and the courts, the madness and the rumors, his late afternoon’s pastime and worldly pleasure: his fabulous, miraculous, mysterious dirt.

He showed me the boxes, lined and stacked to catch the proper sunshine: a full day’s worth for the dark, loamy earth from the forest floor; half a day for the rubbled topsoil beneath the cultivated alfalfa; an hour or so for the smooth clay mosaic that occupied the largest box on the floor near the door. Each box had its separate spoon, always of wood, always hand-carved and aged itself, in the same hours as its appropriate soil companion in the little greenhouse. In later years, old Wiggins would allow me to stir the coarser grains under his supervision, when his shoulders were too sore, he said; though I am sure now this was his only way of giving me something precious, since he had nothing else but his flannel shirts. Now I have some of his shirts, not given but taken, and not so much taken as protected, and they are not from him, as this was. Every afternoon, he would gently, tenderly, fold his dirt with the proper spoon, sifting the dry, sun-massaged crust down through the layers, bringing the deeper particles to the surface, softly, where they could be cleansed and benefited, he said.

“What’s it for?” I asked that day, and it was the only day I ever asked.

“What’s for?” he repeated, as though I could not help but know. “Think on it,” he said, caressing the small square of sand between his knees. “Think on all the things what grows from the Earth, and all how nature brings ’em back in spring. All from earth, the dirt, the soil. Replentied, always replentied. Why, here I add what in nature she can’t, the stuff from in the sun to the underparts.” He let his caked fingers brush the granules, lovingly, lastingly. “Think on it, girl. Think how men is left for the cities, and how they is old and tired. They left what they was, girl; they left what they was, an’ they come back to me so’s they can find it again.”

The weeks that summer at my grandfather’s house left me to myself; and in them, I watched old Wiggins finish two flats of ready-dirt, as he called it, and between us was never again the need for explanation: we were what we were. In the morning of a Monday, on the hard-packed pathway inside the greenhouse, he prepared a bolt of cheesecloth by cutting it into large triangles with finely-whittled wooden knives, aged, of course, to each wedded dirt and spoon. The thin edge ripped rather than cut, but there were dozens of patches soon enough; and then old Wiggins began the slow spooning of the ready-dirt into the exact center of each piece of cloth, slowly, carefully, patiently, not spilling one crumb or dropping it too suddenly; but rolling them gently, gently, gently. I could not move, my face itched, the sun seared through the glass, my back stuck to my shirt; but he went on and on. I could not breathe, but I did not leave him. Gently, gently, after the ready-dirt was piecemeal placed in all the cheesecloth, old Wiggins began, one by one, to bring the corners up, slowly, tenderly, endlessly, to tie them with a length of thin hemp and place them side by side in a burlap-lined wooden crate, marked with a peculiar scribble and placed in the cabin’s northwest corner.

It took a year, he told me then, for the dirt to be ready, and three days and nights to thoroughly cleanse the box by soaking it in the spring out in the woods behind his cabin. Then came the time to collect more raw dirt, and I was not, he said, able yet to go with him to his stores, as he called them, even though he was the only one who knew where they were. I did not understand his implications then; the world was contained by his greenhouse and my grandfather’s farm and was unmoving, like a pond, enclosed. But he taught me how to whittle the spoons of applewood, with the finely-honed pearl-handled knife that was sheathed in cheesecloth and stored under a pyramid-shaped box by his bed.

Old Wiggins and I were clearly defined in those days, and simple; his forgotten years and my unknown ones meshing like matched folds in a net, line on line, space on space. The people who came to see him mystified me. I heard many of them cry, and sometimes talk in terrible, throaty voices of pain and death. They were distant from us, closed off and helpless; some would stare at me with wide, wet eyes, heads trembling; most did not see or hear anything but old Wiggins himself. He nodded, but never agreed; he sighed, but never sympathized. I know they always said that only he could help them now and he always said, no, friend, it comes from you, like the good earth itself.

“A pinch a day,” he instructed, “in pure spring water, in the full sun of the noontime.” I wondered often if they cried at home and trembled all the time; I could not understand how they could be helpless in front of Wiggins’s eyes; now, so long from then, I think they must have been at their best. “How can I ever thank you?” they asked, and Wiggins would dismiss them always without trying to explain. “When they is stopped relyin’ on me, then I’ll be knowin’ I is done what needs to be done,” he would say after they had gone. “What I do f’em don’t mean beans an’ that they gotta find alone. If’en they find that, why, girl, then they is never gonna need no wizard dust no more, is they?” and his teeth would blink on and off in the twilight of his grin.

It was not that Wiggins occupied a place more distinct for me than the rest of life: the unspoken bond between us existed as part of everything else, in the same way we knew his boxes of dirt to exist. It was only years later, in the wake of public discovery and outrage, in the exposure of his violations of standards of sanity, that he acquired a separateness for me, and a separateness that from my adulthood touched the child in me and made him an artifact of memory. The people he had cured, or the people he would insist had found their curing natures through him, testified in his behalf, of course; but their words were archaeology. I could not speak out; what had been old Wiggins and me could not be reviewed; the past that framed us had slipped sideways, dodging recollection, and in its place was opinion and perspective, nothing more. I visited him once in his room, or rather I observed him there; the whiteness of his robe and walls stung my eyes; he was withered and small, his hands, huge and leaf-like, perched on his knees. Once he looked up at the window in the door and his eyes flamed, hot-blue in the topography of his face; and I left, no gentleman farmer’s grandgirl. They would go on, years past his physical death, with their accusations of quackery and madness, and never understand what they had missed, or why his magic worked; or why it was that magic worked at all: old Wiggins and me and the boxes I stirred, the boxes of dirt; the wonderful, magical, miracle dirt. 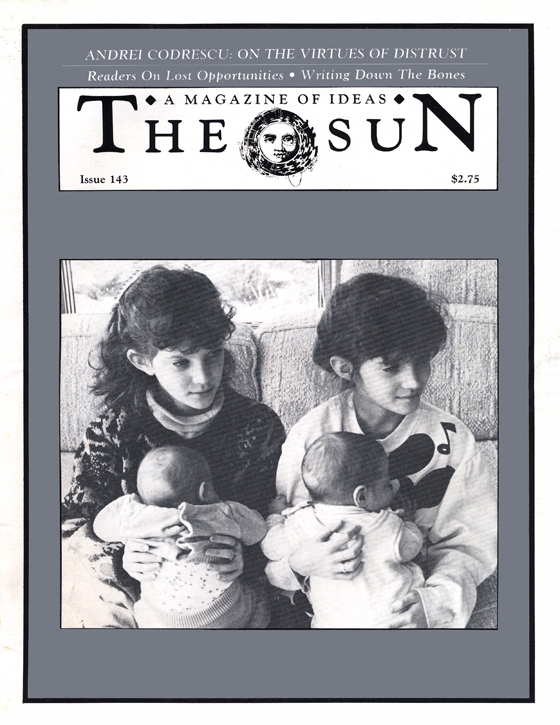 Aliens In The Garden

On The Virtues Of Distrust

An Interview With Andrei Codrescu