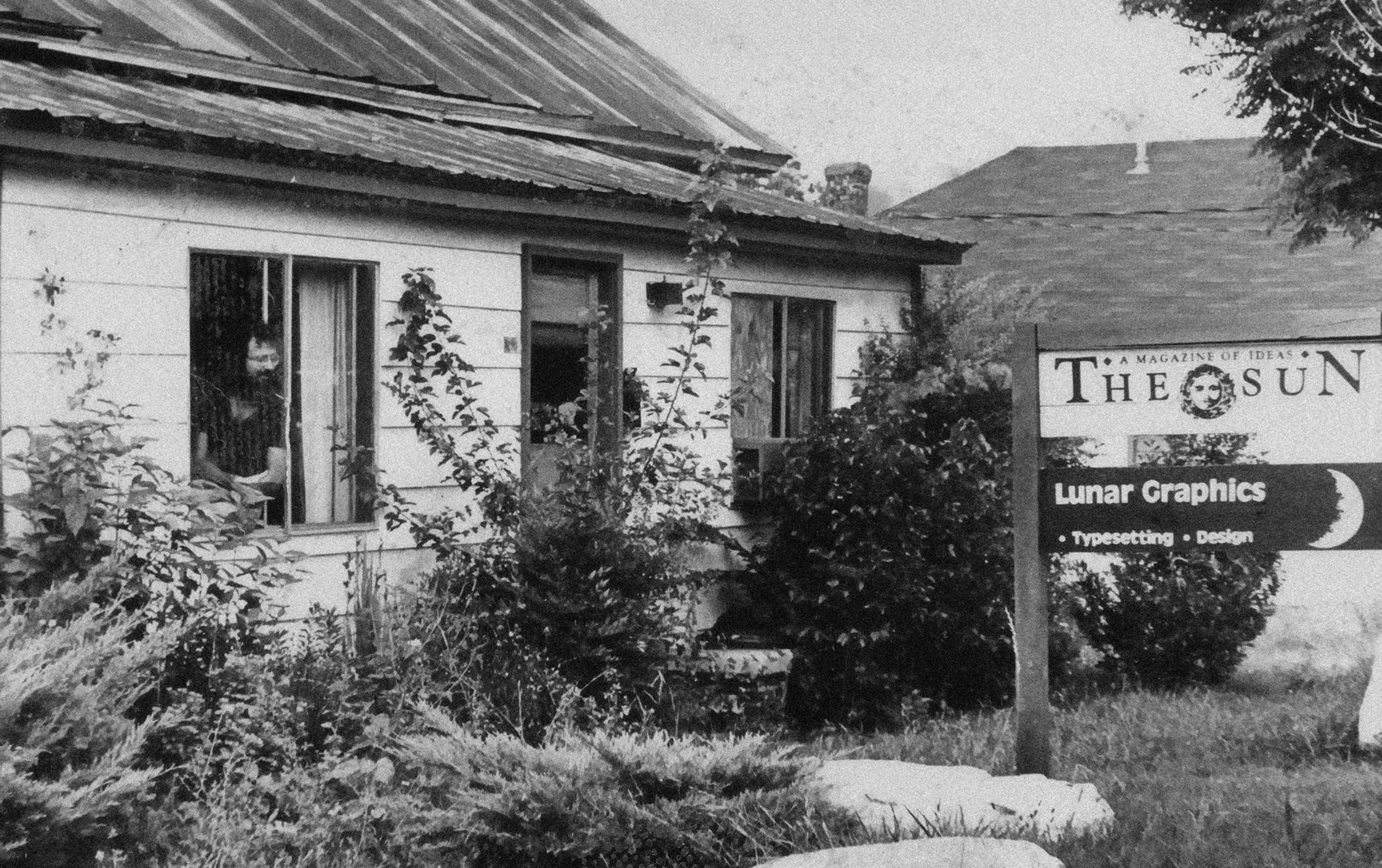 The first issue of The Sun came out in January 1974. The war in Vietnam was winding down, and Richard M. Nixon would soon resign the presidency. It was also the height of the energy crisis. The OPEC oil cartel had raised prices, resulting in lines at gas stations and debates about reducing dependence on Middle Eastern oil. So when Sy Safransky and coeditor Mike Mathers were deciding on a topic for the first issue of their new magazine, they chose “Energy.”

Sy was in charge of the editorial end, and Mike did the artwork and design. (Mike would depart the following year.) They had no office, only a backpack and the back seat of Sy’s car. There were no personal computers, so the entire issue was produced on a manual typewriter. Sy borrowed money to buy paper, and a friend who worked in the local university’s printing department agreed to make two hundred photocopies of issue number 1. The original wasn’t properly centered on the xerox machine, however, and on some pages the last few letters of each line were lost. So when spiritual teacher Ram Dass, in answer to an interview question, said, “I don’t eat meat,” it came out in the magazine as “I do eat meat.” Sy hand-corrected the line in all two hundred copies. Though the cover bore a price of twenty-five cents, he was too embarrassed to charge for the misprinted magazine and gave it away for free.

To celebrate The Sun’s thirtieth anniversary, we’ve decided to give away that first issue again. We want to show how far the magazine has come and, more importantly, to provide proof of how a small, idealistic endeavor can develop a life of its own, exceeding even the wildest dreams of its creator.

At the start of a journey, no one can predict how it will end — not the experts, not the critics, not even ourselves. The only way to find out is to keep walking. Perhaps seeing how The Sun started will inspire some readers to take an implausible first step of their own.

1975
Sy quits his day job and rents an office, a dormer room above an independent bookshop. Sy’s wife, Priscilla, becomes the third member of the staff, after Sy and cofounder Mike Mathers. The June cover features a sun face based on a tarot-card illustration. (The same face is still used in The Sun’s logo.)

1977
The Sun buys its own printing press, and the Sunbeams section appears for the first time. The office moves to a dilapidated house on West Rosemary Street in Chapel Hill. The pipes freeze, and pigeons live beneath the rafters. The birds’ cooing in the morning is pleasant; the dried droppings that drift down from the attic are not.

1978
The printing press keeps breaking down, and Sy sells it to pay for the cost of printing the next issue. Sy’s marriage breaks up, and he installs a bathtub at the Sun office so that he can live there. The Readers Write section (then called Us) appears for the first time. The topic: Pain.
Circulation: 600

1979
Sy wants The Sun to be able to pay its debts, but he’s distrustful of financial success. When the bills pile up, he writes a letter to subscribers, asking, “Can you loan me $100?” A group of business students analyzes The Sun’s finances and concludes that “continued operation of the publication relies entirely on the efforts of Safransky, who faces a monstrous undertaking. . . . [He] may want to seriously consider minimizing his losses at this point.” Their prediction: The Sun will not last another year.

1980
The Sun can no longer afford Sy’s $100-a-week salary, so he gets a part-time job digging ditches and shoveling manure. Ram Dass speaks at a Sun benefit that raises $4,000, a quarter of the magazine’s annual budget.

1981
When Sy’s Rambler breaks down, he offers a lifetime subscription in exchange for a car. Two readers take him up on it.

1982
The Sun holds a yard sale and silent auction of donated items to raise money. As her contribution, an author offers to write an irate letter for the highest bidder: to anyone, on any subject.

1984
The largely volunteer staff of eight includes Sy’s wife, Norma, who keeps track of subscriptions on index cards. To overcome his prejudice against being a businessman, Sy wears a tie to work for six months. The Sun is sued over an essay published two years earlier, in which the author wrote about a friend’s tragic death. The case is thrown out of court but costs the magazine $2,000 in legal fees.
Circulation: 1,600

1985
A benefactor donates the money to print the first Best of The Sun anthology, A Bell Ringing in the Empty Sky, Volume I. (Two more volumes will follow.) The Sun acquires tax-exempt status and receives a grant that enables it to begin paying authors: $10 for a poem, $25 for a short story or essay.

1986
Sy writes the first annual fundraising letter, inviting readers to become a “Friend of The Sun.” A grant from the North Carolina Arts Council allows The Sun to start soliciting subscriptions by direct mail, ushering in a new era of growth for the magazine. Within a year, the number of subscribers will increase fourfold.
Circulation: 2,000

1989
Now making ends meet thanks to its growing subscriber list, The Sun moves out of its old office and into a bigger house around the corner, formerly a home for unwed mothers.
Circulation: 10,000

1990
Sy, who has always dreamed of The Sun being completely reader-supported, takes the plunge and drops advertising from the magazine. The Sun receives the first of four Alternative Press Awards from Utne Reader.
Circulation: 12,000

1991
The meteoric rise in the number of subscribers levels off unexpectedly, and The Sun must cut back on expenses. Having trouble paying the mortgage, Sy considers selling the house. Then a North Carolina philanthropist appears with a $50,000 donation.

1994
The Sun’s new North Carolina printer announces it no longer wants the magazine’s business, presumably because of the editorial content. The National Endowment for the Arts turns down The Sun’s grant application because the magazine is “too confessional, too therapeutic.”
Circulation: 23,000

1998
Works from The Sun appear in the Best American Essays and Best American Short Stories anthologies. The magazine launches its website, www.thesunmagazine.org.
Circulation: 42,000

2001
As the magazine’s staff grows, the front porch is turned into office space, and a bathtub is removed to make room for storage.
Circulation: 51,000

A Plan To Change The World