I recall the first time a white classmate told me that I should trust the police. I wondered what it was like to grow up in a society that was designed for your safety. I often feel anxious simply in the presence of authorities. . . .

[At the protest] the sun burns low on the horizon. An elderly black woman passes around candles, and we light them. The faces of individuals murdered by police are held up while we speak their names: Oscar Grant. Tony Robinson. John Crawford. Tanisha Anderson.

We bow our heads for a moment of silence. My heart is heavy but strong. I am meant to be here, demanding change and fighting inequality. I will not give up.

Some years back, a black male coworker asked me, with open disgust, why I wore my hair the way I did. At the time, I sported a pretty damn fabulous weave made of real human hair, luxurious, jet-black, and wavy — no doubt the tresses of a now-bald Hispanic woman. My coworker had intended to put me on the defensive, but I caught him off guard when I told him, “A black woman gets nowhere in this country with short, nappy hair.” The interrogation stopped right there.

Hair is so political in my life it makes me want to cry. Society wants me to be ashamed of my natural hair, and insists that I chemically straighten it to poorly approximate white hair. I have only so many alternatives, none of them completely satisfying.

I’ve since lost the weave, as it was too expensive to maintain, and have settled on more economical braids of synthetic fiber. They don’t elicit as many nasty comments, but I still have to deal with white women who corner me in elevators and ask, “How long does it take?” Taking the liberty of touching a couple, they wonder, “How much does it cost?” And then, the kicker: “Do you wash them?”

As a child, I did not think it out of the ordinary that our family had a slave chair in the living room. It seemed every house in Georgia had some sort of antique or what-have-you from before the Civil War. Sagging cane seat, pine wood, ladder back, broomstick arms — the chair was a relic from the slave quarters of a bygone plantation. . . .

I found her in the living room, sitting in the slave chair. She wore my mother’s hand-me-down dress. It was too tight on her, I remember, and her whole body was covered with broken light from the venetian blinds. Her eyes were closed, as if her mind had wandered off in search of something and, finding it, discovered it to be a huge disappointment.

She appeared so sad I could have broken down and cried right there, but then an amazing thing happened. I suddenly felt shot through with adrenaline, all sweaty and tossed about, and at the same time outraged, as if she had offended me. What are you doing there? I thought. Get up, get up, get up!

After that, I thought of Grovinia in the slave chair so many times and with such a mix of guilt and misery that I began to worry about myself. I made up ever-changing stories about what had been going through her heart as she sat in the lap of her history, surrounded by the stories that lived inside the chair. Did she muse over the slaves who’d sat in it? Did she wonder why she had to sit in the back seat of our Ford when my mother drove her home? Did she hate us in secret?

Seeing Grovinia in the slave chair ruined me. Now I was aware of things. I couldn’t go back to the place where the worst thing in life was a misplaced salt bowl. At night in my bed, I wondered if we were any different from the family that had first owned the chair.

There’s not a sharp division between what’s conscious and what’s unconscious. It’s more of a continuum. Sometimes we’re not fully aware of the extent of our bias. We know we harbor some stereotypes, but we don’t realize how much they influence our actions and our thought patterns. The bottom line is, when we see larger percentages of blacks in prison or being convicted of certain crimes, do we stop and ask ourselves whether it’s a result of racism in the system and in the culture? I think the refusal to ask those questions is rooted in racial bias. Whether it’s conscious or unconscious, the harm caused is the same.

Reparations need to start with an apology, but an apology is meaningful only if you understand why it is necessary and support its being made. And it must lead to consequential action. To simply continue with business as usual would make the apology a lie.

I hear talk about reconciliation or restorative justice, but there is a lot of work that has to happen for reconciliation to become a real possibility. Otherwise we have what theologian Dietrich Bonhoeffer called “cheap grace.” Some people are ready to address the relational aspect, but when you bring up money, that is the end of the conversation.

African American people need to express their deep sense of outrage and anguish about the injustice that has gone on in this culture for many, many years. If it doesn’t get expressed in words, in truthful words, it gets expressed physically. Either it kills them because they carry it around — like an ancestral tooth that each generation inherits — or it comes out through actions that can be destructive to the individual or to others.

But it gets tricky. People inherit these injustices and these outrages as a group, so even though the anger may be expressed by an individual, the individual is also speaking for the community. The listeners must respect this. It takes the power out of the situation if the white people listening say, “Wait a minute. I understand that black people have been enslaved and brutalized, and that all this crushes a family and a race of people, but I’ve never done it myself.” The ritual is destroyed when ancient pain is challenged in this way.

Slavery and segregation did far more damage to blacks than a couple of decades of remedial programs have been able to fix. There are many explanations for the existence of a black underclass in American cities, but all the talk becomes frivolous when it drowns out the cries of the past. Past, but echoing still: the groaning voices; the ringing chains; the sails of the slave ships sighing in the wind. And later, too much later, guns and hoses and dogs and clubs, heralding what some hoped was a solution. . . . Perhaps a kind of healing is possible, but only by hearts big enough to contain an uncontainable grief.

My first love was a 1965 Mustang. At the age of sixteen I inherited this car from my older brother. Air shocks lifted the back end above fat racing tires. Its rims shone, and its windows were tinted. The muscular frame was finished in sky blue. I felt cool parking it in the student lot at school or running errands for my mother.

The police stopped me quite a bit, despite the fact that I was a safe, defensive driver who minded the speed limits. I figured they just wanted to get a closer look at my car — and at the good-looking young woman behind the wheel. But one day an officer told me the real reason he’d stopped me: he’d assumed the car was stolen. In amazement I asked why he would make such an assumption. It turns out he didn’t expect to see a young black woman — even a hardworking, college-bound one — behind the wheel of a car like that. I didn’t fit the profile of a hot-rod driver. I asked the officer what type of car he expected a black woman to drive. He didn’t answer.

Rosa Parks was prepared for that day, December 1, 1955, on the bus in Montgomery, Alabama. She had gone to the Highlander Folk School, where Martin Luther King Jr. learned nonviolence. She was the secretary of the NAACP in her community. But at the moment she refused to move to the back of the bus, as blacks were required to do, she had no assurance that the theory would work, that the strategy would succeed, nor that her friends would be there with her in the aftermath of that decision. It was a lonely choice made in isolation, but it helped to change the lay and the law of the land.

I’ve often asked myself how people find the courage to make a decision like that, when they know that the power of the institution is going to come down on their heads, when it could easily lead to loss of status, loss of reputation, loss of income, job, friends, and perhaps even meaning. The answer comes from studying the lives of the Rosa Parkses and the Václav Havels and the Nelson Mandelas and the Dorothy Days of this world. These are people who understand that no punishment that anybody could lay on us could possibly be worse than the punishment we lay on ourselves by conspiring in our own diminishment, by living a divided life, by acting and speaking on the outside in ways not consonant with what we know to be true on the inside.

Finally. As I approach these middle years with no apologies, I have come to love the me inside this body God covered with earth-dark skin. I no longer need to wish for a body the hue of sunshine as a prerequisite for sacred love. Feeling new rhythms pulsing through these veins, my body finds comfort in being an abode for the loving spirit of a “black woman.” 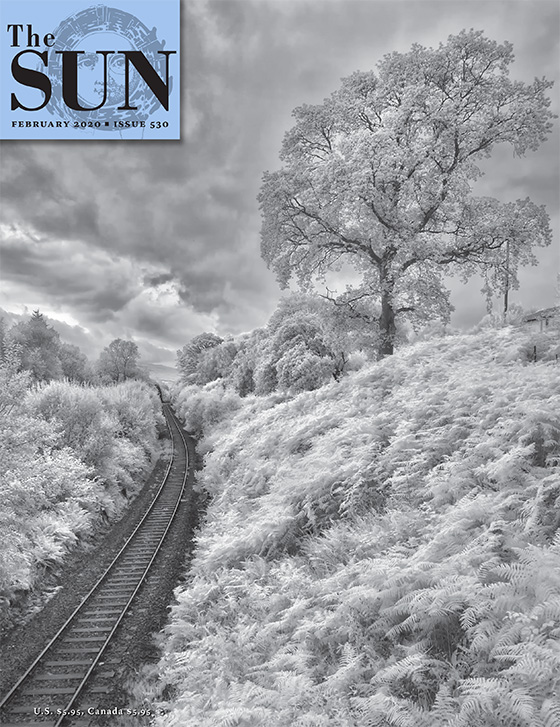 On Foot And On Faith

By Peace Pilgrim
The Sun Interview