The Clearing In The Forest

In the middle of the forest there’s an unexpected clearing which can only be found by those who have gotten lost.

The clearing is surrounded by a forest that is choking itself. Black trunks with the lichen’s bristly beard. The jammed trees are dead all the way to the top, there a few solitary green branches touch the light. Underneath: shadows sitting on shadows, the marsh increasing.

But in the clearing the grass is curiously green and alive. Big stones for a house, maybe I’m wrong. Who lived there? No one can help with that. The name sleeps somewhere in an archive no one opens (only archives remain young). The oral tradition is dead, and with it the memories. The gypsy race remembers, but those who can write forget. Write it down and forget it.

This house, where the hired man lived, hums with voices. But the people in it die or move away. The history ends. The place stands empty year after year. And the little house becomes a sphinx. At the end everything has gone away except the foundation stones.

I’ve been here before somehow, but it’s time to leave. I dive in among the briary underbrush. To get through it you have to take one step forward and two steps to the side, like a chess piece. Slowly it thins out and the light increases. My steps grow longer. A path wiggles its way toward me. I am back in the communications net.

On the humming high voltage pole a beetle sits in the sun. Under his gleaming shoulders his flight wings are lying, folded as ingeniously as a parachute packed by an expert.

Robert Bly sent us this new poem of Tomas Tranströmer, the Swedish poet. This Fall, Sierra Club will publish a new book of Tranströmer’s work, which is being prepared by Bly. Bly is the author of nine books, including Light Around the Body. He was interviewed in THE SUN #37. His latest book, from Sierra Club, is News of the Universe/poems of twofold consciousness—a unique anthology which traces man’s growing recognition that there are many kinds of consciousness besides his own operating in nature. 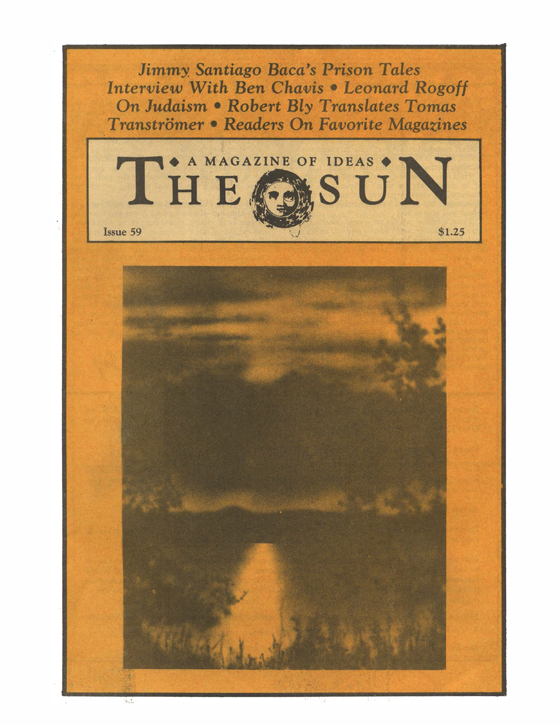 By Our Readers
Editor's Note