Walking barefoot yesterday over ground that kept changing — no sandals smoothing it out, mediating between me and the rough body of the Mother, crunchy gravel, or the soft grasses and wet leaves, or the Mother’s sting, a sharp thorn, the pain unarguable and immediate.

This car a cell, jail cell, meditation cell, cell in the larger body. Is this road the length of my love? The width of my embrace? The measure of my devotion? And is this turning of tires on smooth asphalt — frozen dark river on which I ferry my children back and forth, up and down the mountain, from home to home — the steady beat, the reassuring predictability, of my heart?

Pit Stop at Hardee’s: the young woman who waits on me, the “Breakfast Manager,” a go-getter, is moving and talking twice as fast as everyone else, though no one is in line behind me. I suppose it makes sense not to break rhythm. That’s why I rarely stop to rest on this trip. Get through the morning, the day, the life: race you to the end of time, then back. (Last night I dreamt I was dead but had “come back.” I’m really dead, I told a startled friend.) Race you to happiness — is it better to be first or last? Can you really be happy until the last one arrives?

Preachers on the radio, talking fast like the woman at Hardee’s, hurrying us along to salvation, warning of the dangers along the path. They’re the shepherds, and we’re the innocent flock, the condescension ritualized, corporate mentality — foot soldiers in the kingdom of God, one on one against Satan. As I’m listening, I hit a bird at 60 miles an hour. It saw the car, but not in time. “O God,” I moan, as the preacher carries on. “Praise God,” he says, “praise God.”

Talking with C., clutching the phone like a breast, a buttock, crooning my love from 130 miles away — what does the voice carry? Mine is bent by my desire for assurance, reassurance, the tongue of her heart licking my ear — bent but not broken, and I straighten each day, reminding myself to listen inside to the voice that never falters, never whispers or shouts, doubts or pretends.

With the children, as if we weren’t apart at all — perhaps we weren’t. I feel my bond with them — the thick cord of love, frayed by distance but roping us in, again and again, thicker than my hand, reaching for them, thicker than my chest, swelling with pride at a picture they draw, thicker than my massive ego, which crumbles like an old brick wall during the eternal day and night of my love for them.

307 miles. Very tired. Fifty to go. Kids almost asleep. Soon I’ll get out of this cramped dream, wake up, stretch, be a full-sized man again, kick the ground, push the sky, say my thanks.

I’m not the average of the “best” and “worst” in me, the emotional mean to which I imagine I return from my highs and lows. Must I see my life that way — a succession of “good” and “bad” days, stations on the way, a journey “through” time?

I know the time, the answers, I dispense the band-aids and the balm — peace talk, pillow talk, philosophy. But to know nothing — now there’s a challenge. “How do you know you don’t know?” J. asked yesterday — a child’s question, the question that matters most.

How I know I don’t know is by seeing the rotten fruit of my knowing piling up around me — everything that was once ripe and perfect, hoarded for its flavor, its beauty, its specialness — and starting now to smell, to ferment, ooze onto the clean sheets, the clear mind, sticky stuff. This isn’t the wandering through orchards of the mind, naked, hungry but not caring, going nowhere but staying nowhere, knowing the path of peace is strewn with thorns and flowers and is walked with or without shoes, on the stumps of anguish, on the wings of joyous sex, slithered down by the snaky heart, the scheming heart, the scared and silent heart which dies a thousand deaths rounding one bend and grows a new face, a new family, a new ballpoint pen, which writes in fantastic vocabularies: words that can be touched, that move in the hand like small animals or sand, words that enter the ear like guerillas on silent patrol and wreak havoc in the unsuspecting mind, tearing apart the monuments the mind has erected to colonial glory, intellectual dominance, I mean laying it low, the banks and statues and stately facades of the precious Self, raping the wife of ego, and forcing ego to eat the TV, commercials and all, until bloated with more “news” than the old mind can bear, mind itself explodes, like a word exploding into form on a blank page: one word, any word, so long as it’s never been uttered before. Which word is that?

On the road again, in a 1967 Ford that my landlord assures me is “indestructible.” For $400, that’s a deal. I knew this was my next car the moment he said it was for sale, though my rational mind kept protesting — it’s too big, it’s too old, and so on. But my rational mind is like this car — thirsty, powerful, indestructible. Covered with bumper stickers announcing my landlord’s preferences and prejudices, the car is a billboard for his mind, and as I scrape them off and replace them with something or nothing, it becomes a window for my own life. Shall I declare myself, run up a new age flag or two or three, announcing my preferences: for peace, for love, for more miles per gallon? Two generations down the road from a Russian village, Cossacks on horseback, murderous winters and pogroms, I cruise along, 390 horses under the hood, the mad neighing of American power mine at the turn of a key; my generals hold the key to more power, still: no Russian’s gonna fuck with me and, if the generals have their way, nobody’s going to be doing it at all, except the mutants in the ashes, fantasies of uncharred bodies, long and lovely limbs, turning them on.

At the kitchen table, June 21

I’m asked to give a workshop at the local wholistic health center. On what? My friend doesn’t know. She fumbles for the right words, knowing better than to say “on something spiritual.” But that’s what she’s saying.

I have nothing to teach, I tell her. She thinks I’m being modest, but I’m not. I don’t think most people who give workshops on spirituality have much to teach — at least judging from the brochures that cross my desk from schools and centers around the country. The gentle truth that we’re all teachers and students, forever learning from one another, is hustled: honest groping or downright ignorance is advertised as wisdom, even humility, which it would be if no one were charging. Remember lectures? They were free or cost a few dollars. Today a lecture is called a workshop and its cost is determined by the same old market principle the Arabs use to sell us oil. The price fluctuates with the name in lights, and the neon aura of spirituality burning through the foggy mind.

Perhaps I’m being unfair; certainly, in my harsh judgment, I’m forgetting that I don’t know what other people need to learn, or teach. Besides, disappointment is a teacher, too. Disillusionment is the surest way through illusion. When nothing else works, we begin to look within. 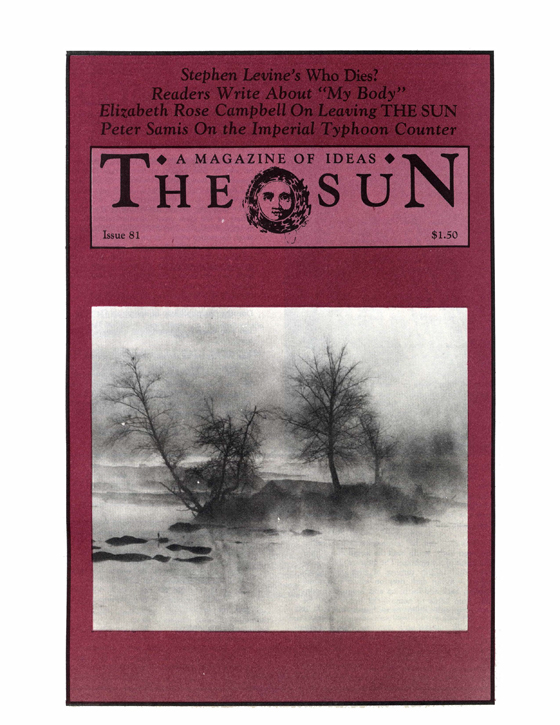 Scribe Of The Imperial Memory